Erick Erickson
|
Posted: May 11, 2018 12:01 AM
Share   Tweet
The opinions expressed by columnists are their own and do not necessarily represent the views of Townhall.com. 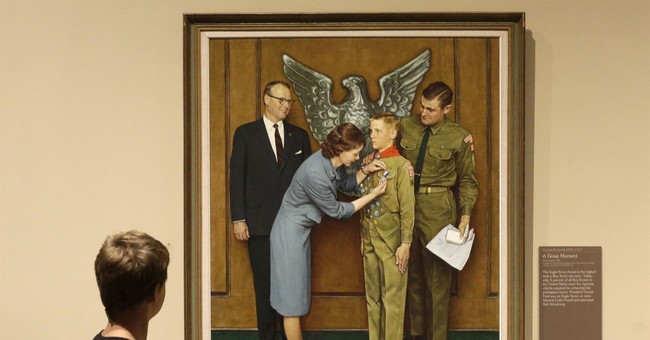 The Boy Scouts of America have always been a pretty explicitly faith-based organization. Though nondenominational, references to God and Creator were woven within the Boy Scouts' documents and behaviors.

The organization grounded itself in a worldview that is archaic in modern times, despite more than 2 billion people worldwide professing a Christian worldview. It just is not popular in elite circles anymore. The Scouts had always balanced its middle-class religious members and the coastal elites who got to claim a faux connection with Middle America through supporting Boy Scouts.

The assault on the scouts took a while to get up to speed, but as the cultural wildfires began to burn across America, scouts were in danger of getting burned, too. Interwoven into the Boy Scouts of America's "God language" was an underlying belief in a Biblical human sexual ethic. As a result, gay and transgender scouts were not welcome in the Boy Scouts of America, nor were gay scoutmasters.

Gay rights activists decided that needed to change. First, political institutions were attacked. Liberal cities, under pressure, began prohibiting the scouts from meeting in local public schools and other public facilities. The scouts fought back and won significant legal battles. The activists moved on to corporate America and began attacking organizations that gave to the scouts. A group once viewed as wholesome suddenly became a pack of bigots. Nightly newscasts showed aggrieved parents of gay kids and the kids upset that the scouts would keep them out. Instead of starting their own organization, they demanded the scouts abandon their long held and widely held views.

The corporate titans who made up the scouting organization's board were at risk of being shamed in their liberal circles. So the scouts began letting in gay scouts and transgender scouts. Many evangelical churches and organizations began fleeing. They saw the gates of sanity had been breached and crazy was about to flood in. It did.

The corporations that had long funded the scouts began to bristle as gay rights activists shamed them. Soon the media was back to tales of woe as gay scouts teared up on camera knowing they could never be scoutmasters.

The Boy Scouts of America caved. People began joking that it was only a matter of time before they started letting girls in. No one is laughing now. The Boy Scouts of America will now be referred to as the Scouts BSA and allow in girls. Yes, some transgender advocates are already screaming that this is discriminatory because there are kids out there who identify as neither boy nor girl.

Truthfully, the Girl Scouts of America is a decrepit organization that has been captured wholesale by the abortion advocacy community. It sells cookies and nothing else of use. Girls got bored, and the BSA took advantage of it.

The Mormon Church is pulling out. Twenty percent of scouts in America have been Mormon, and the church has had a relationship with the Boy Scouts of America for 100 years. More than half of scouts were either Mormon or Christian evangelicals, but not any more. Scouting is in decline. Boys had a wholesome organization to teach them godly values and how to be men. Left-wing activists, peddling all the corrupting influences of a secular world, went to war. The scouts chose to surrender instead of sticking with their core constituency. They will linger on, limping, as a left-wing advocacy group. But the Boy Scouts of America are no more.

Ex-Gorsuch Law Clerk Takes a Blowtorch to the Imaginary Law Violations the FBI Cited in Trump Raid
Townhall
David French accuses DeSantis of attacking the First Amendment and it does NOT go well for him, like at all
Twitchy
Documentarian Discovers Some Unusual Shots in His Jan. 6 Footage That Blow up the Dem Narrative
Redstate
Watch: Huge Mob Flashes California 7-Eleven and Picks It Clean
PJ Media