Erick Erickson
|
Posted: Sep 23, 2016 12:01 AM
Share   Tweet
The opinions expressed by columnists are their own and do not necessarily represent the views of Townhall.com. 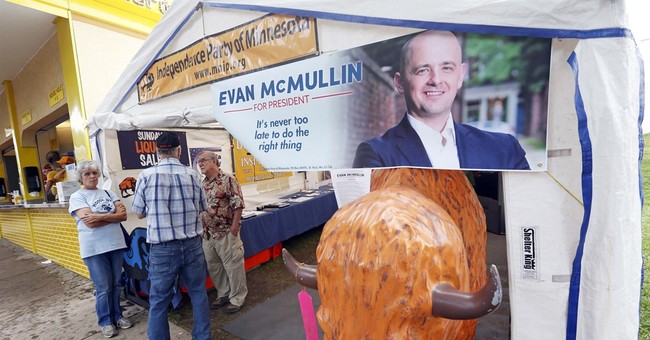 That is not the biography of Donald Trump, a Wharton grad who claims he can relate to the poor, though he had a privileged background far removed from life's struggles. It is the biography of Evan McMullin, a 40-year-old who spent a decade in the Central Intelligence Agency fighting terrorists.

McMullin, like many Americans, surveyed the 2016 landscape and hoped a conservative would win the Republican nomination. McMullin did not wake up in January thinking he would run for president. But six weeks ago he found himself compelled to run for president as an alternative to the profoundly unserious candidacies of Hillary Clinton, Donald Trump, Gary Johnson and Jill Stein.

"Someone needed to step up," he said. It is a principled fight for him. He, like many other principled conservatives realized much of their movement came with a price tag, but McMullin believes his principles and values are not for sale.

His is an intriguing alternative. Right now, voters in 27 states can vote for McMullin as either a candidate named on the ballot or a write-in candidate. By Election Day he is on track to be on 40 of the 50 state ballots. He admits his candidacy is a long shot, but insists someone needs to stand up for mature leadership, responsibility, and conservative values.

After his decade in the CIA and his time at Wharton Business School, McMullin worked for the investment banking division of Goldman Sachs in San Francisco then joined the House Committee on Foreign Affairs as a senior advisor. He learned domestic financial policy at Goldman Sachs and helped shape the Republican foreign policy in congress by drawing on his time abroad.

The reality is Evan McMullin's candidacy is a long shot. His best shot is winning a few states to throw the race to the House of Representatives where, though he may not get the presidency, he might ensure neither Trump nor Clinton gets it. To do this he would have to win a few blue states, which though difficult is not impossible. Surprisingly, he is already beginning to register in polls in red states like Utah and purple states like Virginia.

Frankly, Evan McMullin may actually serve a more important role in 2016. Though he may not win, he might at least provide disaffected conservatives an excuse to show up and vote down ballot. Saving the Senate and House of Representatives from the Democrats has to be a priority for conservatives, but many are so disgusted by 2016 that they will not even show up in November.

McMullin gives people a reason to show up. He gives conservatives someone they can vote for without holding their noses. He gives people someone to vote for instead of reconciling themselves to voting against someone. McMullin's candidacy is not the lesser of an evil, but an alternative against evil. For many, that will be enough.

A lot of people have been writing me, begging me to reconsider Donald Trump. They think this is the last best chance to get this nation right. They think we will turn a corner after which we cannot turn back. In truth, I have concluded we are already past the point of redemption when the best either party can do is offer up Clinton or Trump. We are beyond the point of looking to five black robed masters to save us from ourselves when we put up either a Clinton or a Trump. The seriousness and virtue of the voter is in the grave already and too many yearn for an idolized past that never existed in a future that is not theirs, but God's, to shape.

I am realistic that Evan McMullin has a limited change of winning. But I am idealistic enough to hope for better than Clinton or Trump.