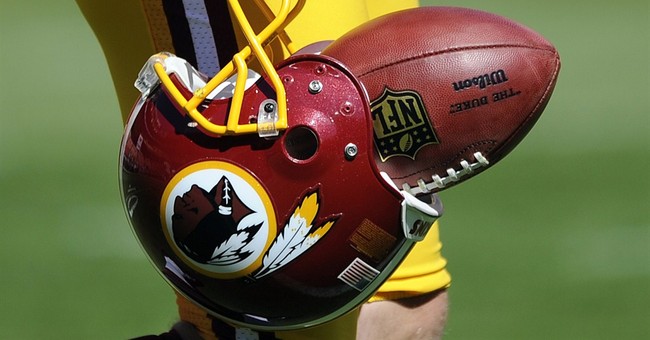 The United States Patent and Trademark Office invalidated several patents belonging to the Washington Redskins. This is not the first attempt by aggrieved parties to have the trademarks revoked.

A recent poll showed more than 70 percent of Redskins fans opposed changing the team name. More so, a majority of Americans have not found the team name to be offensive. Even more telling, there are numerous sports teams on Indian reservations around the United States that use the name Redskins. When the team name and logo were created, Native Americans participated.

But the patent office has ruled that, at creation decades ago, it was commonly understood that the word "redskins" was offensive. This conjuring of convenient facts decades after the fact is a favorite game of professional victims.

An honest person would concede that most Americans do not find the word redskins offensive and an honest person would concede that at its creation the trademarks for the Washington Redskins were not considered offensive. But these are different times. The United States now has a black president. The nation, as older generations pass and newer generations take power, is moving beyond race as an issue. Professional victims must now work even harder to find racist things to get worked up about.

The professional victims teach and preach a shallow diversity that is skin-color deep and intellectually homogenous. This is most easily seen on college campuses that have appropriate and acceptable ratios of gay, black, Hispanic, Asian, female and transgendered tenured professors who all view the world through the same lens with the same politics.

Take the same view of diversity and package it around wealth and ideas such as privilege. Suddenly a most pernicious creature is found. This creature is guilt ridden in skinny jeans and convinced the best way to remove the guilt of a privileged upbringing is to find those who do not sufficiently appreciate their own privilege and punish them. They typically have the power to do it, too.

These guilt-ridden children of privilege and their cousins -- the already rich, white liberal -- could care less to walk a day in someone else's shoes. They could care less to connect a world outside their bubble. They have decided they are the standard bearers of a secular moral code and will punish those who deviate. In their desire for diversity they dress the same, eat the same, read the same and tweet "Game of Thrones" spoilers. When the facts do not suit their demands, they conjure convenient new facts that may fly in the face of reality, but anyone who points that out is labeled a bigot, racist or conservative.

In another age, these people would be called busy bodies. At the end of the 20th century, they were called liberals. Prior to World War II, they were called progressive, but too many of them embraced Hitler's eugenics programs and Stalin's pogroms. They suddenly shifted to being called liberals and only now, having ruined that label at the end of the 20th century, are transitioning back to progressive.

In transitioning back to being progressives, they have worked diligently to create their own echo chambers in large cities and the media. They are convinced everyone agrees with them. Those who may disagree are censored. Because they feel compelled to offer a substitutionary sacrifice for their sins, they find substitutes and crucify them in the press and confiscate their property and trademarks for being offensive.

These people are now, regardless of party, the elite in Washington, D.C. The reality is, were the Redskins not from Washington, but from Cleveland or Atlanta or Tallahassee, its mascot and name would not be issues. Survival in President Barack Obama's America depends on individuals and businesses staying off the radar like a successful black market capitalist from Moscow circa 1980. The moment Washington's elite notice an individual or business that does not conform to the elite's moral code, the regulatory state must be set into motion.