Here’s Why Our President Will Win

Erich Reimer
|
Posted: Sep 04, 2018 12:01 AM
Share   Tweet
The opinions expressed by columnists are their own and do not necessarily represent the views of Townhall.com. 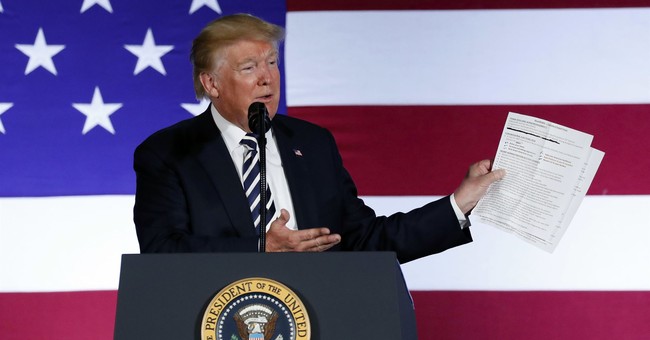 We’ve heard it all before.

As the old saying goes – “the more things change, the more they stay the same” – so it seems with the predictions for President Trump’s failure now.

You’d think that now after almost three and a half years of Donald Trump being in the public discourse as a serious candidate, and two as President, the critics would better understand why he defied all expectations and rose to his current place in our national tapestry.

Rasmussen Reports currently has President Trump’s approval rating at a remarkably steady 46% to 50% in these past few months, far higher than around this time last year. While his disapproval rating is also high, a reflection of our nation’s unfortunate polarization, the fact remains that almost half of Americans are still sticking by him despite the endless torrent of negative news stories that so many have become desensitized to.

After the legal pleas and convictions a few weeks ago concerning Michael Cohen and Paul Manafort, the President’s approval rating didn’t budge. All the incessant yelling about “Russia” despite a lack of clear evidence in an extraordinarily complex investigation has not moved the needle a bit, leaving some of the President’s critics just as surprised as they were as then-candidate Trump won primary after primary and then to his final showdown on November 8, 2016.

For those Americans who do not make their livings in the chattering class, the paradigm through which candidates, elected representatives, government officials, policies, and media debates are viewed is dramatically different. As we saw during the 2016 election, Americans care about real results and leadership. For many that meant voting for Hillary Clinton, and for around just as many that meant voting for Donald Trump.

The current issues affecting the President’s administration undoubtedly are important and worth watching, but given our representative republic system much of the actual policy action in D.C. is still based off of the wishes of the citizens that make up this large country of ours.

For these citizens and voters, many see a prosperous economy running on all cylinders. Even many of those Americans who disapprove of the President overall still give him credit for that. We have a strong military, a booming stock market, historically high business and consumer optimism, and so much more that satisfies both Americans of a conservative leaning and the many in the middle as well.

The chattering class operates to a different constituency and in fulfillment of different incentives that our policymakers. As I was talking with some people recently, though the executives at AT&T and Comcast may not be political or even may be favorable to President Trump themselves nonetheless they have CNN and MSNBC embrace anti-Trump fervor because it’s what sells to their customer niche and makes them their profits.

However, despite the media circus, as the Trump Administration moves forward ideas like impeachment and conviction remain improbable at best and delusional at worst, even if Democrats do retake the House or even also the Senate. The President simply has too much support and which has shown to be essentially ironclad, barring extraordinary circumstances.

For many, then-candidate and now-President Trump was and is the hero who finally spoke to the boiling turbulence and contradictions that had been plaguing our nation in recent times and particularly accelerating in the later years of the Obama Administration.

For many Americans, they have been very pleased by his Presidency’s results and the repeated proof that the doomsday predictions of the naysayers have again and again turned out – in President Trump’s distinctive vocalization – “wrong.”

As President Abraham Lincoln said in the Gettysburg Address, we live in a nation “of the people, by the people, for the people.” Currently, enough of the American people support our President with about as informed an understanding as possible. That is the President’s rock in this storm, and why the critics will likely keep on finding themselves disappointed and incorrect.