As A Former Democrat, The Schumer Shutdown Was About Firing Up The Democratic Base

Erich Reimer
|
Posted: Jan 25, 2018 12:01 AM
Share   Tweet
The opinions expressed by columnists are their own and do not necessarily represent the views of Townhall.com. 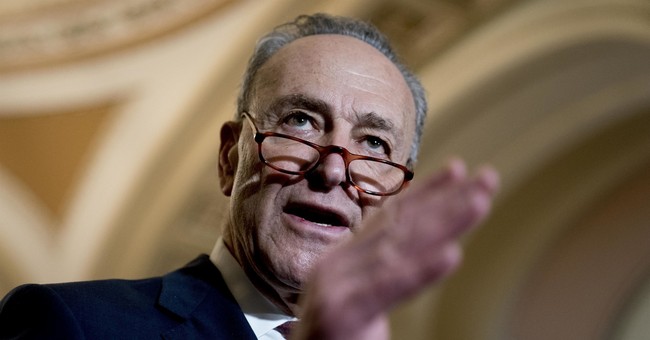 2018’s government shutdown ended almost as quickly as it happened. While the shutdown in 2013 lasted over two weeks this one lasted just barely one workday.

On the surface, it seems like Democrats were completely defeated. The original stop-gap measure proposed by House Republicans last week passed on Monday 81-18 in the Senate, 266-150 in the House, and was signed in the night by President Trump, officially ending the shutdown at least until February 8th.

The prior few days saw Democrat and Republican surrogates battling it out on the public airwaves in a fierce tug of war between “#TrumpShutdown” and “#SchumerShutdown.” Democrats drew a seemingly firm line in the sand over demanding a DACA bill immediately despite there still being weeks until its expiration and more than enough time for all parties to negotiate over such a complex and impactful policy measure.

As a result, Democrats shut down the government, risking the renewal of the CHIP children’s healthcare program, paying our troops, disrupting government services, putting Americans on the hook for billions in back pay, and tarnishing our image to the world as our rivals, like China, mocked us for this episode.

All Democrats seem to have got was a promise from Senate Majority Leader Mitch McConnell for a straight up-or-down DACA vote in the next month, barring any deal, that, is already looking like it may face questionable reciprocity in the House.

Before I became a Republican several years back I was deeply involved in national Democratic Party politics and in particular political strategy and messaging. While times have changed quite a bit, I still have a sense of the forces, rationales, and stakeholders within the Democrats.

The first hint is voters are overwhelmingly, even if inaccurately, blaming Trump and the GOP for the shutdown over the Democrats. According to a Politico poll Sunday, 48% blame the GOP compared to 35% for Democrats. Even Trump has said he believes he will be blamed “no matter what.”

The next hint is who did not vote for the stop-gap measure. In the Senate this included big-name luminaries such as Senator Elizabeth Warren (D-MA), Senator Cory Booker (D-NJ), Senator Kirsten Gillibrand (D-NY), and Senator Kamala Harris (D-CA). These are all rising stars in the Democratic Party and potential 2020 or 2024 prospects.

A closer read of polling shows that even though the overwhelming majority of Americans disapproved of the shutdown, 81% by some measures, the Democratic Party base was largely bolstered by it. It was essentially an ironic exact inverse of 2013.

Despite Democrats likely actually having hoped for the remote possibility that their shutdown brinkmanship would result in immediate DACA passage, nonetheless the shutdown still served the important purpose of securing and energizing their base in preparation for 2018, 2020, and beyond.

The shutdown was clearly painted by Democrats as the fault of Trump and the GOP, further harnessing the anti-Trump sentiment that has been major fuel for helping them boost turnout, as we saw in Alabama and Virginia in recent months.

The confrontational tactics also have gotten many center-left or regular liberal Democrats back in good graces with a progressive base that is growing increasingly agitated with them, even though for some the brinksmanship was even not enough.

The shutdown also brought significant general public attention to DACA at a time when the Democrats see that as a particular weak point for Republicans in upcoming years, given both large public support for a positive DACA resolution and the increasing growth of Hispanic-Americans in the United States.

All these factors were likely what caused Senator Chuck Schumer (D-NY) to switch from blasting Republicans in 2013 over the shutdown, saying “[n]o matter how strongly one feels about an issue, you shouldn’t hold millions of people hostage,” to in grand irony being the one who began the shutdown this time.

It seems Democrats may be hoping for the lucky break similar to the one Senate Republicans had back during the last shutdown. Despite massive public disapproval of the shutdown in 2013, the GOP ended up winning back the Senate in 2014 amid an excited GOP base.

For Democrats the way they painted the shutdown was not just tactical politics but also a long-term investment in the new direction they are trying to push the Democratic Party. After all, this was the party where just a few years ago we had then-Senators Hillary Clinton, Barack Obama, and Harry Reid all publicly demanding and voting for firm measures to control and scale back illegal immigration.

Congressional Republicans did an excellent job this past week of showing how responsible governance in a more ideal and less politically polarized world would be done. In a loftier political environment, the public would also not believe in or reward brinksmanship and brazen political tactics like those that the Democrats did.

For now it seems this government shutdown may only be a harbinger of what looks like continued policy polarization and a tumultuous 2018 and 2020 election season.

Did You Catch What Biden Said About Our 'New Normal'?
Townhall
'Honey, do you even HISTORY?' Joy Reid SCHOOLED for pushing revisionist history claiming the parties MAGICALLY switched places
Twitchy
Biden's Slip of the Tongue About Kamala Harris at Bill Signing
Redstate
The Democrats' 'Joosie Smoolyay' Problem
PJ Media