Erich Prince
|
Posted: Jun 07, 2021 11:42 AM
Share   Tweet
The opinions expressed by columnists are their own and do not necessarily represent the views of Townhall.com. 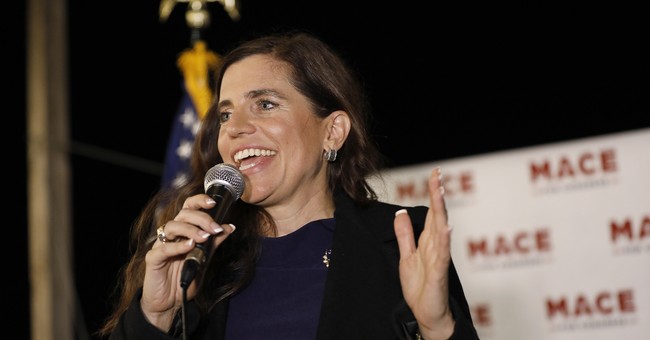 During the early morning hours of May 31st, Memorial Day, the home of freshman Congresswoman Nancy Mace was vandalized. In a video statement released the following day on Twitter, Mace surveyed the damage and explained, “...what makes me so angry is that this is a house that I live in with my kids, my two kids...My kids aren’t even safe on the front porch of their own home...We can disagree politically, but vandalizing somebody else’s property is wrong and illegal.” Spray-painted on the front steps of Mace’s home were the words, “no gods/no masters/all politicians are bastards,” accompanied by an insignia commonly used by Antifa. And on the street in front of Mace’s home were the words in black “F— you nancy.”

This was just the latest in a series of incidents targeting Mace. During the summer of 2020, shortly after she received the Republican nomination to challenge Democratic incumbent Joe Cunningham in South Carolina’s 1st congressional district, law enforcement investigated a man who flew “cross country” to seek out Mace’s home in a menacing manner. Then, in October, Mace’s car was targeted by a vandal. Also in South Carolina, just two weeks prior to the car vandalism episode, the front window of the Lancaster County Republican Party headquarters was pierced by gunfire.

Although political history—both in the United States and elsewhere—has been marked by periodic upticks in violence and incidents where acrimonious debate have descended into physical displays of aggression and even violence, a functioning society must make clear, in no uncertain terms, that this cannot be tolerated.

A few other concerning events along these lines come to mind and include the October 2016 graffitiing of Senator Pat Toomey’s Pennsylvania home, the firebombing of a Republican campaign headquarters in Orange County, North Carolina, earlier that same month, and, just last month, Rand Paul received via mail a package containing white powder, accompanied by a photoshopped image of the Senator following his 2017 assault by a neighbor with the words, “I’ll finish what your neighbor started you motherf—er.”

This spate of intimidations coincides with an emergent trend that has gained momentum in recent years: that of protesting at the homes of politicians and other targets. It has ensnared Republicans and Democrats alike; federal office-holders and local ones; billionaires and ordinary citizens. Mitch McConnell has been targeted. So have Josh Hawley, Kentucky Attorney General Daniel Cameron, Tucker Carlson, and countless others. And Democrats have faced it too, including Nancy Pelosi and Steny Hoyer. Even Jeff Bezos has not been spared. In a particularly gruesome incident, protesters set up a mock guillotine outside of Bezos’ Washington D.C. home in August of last year.

Politics, as Thomas Koenig writes, “is the alternative to violence.” That is what politics is: determining which direction a society takes through persuasion rather than through brute force or intimidation. American society in the past two or three years has witnessed a surge in violence, in the form of rising homicide numbers and political demonstrations that devolved into outright violence. Certain voices, all the while, seek to sidestep the severity of these incidents, call into question their validity, or, most troublingly of all, claim they are justified. And that, unfortunately, is what happened with those who not only trivialized the vandalism of Mace’s home but actively celebrated it.

In his uniquely gracious concession speech after falling short in the presidential election of 2008, John McCain described how "campaigns are often harder on a candidate's family than on the candidate." Politicians know when they enter the public sphere that they will be the target of barbs and character assassinations. Their families, as McCain alludes to, can unfortunately also become entangled.

As hurtful as this might be, McCain was referring to words. These acts of intimidation, however, seek to erase the distinction between the public and private sphere, while also escalating things from mere utterances to physical displays of aggression. As such, these tactics must be strongly condemned. (Certain states are already acting to tighten or introduce new laws in response.)

In recent days, a number of political figures have denounced the intimidation of Mace, from the Democratic Mayor of Charleston, South Carolina, to Tim Scott and Nikki Haley. However, the national press has been all too quiet.

It may be the platitude of all platitudes to say that healthy societies seek consistently to minimize violence (and threats of it). But that does not make it any less true. Media coverage choices, in turn, should reflect that priority. What has happened to Mace—and countless other politicians and citizens—must be brought to the fore.

Erich J. Prince is Co-Founder and Editor of Merion West.