Cancel School: Why Self-Learning Must Be the Future of Education

Eric Cervone
|
Posted: Nov 01, 2019 10:13 AM
Share   Tweet
The opinions expressed by columnists are their own and do not necessarily represent the views of Townhall.com. 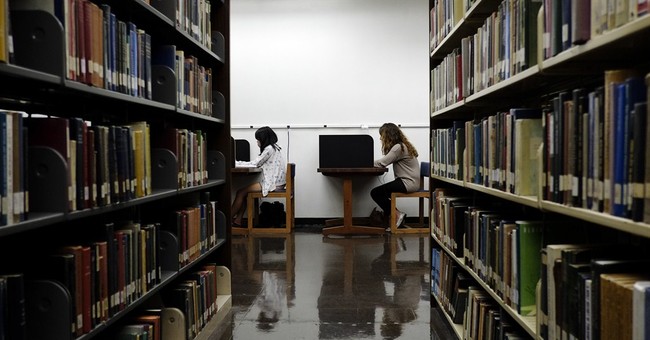 American education is at a crossroads. Over the past decade, standardized testing has taken over our schools. In America’s largest public schools, the average student takes some 112 mandatory standardized tests between pre-kindergarten and the end of 12th grade. Yet two-thirds of American students are still performing below their grade level on standardized reading and math exams.

There is little support for the idea that such testing is even desirable: a majority of Americans believe there is already too much emphasis on standardized tests, and the failures of No Child Left Behind—which ushered in the most recent era of standardized testing—have been acknowledged across the political spectrum.

Our current education model simply is not suited to benefit students, particularly in the modern economy. Our schools are run with factory-style conditions, appealing only to the most conformist of students. Schools may tweak and modify their programs, but these changes do nothing to address the fundamental failures of a system based on student acquiescence.

Rather than foster the creativity that drives happiness and satisfaction and moves our world forward, schools kill creativity. And with automation increasingly taking over manual tasks, it is the creative economy that will have to drive human employment through the 21st century. While school districts spend their time debating potential reforms and arguing over the allocation of funds, it’s increasingly evident that the systems in place no longer serve the purposes for which they were created. In a dynamic world, young people need a dynamic learning environment. Instead of training our students to be compliant robots, humanity must harness the trait that separates us from the machines we are building: creativity.

For years, American students were told to simply follow the path—it was assumed that the road to success ran through a college degree, regardless of the type of degree or its cost. Students took on thousands of dollars in debt to earn their degrees, yet many struggle for years to find decent-paying jobs. Young Americans are increasingly depressed, anxious, and stressed. Something about our system is not working.

It’s no surprise that some of the most creative members of our society were misfits in school. Oscar-winning actress Jennifer Lawrence was put on anxiety medication as a child because she felt so miserable in school. But once Lawrence found her creative outlet, her parents realized she no longer needed the medication. Countless entrepreneurs—including Bill Gates, Mark Zuckerberg, Steve Jobs, and Richard Branson—dropped out of school when they realized their formal education was hindering their growth. Albert Einstein, who was himself a rebellious student, once wrote, “It is, in fact, nothing short of a miracle that the modern methods of instruction have not yet entirely strangled the holy curiosity of inquiry.” Many of these individuals, when asked to describe themselves, use the same word: self-taught.

The future will need more people with the skillsets of creative thinkers. People who can adapt to the changing world, who will know how to forge their own path. People who know how to teach themselves.

This happens to be a deeply personal issue for me—as a child, I loved learning but struggled in school. My long-suffering parents collected a tower of notes sent home from my teachers. My classroom behavior was labeled “immature.” I was deemed unfocused. On my sixth-grade social studies report card, my teacher was tasked with assessing my “reaction to authority.” She had three options: accepts, varies, or resists. She circled all three and wrote “depends” (apparently, “varies” was too concrete a description of my behavior.) In high school, I found myself in detention multiple times a week.

My bedroom was surrounded with books I had read, yet I was barely pulling Cs in some of my classes. I sought out knowledge as subjects piqued my interest, and I was lucky that my parents let me feed my unique curiosities. After 9/11, I was frustrated that my middle-school teachers barely talked to us about the events that were unfolding around the world. I thus sought out my own resources to understand. Similarly, I was in the middle of an economics degree during the 2008 financial crisis. When none of my professors would deviate from their planned curriculum to cover the crisis, I turned to online resources to help me make sense of the latest developments.

For years, I thought that my failures in school meant I was lazy. It was only recently, after reading the work of people like John Taylor Gatto and William Deresiewicz, that I realized I simply learned better when learning on my own. More than anything I learned in school, it was this ability to seek out knowledge and learn for myself that I use to solve the problems I face today.

Self-learning has never been easier than it is today. I’m exceedingly jealous that a recent article titled “What To Do if School Bores You Out of Your Mind,” which outlines how students can self-learn a classical education, wasn’t written when I was in high school. I can’t even begin to list the various educational outlets available online that are a fraction of the price of college tuition. People everywhere now have access to the brightest minds in the world. We must embrace this revolution in our ability to educate ourselves.

Conservatives often show antipathy towards the creative class—and the feeling can certainly be mutual. But on the issue of education, the message should be a universally American one: people, especially young people, need to be encouraged to pursue their happiness and discover where they fit into society. It is nearly impossible for this process to take place within the current school system. Only by empowering students to self-learn will we be able to unshackle the creativity necessary to solve the problems of the 21st century.