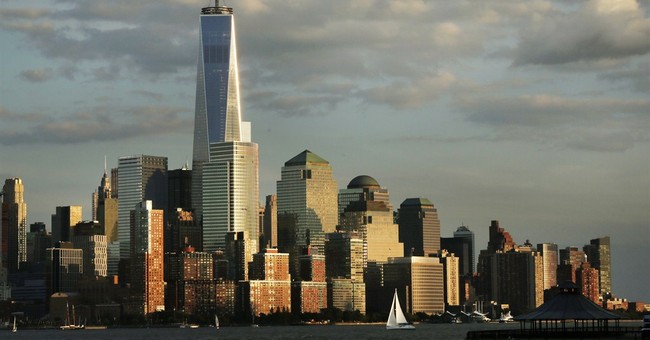 Trending
WASHINGTON -- Two news stories, both from New York City, suggest that 2015 may be a grim year, but the grimness might be tinged with whimsy -- at least in the second case.

First the grimness, and I write as an American with two proud police officers prominent in my family tree, my great-grandfather and my great-great-grandfather. The first was Frank Tyrrell, for many years the sole survivor of Chicago's Haymarket Riot. As a youngster, wearing short pants and a neatly pressed suit coat, I went along with the burly members of the Chicago Police Department to place a wreath on the Haymarket memorial. Incidentally, the Chicago police had to move the memorial indoors after the radical SDS in the early 1970s bombed it a second time. Did our president's accomplice, Bill Ayers, have a hand in the bombing? We shall wait for the full Obama memoir.

Then, of course, there is my second heroic ancestor, P.D. Tyrrell, an immigrant from Ireland who, as a Secret Service officer, broke the plot to steal Abraham Lincoln's body in 1876 and sent the lousy would-be body snatchers to the calaboose. The Tyrrells arrived late in this great country, but, growing up, we all knew where we stood on the Civil War.

Moreover, we know where we stand on ambushing police officers as they wait in their patrol cars to serve the public. What is more, we know where we stand on inciting the public to violence against the police. I, frankly, oppose capital punishment, but for this grisly act that was perpetrated on Saturday against officers Wenjian Liu and Rafael Ramos I would reinstate it. The Rev. Al Charlatan has been inciting mobs for many years, from Tawana Brawley to the present violence over the weekend in New York. I think it is time that President Barack Obama remove his name from the White House guest list and check to see that Ayers' name is off the list, too. It is curious that a president who claims to be such a moral paragon has so many unsavory people in his entourage.

The second story from New York is more confirmation for me that the sexual revolution is over -- good news and whimsy. Some weeks ago, I noted that, in one day, the early casualties of the Sexual Revolution were on display on the front page of the Washington Post along with the evidence that the Revolution had finally ended. It took some 55 years, but the age that began with Playboy ended with mobs of angry women.

The early casualties were Bill Cosby's alleged victims from the late 1960s and beyond, including even Cosby, or at least his reputation for probity. The evidence the Sexual Revolution's expiry was the other front-page story, the story of the so-called gang rape at the University of Virginia. Today, authorities are still looking for the alleged rapists, but there is little doubt that a damper has been placed on libidinous Nirvana on college campuses and on the public as a whole. Sex has become downright treacherous -- even dangerous. The Sexual Revolution is over!

Now from New York comes still more evidence of its extinction. In another front-page story, this time in the New York Times, there is a news report of the city's crackdown on "manspreading" in the subway. What is manspreading you might ask? It is when a man spreads his legs; often, the Times tells us, by as much as "two feet" and takes up an empty seat to his left or his right, occasionally both seats. Manspreading, the Times assures us, is a very conscious and even exhibitionistic act, though the newspaper's case was not strengthened when the only picture it could produce showed a perpetrator fast asleep.

At any rate the ladies are irked by men who take up too much space, but they are apparently really incensed by the men's shameless display of their -- I guess we might say -- virility. Now you might suspect these ladies of having sex on their minds, but I have come to another conclusion. The ladies and their co-conspirator, the New York Times, are telling us, again, that the Sexual Revolution is over. Something like a new Victorian sensibility is coming down on us, and I suggest you had better be ready. According to the Times, these Victorian gals even have the Metropolitan Transportation Authority on their side.