From Pete Rozelle to Roger Goodell 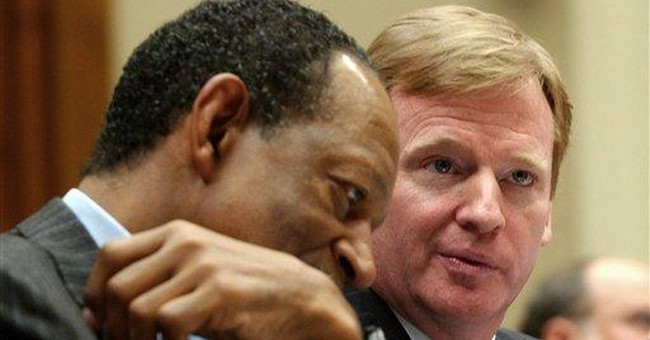 Trending
WASHINGTON -- Being a sports impresario -- in this case an NFL commissioner -- has never been easy. I know such magnificoes oversee the most prosperous sport in the country. They just put the logo of the NFL on a product line and watch the money flow in. Do they have a line of formal wear or of gardening equipment? It is only a matter of time, and sports fans will be drawn to them with wallets open. Does the NFL have a line of women's lingerie? Apparently, Mr. Roger Goodell, the present commissioner of the NFL, is contemplating it. Why else would he be so apprehensive about a handful of women critics out there squalling in the audience along with his millions of admirers, both men and women, both wearers of lingerie and opponents.

Goodell has just appointed four women to some sort of policy positions in the NFL to appease this angry minority. As I say, being a sports impresario has never been as easy as it looks.

I was first made aware of this back in the early 1970s when I appeared on a national television show with Pete Rozelle, the Roger Goodell of his day, and Aileen Hernandez, then leader of the National Organization for Women, she having made her way through the jungle of left-wing union organizations. Possibly you have wondered where these angry women came from. You thought they were feminist theorists thinking weird thoughts in their studies or suburban housewives manque. Well, Aileen was originally a union rabble-rouser until she found a more lucrative hustle. As for me, I was onstage in my lifelong capacity as a political commentator. Of course, Rozelle was the center of attention until Aileen, a rather elephantine woman, piped up and announced that as the feminist revolution gathered steam, and little girls began competing in sports such as wrestling and football, they would resist "institutional sexism" and grow as big and strong and mean as any NFL linebacker. Soon they would be competing for slots in the NFL. Rozelle was rendered speechless. I stepped in with a joke, and he was off the hook. As I say, being a commissioner for the NFL is never easy.

Now Goodell has several NFL athletes charged with child abuse and spousal abuse or at least girlfriend abuse, along with a controversy about head injuries. As for Goodell personally, he is charged with lying to the public, mishandling these controversies, and treating at least one of the athletes to double jeopardy. Naturally, the modern-day Aileen Hernandezes in his audience are calling for his job. So far as I can ascertain, he has only the majority of the American people behind him, along with Rush Limbaugh, Mark Levin and Sean Hannity. That is not much when you have our cultural elites -- feminists, the media and members of Congress -- clamoring for your job and clamoring for still worse for these loutish athletes.

What is more, facts are facts, not the loveliest of our fellow countrymen become professional athletes, franchise owners, or what are called "other league-affiliated persons" -- and do not fail to include the loud-mouthed commentators. A friend of mine who teaches a class in criminal law regularly retrieves criminal justice news for her class from the sports pages, especially in autumn.

What is an intelligent observer to make of all this? Rush and his colleagues obviously believe that this is another example of American elites falling on a popular American pastime. If the NFL were back in its sandlot infancy these noisy women would be picking on something else, possibly the popularity of the Congressional Medal of Honor, possibly Mother's Day, or do they already abominate Mother's Day? At any rate, Rush and his friends have a point. Yet, the wrongs alleged in these instances are quite horrible. They are not unique to the NFL. Still, they are quite horrible, an example of the increased coarsening of our society. Forty years ago such criminal behavior from a professional athlete was rare. Now it is not.

I think for now we can say that each instance of alleged criminal behavior should be treated by the criminal justice system. A criminal judgment should bar an athlete from the NFL. As for additional action against misdemeanants, that is Goodell's call, but I am for his taking prudent action. Let us clean up the NFL and be rid of these noisy critics.