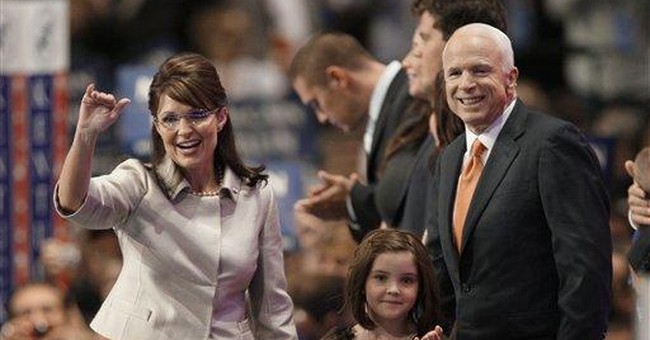 WASHINGTON -- What would the mainstream media's response be if former Alaska Gov. Sarah Palin described China's economic growth to an audience of students in Shanghai as "an accomplishment unparalleled in human history"? That is what the most inexperienced president in modern American history said in Shanghai this week. I wonder whether any of the assembled journalists choked. President Barack Obama makes such unhinged pronouncements with the kind of frequency that if he were anyone else, he would be set down by the media as a booby. I take that back. Vice President Joe Biden is equally gaffable, yet no one in the mainstream press makes him out to be a booby. When he was tapped to be then-Sen. Obama's running mate, he was acknowledged widely -- from ABC to NBC and with all the like-minded newspapers in between -- as a foreign policy colossus.

Both of these men, when untethered from their teleprompters, are prone to gibberish. Actually, I suspect that the president's Shanghai preposterosity appeared in the text rolling down his teleprompter. His speechwriters are as prone to the absurd as their boss. Nonetheless, President Obama is reputed in the media to be an orator of great gifts, and anyway, he is very charismatic. So apparently, the journalists are insensate as the gaffes, the howlers, the jaw-dropping exaggerations roll forth.

Sarah Palin is accorded no such dispensation. During the 2008 presidential campaign, in answering a foreign policy query by Katie Couric about Russia's proximity to the state of which Palin then served as governor, she was mocked for saying Russia is so close it can be seen from Alaska. Her explanation to Couric, whose face was contorted in disbelief, contained the perfectly sensible observation that Alaska and Russia share "a very narrow maritime border." That, and nothing further that the governor said was laughable. Still, the media laughed. The media did not laugh when Couric, at about the same time in the campaign, listened attentively to Biden claim President Franklin Roosevelt talked to a nonexistent television audience during the 1929 stock market crash, four years before Roosevelt was president and even more years before there was a television audience. Couric's respective countenance betrayed no evidence that she recognized that Herbert Hoover was actually then president or that a television audience was years from reality. Couric, too, is a booby.

There is something odd about the media's present absorption with the pulchritudinous Ms. Palin and her book tour. The media are exalting her even as they are disdaining her. The weird phenomenon puts me in mind of the way the media treated scandalous tales of President Bill Clinton's sex life. They covered the scandals in excruciating detail even as they sniffed that a politician's sex life (sex extravaganza) is beneath professional journalism's proper interest. Oh, and one other thing: The journalists who unearthed these stories, stories that would appear over and again in Clinton's White House, were unworthy of being dignified with the designation "journalist."

Actually, as Palin began her book tour through rural America, it was the journalists who made the rural tour a stroke of public relations genius. It was up to the journalists to cover it or not, and though Palin is a candidate for absolutely nothing and is, in fact, a retired politician, the journalists followed her with their usual mixture of intense interest and contempt. They may not turn her into a presidential candidate, but they certainly have turned her into a celebrity. What we have here is still more evidence that the American journalists' proclaimed standards are not standards at all. American journalism is a chaos of subjectivity.

Put the politician who sees China's economic development as "an accomplishment unparalleled in human history" next to the politician who notes that her state borders Russia (and Canada, too), thus giving its governor occasion for at least some foreign policy knowledge. The first is boomed as very charismatic, but so is the second. The first orates successfully to large crowds, but so does the second. The first is telegenic, charming and a pioneer -- the first mixed-race politician to be president. The second is telegenic, charming and a pioneer -- the first Republican woman to be nominated for vice president. Is there a difference in their qualifications? Well, yes, the pulchritudinous Ms. Palin in 2008 had more executive experience than Mr. Obama, having been both a small-town mayor and a governor. In fact, as President Obama comes up on his first year in office, former Gov. Palin still has more executive experience. Why is no one laughing?