Ed Feulner
|
Posted: Mar 08, 2017 12:01 AM
Share   Tweet
The opinions expressed by columnists are their own and do not necessarily represent the views of Townhall.com. 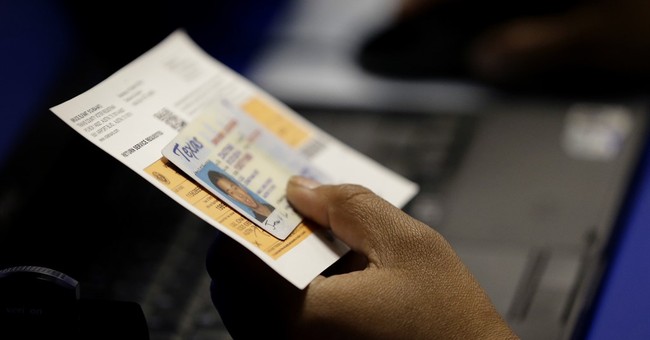 Tell that to William Gardner. New Hampshire’s Secretary of State is a Democrat who wants to rid the Granite State of what he calls “drive-by voting” -- a type of fraud in which people from out of state come for a short period to vote on Election Day.

How is that possible? Because New Hampshire has same-day registration and no period of residency required for a person to register and vote. The potential for fraud is obvious.

So why haven’t things changed in New Hampshire?

They’ve tried. The state legislature has passed a residency requirement more than once, only to have it shot down by liberal lawmakers and then-Gov. Maggie Hassan.

They’re not alone, unfortunately. Efforts to enact even the simplest reforms of voter laws -- not only in New Hampshire, but elsewhere nationwide -- are met with bitter opposition from liberals. Every proposal is greeted with hysterical and baseless accusations of racism and disenfranchisement.

Indeed, Young notes, liberals try to compound the problem. They “open the door to more fraud by championing changes to the process like mandatory voter registration, all mail-in voting, same-day registration, no-excuse absentee voting, and not requiring proof of citizenship for voter registration.” You almost expect every box of cereal to carry a voter-registration form these days.

Some of the latest examples of voter fraud include:

· In Texas, Rosa Maria Ortega, a non-citizen, was found guilty of two counts of voting in the 2012 general election and the 2014 Republican primary. Ortega claimed she thought she was a citizen, but she had previously noted on a driver’s license application that she was a non-citizen.

· In Virginia, Vafalay Massaquoi pleaded guilty to one count of falsifying voter registration applications and two counts of forging a public record. While working for New Virginia Majority, a liberal advocacy group, Massaquoi filed voter applications for fictitious Alexandria residents. An Alexandria official noticed the voter applications were all filled out in the same handwriting and turned the documents over to the authorities.

· In Colorado, Maureen Marie Moss, a worker for a community organization called Black Diamond Outreach, forged 34 signatures on petitions to get U.S. Senate candidate Jon Keyser on the ballot for the June 2016 primary.

One easy way to curb election-related fraud is through voter ID. How could anyone oppose the practice of showing a photo identification to ensure that you’re you? To guarantee that no one else votes in your name?

Yet some critics describe voter ID as the new literacy test. They act as if getting an ID is extraordinarily difficult and intended only to suppress the vote. Never mind that everyone must show a photo ID for dozens of other activities, from buying alcohol and applying for welfare to renting a car and boarding an airplane. It’s hardly an insurmountable hurdle.

Voter ID is overwhelmingly supported by the public, Joanne Young says. A 2016 Gallup poll last August found that 80 percent of Americans, including 63 percent of Democrats, support the requirement that a person show a photo ID at the polls before voting.

The stakes are high. As President Trump’s press secretary Sean Spicer said, “This isn’t just about the 2016 election. This is about the integrity of our voting system.” We owe it to our fellow citizens to get this right.