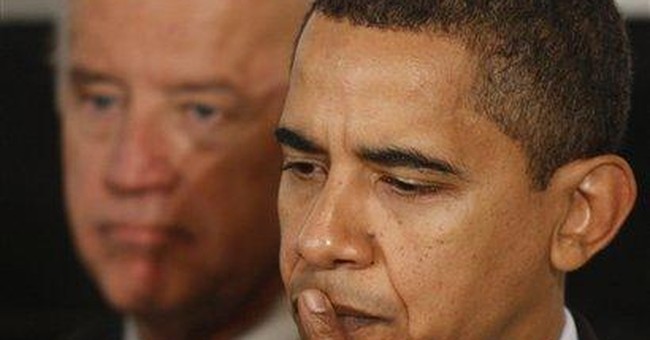 “Today does not mark the end of our economic troubles,” President Barack Obama announced as he signed the so-called stimulus bill. “But it does mark the beginning of the end.”

It’s not clear whether he was intentionally paraphrasing Winston Churchill’s famous 1942 speech that included the phrase “the end of the beginning.” But the passage of this law certainly marked the end of at least one thing: Obama’s promise to bring transparency to the legislative process.

As a candidate, Obama vowed that “when there’s a bill that ends up on my desk as president, you, the public, will have five days to look online and find out what’s in it before I sign it, so that you know what your government’s doing.”

Well, there were three days between this “emergency” legislation passing Congress and Obama signing it at a political-style rally in Denver. But that doesn’t tell the tale of how swiftly the measure was passed.

Lawmakers had only a few hours between when the final bill was presented and when it was voted on -- late on a Friday night, of course. The bill came in at more than 1,000 pages, and lawmakers should have taken Obama’s suggested five days (at least) to review it. That would also have allowed journalists and bloggers to identify problems with the bill. Once the passed bill is sitting on the president’s desk, there’s nothing he can do to improve it.

Meanwhile, Obama clearly violated the spirit of his promise of openness. The original House measure, for example, contained no money for high-speed rail lines. The measure the Senate passed a few days later contained $2 billion for such projects.

By the time the final bill passed, it contained $8 billion for high-speed rail. That’s some compromise. Did most lawmakers even realize the extra $6 billion was there? Probably not. As Sen. Frank Lautenberg, D-N.J., told CNSNews.com. “I don’t think anyone will have the chance to [read the entire bill].”

Meanwhile, a few days before the bill passed, Obama held a news conference to announce, “It also contains an unprecedented level of transparency and accountability so that every American will be able to go online and see where and how we’re spending every dime.” Not only did Americans not know what we were getting, lawmakers didn’t know what they were giving us.

“What [the bill] does not contain,” Obama added, “is a single pet project, not a single earmark.” The rail example alone casts doubt on that claim, but there were others. Columnist Michelle Malkin identified a number of pet projects, including $2 billion for a power plant in Illinois, $300 million for low-emission golf carts for federal employees, and $65 million for digital TV coupons.

The irony is that, during his brief Senate career, Obama was a powerful voice for open government. “We can all agree that government ought to spend money efficiently. If government money can’t withstand public scrutiny, then it shouldn’t be spent,” he said, sensibly, in 2006 while pushing for the Federal Funding Accountability and Transparency Act.

That law, proposed by Obama and Sen. Tom Coburn, R-Okla., demanded the creation of a Google-style search engine to allow anyone to track more than $1 trillion in federal contracts, grants and earmarks. It was an important step toward open government.

But such steps are easily derailed when lawmakers race to meet false deadlines and do their work behind closed doors. The sad fact is that a bill to spend $787 billion flew through Congress in just days with virtually no public input and no real “adult supervision” from the White House.

“Sin in haste, repent at leisure,” the saying goes. Well, our government just acted in haste. And American taxpayers will be repenting that action for years to come.