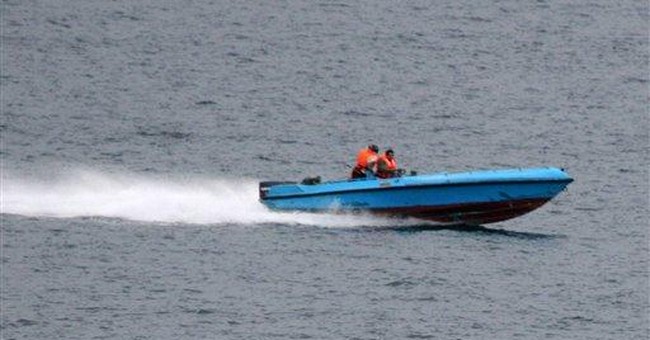 Even the strongest military powers are often paralyzed by an age-old weakness: They tend to focus on past threats rather than on future ones.

For example, on Sept. 11, 2001, NORAD was conducting military exercises aimed at protecting North America’s skies from Russian bombers. Meanwhile, a handful of terrorists were turning commercial jets into a different type of bomb.

No, our military can’t always see where the next threat is coming from. But by aggressively tracking any potential threats, we can minimize surprises. And being wary has other advantages. If a competitor knows we’re watching closely, it will conclude that any attack is likely to fail, and seek to advance its interests through peaceful means.

Which brings us to China.

There’s no logical reason for China to become a military threat to America. The Asian giant is growing its economy by leaps and bounds through trade with the U.S., and that ought to continue for decades to come.

However, Beijing’s communist leaders may have other ideas. Last year China flexed some military muscle by destroying one of its own weather satellites. The message: Our eyes in the sky could be neutralized. Since our military relies on satellites for 90 percent of its critical intelligence, telecommunications and surveillance, that’s unnerving, to say the least.

Then there’s our pledge to defend democratic Taiwan. It already faces at least 1,300 ballistic and long-range cruise missiles pointed at it from the Chinese mainland.

Chinese subs are difficult to track and can now operate throughout the Western Pacific Ocean. All new Chinese subs have become impossible to locate without active sonar.

Obviously, our navy needs to test the latest sonar technology in the Pacific. But legal maneuvers are thwarting military ones.

Yet the chief of naval operations says that area is critical to national defense. “The southern California operating area provides unique training opportunities that are vital to preparing our forces, and the planned exercises cannot be postponed without impacting national security,” Adm. Gary Roughead announced last month.

To allow the tests to proceed, President Bush granted the Navy an exemption. Obeying the judge’s orders would “undermine the Navy’s ability to conduct realistic training exercises that are necessary to ensure the combat effectiveness of carrier and expeditionary strike groups,” Bush said.

Now Judge Cooper has struck back. She’s overruled the administration and reinstated her ban, a decision immediately cheered by environmentalists. And another U.S. magistrate has extended the ban. Elizabeth Laporte has ruled the Navy must establish sonar-free zones in several places, including seas near Monterey Bay, the Galapagos Islands, Ecuador, Australia, the Mediterranean and Hawaii. Think our military competitors will obey such restrictions?

On matters of defense, our country should defer to the military, not to judges. Our Navy says it needs to test its sonar in the Pacific, since it would be those systems -- not some legal declarations -- that would protect us if we were attacked.

“Attack [your enemy] where he is unprepared,” Sun Tzu writes in The Art of War. “Appear where you are not expected.” The Sept. 11 terrorists certainly did that. Will we, in the interest of coddling a few whales, leave ourselves vulnerable again?