D.W. Wilber
|
Posted: Jul 11, 2017 12:01 AM
Share   Tweet
The opinions expressed by columnists are their own and do not necessarily represent the views of Townhall.com. 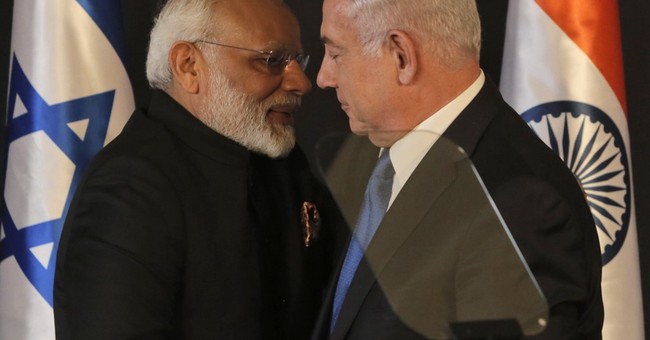 Nope.  I’m not talking about that intractable situation in the Middle East between Israel and the Palestinians that has bedeviled the administrations of every American president for many decades now.  Certainly it’s an issue that needs a solution, with the “two state” solution one of a number that have been offered up over the years.  But we’ll leave that topic for another time.

What I’m talking about is much closer to home, the states of California and Illinois.  Both are in desperate financial crisis as a result of Democrat-controlled legislatures that over the years have created a financial mess for both states.  Democrat controlled legislatures who haven’t got a clue about how to fix the problems they created other than by upping the taxes on their citizens.  Which anyone with any sense knows that alone raising taxes won’t fix the problems, and will only provide a short-term solution.  Massive spending cuts are also needed to get each state’s fiscal house under control.

It’s been suggested by others that perhaps it’s time for the citizens of both states, particularly conservative Republicans to consider other options than simply forking over more of their hard-earned money to state governments that don’t know how to do anything but waste it.  And just maybe it’s time to consider splitting each state into two separate states.  The State of California and the Socialist State of California, and Illinois and the Socialist State of Chicago.  A ‘two state’ solution.

Realistically were it not for a narrow strip running from San Francisco down to Los Angeles the state of California very possibly would be a ‘Red State’, staunchly in the Republican column in most elections.  As would Illinois, where much of the state south of Chicago would vote Republican.  But as with the high population density along that coastal strip in California, and unfortunately the city of Chicago with its nearly three million voters, both effectively counter any outstate or downstate Republican strength.

Think about it, we have a North Dakota and a South Dakota, as well as a Virginia and a West ‘By God’ Virginia.  Why not two California’s and an Illinois separate from the city of Chicago ?  Two more stars would also likely be easier to incorporate into our existing national banner, the Stars and Stripes.

Actually the answer to the question of “why not” is very simple.  If one were to break both states into separate entities, within a very brief matter of time both of the Democrat-controlled states would become something akin to what has been historically referred to as “Banana Republics”, due to the corruption and fiscal irresponsibility associated with those types of failed nation-states.  And just as likely both of the Socialist states of California and Illinois would end up extending their outstretched arms, palm up, towards the federal government to help bail them out of the financial messes they both created.  Something they may end up doing anyway in the not too distant future.

In fairness to Illinois the Republican Governor Bruce Rauner seems to be intent on trying to fix the fiscal mess created by the Democrat legislature, even calling for term limits as a way of ridding the state of the corruption and the ‘good ole boy’ network presided over by the Democrat leader of the House, Mike Madigan.

Madigan is actually a ‘poster child’ for terms limits.  He is the longest-serving office holder in Illinois history, and the recent demise of the state’s financial situation rests squarely on his and his party’s shoulders.  Illinois clearly does resemble a ‘Banana Republic’ as a result of their fiscal and political shenanigans since Madigan’s been presiding over the state house.  In fairness though presiding with the recent help of some so-called Republicans who voted with Madigan on a tax increase and against their own Republican Governor.

Governor Rauner is simply trying to bring some sanity to the madness that is Illinois politics, but it would seem that some Republicans can’t be counted on to do what’s right over political expediency.  A lesson that President Donald Trump is also learning in Washington, D.C., where there certainly are some additional poster children for term limits as well.

And what of California ?  Not much beyond “Governor Moonbeam” needs to be said to explain why a state with such immense natural resources, industry, and tourism opportunities is also teetering on the brink of a financial collapse.  California Governor Jerry Brown has embarked upon a path to self-destruction with all of his extreme liberal policies, that the state’s headlong dash towards total economic and social collapse can’t be very far away.

So indeed the answer for both California and Illinois may be a ‘two state’ solution.  Let the parts of the states with a conservative Republican base thrive and prosper, while the Democrat-controlled parts of the state reach their eventual terminus with the complete financial and societal devastation they both seem determined to achieve.