If Trump Supporters Are A “Basket of Deplorables”, Then Hillary’s A ‘Basket Case’

D.W. Wilber
|
Posted: Sep 11, 2016 12:00 AM
Share   Tweet
The opinions expressed by columnists are their own and do not necessarily represent the views of Townhall.com. 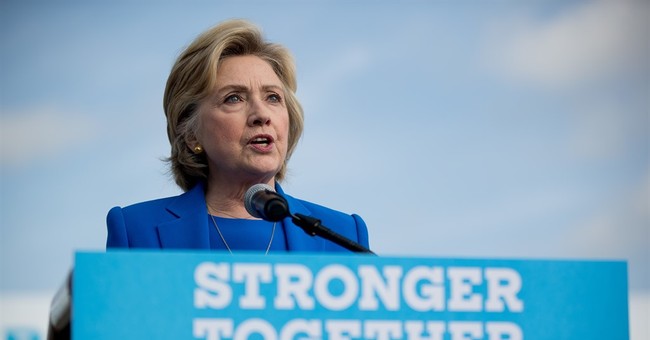 During a private fundraiser hosted by Hollywood celebrity Barbara Streisand, Democrat presidential nominee Hillary Clinton referred to half of the supporters of her opponent, businessman and Republican nominee for president Donald Trump, as “a basket of deplorables”. And while her rhetoric may have been music to the ears of all those attending Bab’s little soiree’ in New York, millions of Americans who happen to support Donald Trump find it insulting and disrespectful to say the least.

The former Secretary of State called these Trump supporters all “racist, sexist, homophobic, xenophobic, and Islamophobic”, which for her translates into “a basket of deplorables”. Hopefully this is not the way she will govern if elected, making a value judgment on literally millions of Americans that she hasn’t a clue about, but simply because they might disagree with her on a certain issue.

One can almost hear the Queen of Hearts from the other side of Alice’s looking glass screeching “off with their heads”! But then we realize that it’s just Hillary Clinton giving another campaign speech ridiculing her opponent’s supporters in her ‘fingernails on the blackboard’ tone of voice.

Apparently according to Hillary, if a person holds traditional Christian values which teaches them that certain lifestyle choices and other behaviors are immoral, and that they should love the sinner but hate the sin, then they suffer from some sort of “phobia”. Democrats like to accuse Republicans of using ‘code words’ to cover for racism and anything else they disagree with, so is ‘phobia’ just a ‘code word’ for “deplorable”?

Traditional values and religious teachings appear to have no place in a “progressive” America led by Hillary Clinton. And considering her husband’s activities over the years, it’s pretty obvious that she’s been very accepting of at least Bill Clinton’s immoral choices and behavior.

Likewise if a person believes that the United States as a nation has the right to protect its borders and prevent illegal immigration and violations of our national sovereignty, then that makes them “xenophobic”. At least according to Hillary Clinton and the progressive left. It apparently is of no concern to her that protecting our borders and stopping illegal immigration is a matter of national security. Which as president and Commander in Chief would be her foremost responsibility, to protect America from all enemies foreign and domestic.

Any American questioning the wisdom of allowing tens of thousands of “refugees” from areas in the world where Islamic terrorists also come from is “Islamophobic” under Hillary Clinton’s definition, and also “deplorable”. Common sense options such as creating safe spaces for these refugees in, or closer to their country of origin apparently isn’t even considered. Simply wanting to enforce current immigration laws on the books is “phobic” and obviously “deplorable” in some way, according to Hillary Clinton.

And criticizing the Black Lives Matter movement must make one a racist, even though the Black Lives Matter movement was built on the proven lie of “hands up, don’t shoot” which never happened, yet continues to be propagated by Democrats and Hillary Clinton as they beg for votes. Yes, it would seem that for Hillary Clinton and her party there is no room for a diversity of opinion or beliefs. It’s either their way or the highway, so-called “progressivism” at its very best.

But historically it’s always been a short step from one being described as “deplorable” to them eventually being judged as “undesirable”. In World War II the Nazis practiced that kind of rhetoric extensively, which ultimately led to the incarceration in concentration camps and the eventual murder of millions of undesirable and “deplorable” people. In Soviet Russia, dissent and disagreement with the government also led to a quick bullet to the back of the head, or long years of torture in the Soviet Gulags. Is that the “progressive future” that Hillary Clinton envisions for those she considers “deplorable”, simply because they view issues differently and disagree with her?

Well, Hillary Clinton might consider Trump supporters to be a “basket of deplorables”, but I suspect coming from the most dishonest, corrupt, and despicable politician in American history to ever run for the presidency, all those deplorable Trump supporters will wear that moniker like a badge of honor!