D.W. Wilber
|
Posted: Apr 30, 2016 12:01 AM
Share   Tweet
The opinions expressed by columnists are their own and do not necessarily represent the views of Townhall.com. 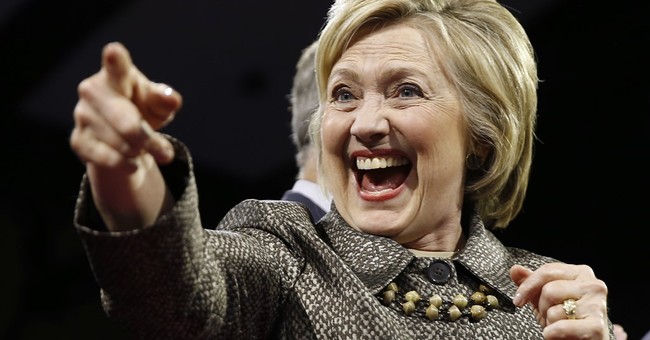 With the recent actions by Virginia’s Democrat Governor Terry McAuliffe reinstating the voting rights of convicted felons in his state, the Democrat Party has truly become the home for all the crooks, criminals and other misfits of society.

And since former President Bill Clinton’s involvement with the Clinton Foundation has now come under FBI scrutiny along with his wife Hillary’s e-mail scandal, with the stroke of the pen the Virginia governor has made it possible for both Bill and Hillary Clinton to be able to vote in future elections should they take up residence at FCI Petersburg. (That would be the Federal Correctional Institution in Petersburg for those not familiar with that particular acronym.)

Yes it seems that membership in the Democrat Party in today’s America is apparently now dependent upon one’s criminal record, their support for extreme liberal causes, or  for simply just being stupid.

As well-known comedian Bill Engvall says, “here’s your sign.”  For those unfamiliar with Bill Engvall or his comedy, “here’s your sign” refers to one of his comedy routines where he says that stupid people should wear signs that state “I’m stupid.”  A warning to the rest of us that we’re liable to hear some pretty ridiculous things emanating from the mouths of stupid people.  And it applies to Democrats as well.

If you believe that a chromosomal man should be able to ‘tinkle’ in whatever restroom he chooses regardless of whether he’s still ‘intact’, then you can fit right in with the Democrat Party.  They believe that accommodating ‘confused people,’ and potentially also pedophiles, sexual predators, and child molesters is more important than protecting young children and women.  There are two appropriate signs in this case, one says “Men” and the other says “Women,” and one’s chromosomes should determine which one they use.

Contrary to what the Democrats will try once again to hang around the Republican’s neck this political season, based on their support for ‘open bathrooms’ the first rounds in the “War on Women” have clearly been fired by the Democrats, not the Republican Party!

If you believe that abortion on demand, including late term abortions right up to the moment of delivery of a viable infant should be legal, well then look no further than the Democrat Party of America.  That’s where you’ll find your sign.  It’ll say “Planned Parenthood – Baby Parts For Sale”.

As Democrat Congresswoman Nancy Pelosi recently said about Hillary Clinton, their standard-bearer in this year’s election, “her record doesn’t matter, only that she’s a woman matters.” Well, that pretty much tells you what the philosophy of the party is all about. One’s merit and character doesn’t play a part.

Either that, or Nancy is off her meds again. But she definitely should be made to wear a huge sign warning people. If a highway billboard could fit around her neck that still wouldn’t be adequate.

If you believe that the Islamic Republic of Iran has any intention of abiding by the nuclear agreement they “negotiated” with the United States, well there’s a sign written in Persian you need to hang around your neck that says “I’m naïve and stupid.”  Secretary of State John Kerry needs to have a real big one hanging from his neck.  Along with the “Traitor” sign he got back during the Vietnam War.

And the retiring former Senate Majority Leader of the Democrat Party Harry Reid earned a sign for himself back during the 2012 presidential campaign, when he proclaimed that the Republican candidate Mitt Romney hadn’t paid any income taxes for a decade. Considering those comments and many others the Nevada Senator has made over his career, Reid’s sign will simply say “LIAR” in capital letters.

New York’s Democrat Senator Chuck Schumer should wear a sign that asks “Where’s the TV camera?” Since watching him hop around in the background of any TV interview with his party leadership while he tries his darndest to be on camera is something like watching a frog on a hot griddle.

There are some Republicans who should be wearing signs as well. Former House Speaker John Boehner needs to warn people to keep their distance lest their clothes get wet when he burst into tears again. And the current Senate Majority Leader Mitch McConnell should be wearing a sign that says “Not re-elected”.

And the Governor of the Commonwealth of Virginia definitely needs to be wearing a sign after his recent purely political stunt.  “Political Hack” would fit nicely hanging from the neck of Terry McAuliffe.

But, saving the best for last, wouldn’t it be grand to see a twelve by eight inch sign hanging from the neck of Hillary Clinton, black in color with white lettering that simply said “Clinton, Hillary, AKA Hillary Rodham Clinton, Inmate No. 1234567890.” Along with a matching one for her husband Bill.