Douglas MacKinnon
|
Posted: Mar 11, 2020 12:01 AM
Share   Tweet
The opinions expressed by columnists are their own and do not necessarily represent the views of Townhall.com. 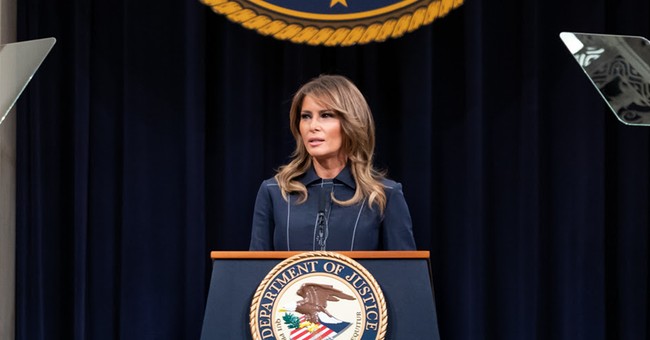 Anti-Trump NBC pundits Seth Meyers and Nicolle Wallace just mockingly asked if during the Coronavirus panic, it was proper for First Lady Melania Trump to give an update on the construction of the White House tennis pavilion.

“If people want to play tennis, they should be able to play tennis.  I feel very strongly about this.  But…our first lady, in the middle of a pandemic, posted a photo about how the tennis pavilion is going.  As someone who was in communications, do you think this is a good time to give people of America an update on the pavilion?”

Nicolle Wallace then looked at the photo of Melania Trump next to the construction site, burst out laughing, and obediently answered:  “No.”

Even though Wallace passes herself off as an expert communicator who once worked in the White House for President George W. Bush as well as the late Senator John McCain, I would stress her answer demonstrates a bias-tainted, true lack of understanding of her chosen field.

Seeing as how much of the nation is in a full-blown mental melt-down precisely because networks like NBC have continually fanned the flames of Coronavirus panic in a transparent and destructive search of clicks, viewers, and increased advertising dollars, it was exactly the correct time for the First Lady to focus on anything other than the virus.

Not only is this mostly media-induced panic creating real emotional trauma for countless Americans, it is literally responsible for the closing of hundreds of businesses and the loss of thousands of jobs.

Americans truly are desperate for any lighter news which will take their minds off the fake-news Armageddon they are constantly told they are facing.

Trump-bashing CNN next got into the act by professing its shock that while addressing a national PTA gathering in Alexandria, Virginia, First Lady Melania Trump did not talk about the Coronavirus, choosing instead to focus on her “Be best” platform to combat bullying.

Again, seeing as how CNN is one of the main disseminators of Coronavirus panic, it’s easy to understand why the reporters, editors, and executives at that network would be perplexed by the wise and calming decision of the First Lady not to add to a panic which is having a catastrophic-effect on millions of Americans.

The advice First Lady Melania Trump gave earlier in the week when no-life-of-their-own Twitter-trolls began to criticize her for the update on the tennis pavilion most especially applies to Meyers, Wallace, CNN and anyone looking to politically, personally, or commercially benefit from spreading panic about the Coronavirus.

That advice from the First Lady being:

“I encourage everyone who chooses to be negative & question my work at the White House to take time and contribute something good & productive in their own communities.  #BeBest.”

At the moment, “something good & productive” would be for the media and those politicians looking to use the virus as a partisan and pathetic way to weaken the reelection chances of President Trump to instead come together as one and move their collective feet off the gas pedal of purposeful panic and onto the braking-power of reassurance, facts, and hope.

If they need a lesson in how to accomplish that desperately needed task with class, dignity, and conviction, I have no doubt First Lady Melania Trump will be happy to show them the way.

After all, her “Be Best” program is also about turning bullies into productive members of society.