‘Green’ Activists Should Take A Hike 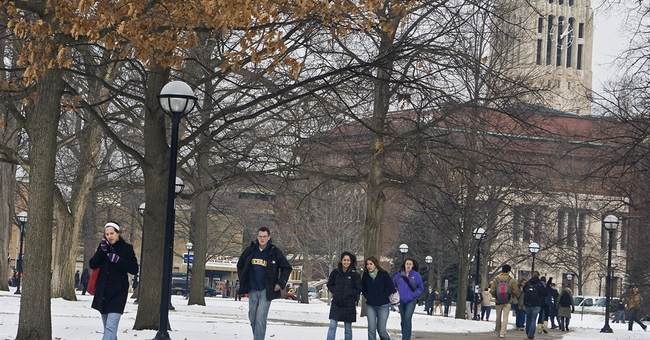 Chemical weapons are being used in Syria, Iran is on the verge of developing nuclear weapons, radical Islam is on the march in much of the world, American cities such as Chicago resemble a war zone, our health-care system is on the verge of collapse, and yet a growing number of our “best and brightest” college and university students have decided to take a stand against ... coal, petroleum and natural gas companies.

At more than 300 colleges and universities across the United States, these “green” activists are demanding that their schools instantly divest evil fossil-fuel stocks from their endowments. With much of the world spiraling out of control, these “future leaders” have taken it upon themselves to attack companies that employ millions of middle-class Americans and power our nation.

Said one of these student leaders, “We look at our schools as a representation of ourselves. I would like to know my school is putting its money in companies that are looking out for the best welfare of people.”

If one needed more evidence that little or nothing of value is being taught at these liberal “institutions of higher learning,” this temper-tantrum being orchestrated by a collection of hypocritical spoiled brats should stand as a prime example.

Why hypocritical? Well, it’s a better than even guess that virtually all of these “green” student activists drive cars, avail themselves of public transportation, wear shoes, turn on the heat in cold weather and the air conditioning in the summer, text nonstop, and use computers, video games, and tablets. All things which use or are made from fossil fuels.

Maybe these student activists would have all the universities and colleges divest Exxon Mobil Corp. stock and invest in Solyndra instead. Whoops. Forgot. That particular “green” company, where our green-enabling president invested over $500 million in taxpayer money while posing for a photo-op, went belly-up.

Perhaps these environmentally aware student activists would have their colleges and universities invest in the rest of President Obama’s $80 billion “clean-energy” program. No. That wouldn’t work either, as most of the “green” companies aided by that initiative have either declared bankruptcy, gone out of business, or will never show a dime in profit while continually sucking money from hard-working Americans.

If these “green” student activists truly believe in what they are selling, then they should stop wearing any fancy running shoes (made with petroleum products), give up using all electronics and walk to a “green” open-air school located in some nearby field.

That, or if they really want to make a lasting statement and sacrifice, they could join the armed forces and serve with the heroic young men and women their own age who actually are making a difference every single day.