Why Do We Fear Calling Obama a Socialist? 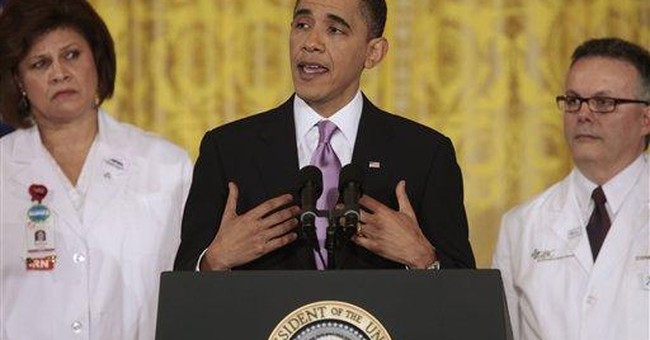 I am honestly confused. Why is it not permissible for us to call President Obama a socialist? Why do so many with a media platform dodge the question when asked point-blank if Obama is a socialist?

While obviously expected from those in the mainstream media who look upon Obama as an oracle, it’s disappointing and disingenuous when Republican “leaders” refuse to describe the president as a socialist.

Maybe some in the GOP and the mainstream media simply don’t know or understand the definition. The Merriam-Webster dictionary defines “socialism” as: “Any of various economic and political theories advocating collective or governmental ownership and administration of the means of production and distribution of goods”

Even with the broadest of interpretations, Obama’s beliefs seem to fall within that definition.

For the president, he seems to believe that should the country actually realize that he is in fact a “socialist” and “ideologue,” then he will be a one-term president at best. For certain GOP leaders, they seem to fear a mainstream media which will label them “politically incorrect,” “rude,” “offensive” or much worse should they assign those definitions to the president.

The president is so fearful of these two words that he has repeatedly gone out of his way to publicly deny he is an ideologue or a socialist. Why? As “brilliant” as the left tells us Obama is, maybe he doesn’t know or understand the definition of “ideologue.”

Turning to another well-respected source, the American Heritage dictionary defines “ideologue” as: “An advocate of a particular ideology, especially an official exponent of that ideology.”

Again, what is wrong with that? As a conservative, I’d certainly want a president who believed in traditional values, smaller government, lower taxes, the Second Amendment, personal responsibility and secure borders to be an “advocate of that particular ideology.” Don’t we want and need our presidents to be ideologues? Isn’t that the whole idea?

So, for the president to deny he is an “ideologue” is not only foolish and false, but an insult to the intelligence of the American electorate. The problem for the president is not that he is an ideologue, but that he’s a socialist.

Doesn’t he want a government-run national health-care system which will control one-fifth of our economy? Doesn’t he want to take money from the “elite” and redistribute that wealth to the “poor?” When running for president, didn’t Obama himself say, "When you spread the wealth around, it's good for everybody.”

Doesn’t his party want to reinstate the “Fairness Doctrine” to muzzle conservative thought? Don’t all of these goals of the president and his party fall within the definition of “socialism?”

Obama has every right to be a socialist. Fortunately, our form of government still allows freedom of expression. Unlike Lenin or Hugo Chavez in Venezuela however, the president hopes -- with a huge assist from the liberal intelligentsia -- to recast the United States into a socialist nanny-state in small, incremental steps.

He may yet succeed. To paraphrase Edmund Burke -- one of Obama’s favorite philosophers -- “The only thing necessary for the triumph of socialism is for good people to do nothing.”

Well, one way to start to do something is to call Obama what he is: A socialist.