A Theology of Hunting: Why God Loves Hunting & Hunters 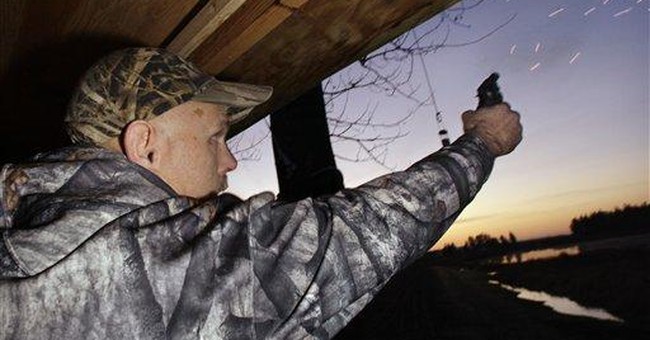 I understand it when the idolatrous PETA people who worship jackrabbits over Jesus get their panties in a wad over hunting. I expect it, I like it and—truth be told—I’d really miss it if they did not pop a blood vein in their forehead when smacked with the facts.

However, lately I’ve been getting hate mail and weird looks from “Christians” who ardently believe that God, Jesus, Moses, John, Paul, George and Ringo (I know, they get them confused) are, supposedly, vehemently opposed to hunting animals (they’re right about McCartney). I have even had some sassy Christians say that fishing is evil because it hurts the fish. No kidding? I wouldn’t have thought that a hook in the mouth would hurt. They, therefore, conclude that since fish hooks hurt that Jesus would never fish nor be friendly toward those who do.

Hey, St. Dillweed, have you ever actually read the gospels or do you just smoke ganja and make this crap up as you go? FYI: The majority of Jesus’ chosen disciples were fishermen, and the fish they gathered didn’t die of old age. For God’s sake, Jesus himself was part and parcel of killing so many fish—I’m sorry, “catching” so many fish—that at one point Peter’s boat nearly sank under the weight of this Christ-spawned catch (Luke 5). And then there’s the loaves and FISHES miracle when Jesus threw a Puff Daddy sized party for 5,000 plus people (that’s a lot of sushi). But we won’t talk about that because you’re probably overwhelmed as it is.

Let’s go back to hunting.

In addition to these saints’ specious, irrational and unbiblical hatred of hunting and hunters, another phenomenon has manifested itself in which the atheistic and/or pantheistic couldn’t-be-weirder tree-ogling blowhards have started quoting Scripture to me and tossing God’s name around in this debate like a coked-up Courtney Love at a Kid Rock concert. How convenient.

Therefore, seeing that a sizable chunk of the Church is getting goofy and are buying into the Disney-fueled misinformation machine and that PETA pariahs are now parsing biblical passages for propagandistic purposes, I figure it is high time to check out the holy Bible and lay out exactly what it does say about hunting and hunters. Being the capitalist pig that I am, I will do it in a new book that I am pitching for 2009 titled: A Theology of Hunting: Why God Loves Hunting & Hunters. For now here’s a little hors d'oeuvre about the Holy One and hunting.

First off, much to my chagrin, I must admit that the Bible contains just trace amounts of direct references to hunters and hunting. What it does contain about hunting, though, is overwhelmingly positive with only one condemnation leveled at a hunter who does not “roast his prey” (Proverbs 12:27a). That’s one. Not a bazillion. Only one.

Even though there are few direct references regarding hunting and hunters, there’s an abundance of analogies and imagery taken from hunting used in Scripture. Just a cursory glance at the Psalms and the Prophets provides hunting similes aplenty. This is interesting.

Let’s see . . . rare literal references and massive amounts of hunting imagery used to communicate divine truth. Hmmm. What could this mean? Could it be that the ubiquitous use of hunting metaphors equates that God’s mind was quite taken with the topic?

In addition, should one conclude that because hunting metaphors are so profuse that the biblical crowd this book was originally penned for would have had to be a hunting community or the references would have flown straight over their heads like Kafka’s symbolism eclipses Britney Spears’ brain? The answer to those questions would be yes and yes.

Now, for those not jacked up on raw emotion and still able to think, check out this pro-hunting stuff in book one of the Bible, Genesis:

1. You don’t have to read too far in the Bible, like . . . uh . . . the first chapter, until you’re hit with the fact that man is to exert dominion over animals, birds and fish. That’s conservation and game management, folks.

2. When our primal parents blew it in the garden by blowing off God’s command in Genesis chapter three, God took it upon himself to clothe their naked rebel butts with leather and fur. It wasn’t faux fur or pleather. It was the real schizna, mamasita. Deal with that, Pam Anderson. The silicone must have flowed up to her synapses.

3. In Genesis chapter four, Abel killed a lamb to sacrifice and found favor with God. If Yahweh wasn’t happy about that He would have zapped him on the spot. It was the vegan Cain who got canned.

4. In Genesis chapter six God drowned not only a lot of wicked men, women and children in the great flood, but also a lot of animals, too. Like in the 99.9 percentile range. That was the largest game depredation ever seen. Only two critters of each species were afforded a space on the ark. Game management to the extreme, God style.

5. In Genesis chapter nine, after the waters of the flood receded and Noah and his tribe had docked their boat, God told them that they could eat the animals they had just sailed with for the last forty days and nights. I wonder which one they chowed down on first? I would have eaten one of the zebras. If you remove their fat they make great steaks, plus Noah could have decorated his house with the zebra rug.

6. In Genesis chapter ten, Nimrod floats to the literary surface as a mighty hunter before the Lord. What does that mean? I don’t know, but I’d like to be one. 7. In Genesis chapter twenty-two when Abraham was going to offer up his only son unto God, Jehovah gave him an out by providing for Abraham a ram instead of Isaac. It’s not a hunting reference, but it is a nice little sneak peek into God’s mind that He prefers people to animals—something that the PETA people do not get.

8. And lastly for now (‘til my book gets brokered), in Genesis chapter twenty-seven Isaac, one of Jehovah’s main covenant kids, gets to feeling a bit peckish one day, and you know what he asks for to satisfy his hunger? Was it tofu? No. Lentils? Wrong again. A wheat grass smoothie? Strike three, Chicken Little. It was venison, a Ted Nugent back strap fever feast, that’s what! Yep, Isaac commanded his son to pick up his bow and collect him a buck for some down home barbeque.

For PETA or some wrapped around an emotional axle Christian to make the Bible anti-hunting they would need an exacto knife. Nowhere in the entirety of holy writ does God, Jesus, Moses, the apostles or the prophets have any problem whatsoever with those who hunt righteously and utilize the meat fully.