Doreen Denny
|
Posted: Mar 13, 2020 12:00 AM
Share   Tweet
The opinions expressed by columnists are their own and do not necessarily represent the views of Townhall.com. 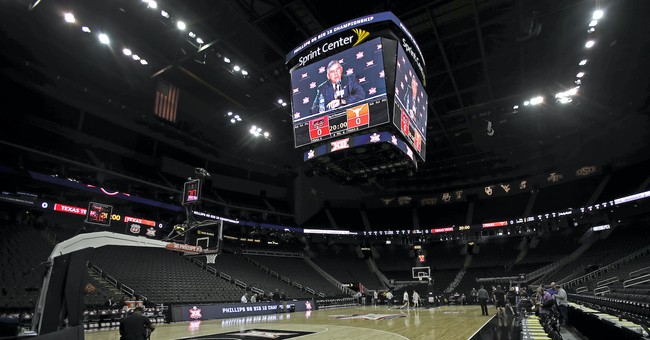 NCAA President Mark Emmert walked into a public arena recently that could have been a lion’s den for him. Emmert faces widespread and eroding public trust in the NCAA, for good reason. The century-old institution is failing its college players, men and women, in the modern era.

That lion’s den was a U.S. Senate hearing on Name, Image and Likeness (NIL) rules and athlete compensation. It didn’t take long for Senators to expose many problems of transparency, consistency and fairness plaguing the NCAA.  In particular, the issue of schools profiting from stand-out athletes at no benefit to the player has hit a tipping point.

With the  popularity of March Madness, Super Bowl-style marketing schemes, and video gaming systems  promoting images of college athletes in fantasy competition, California passed a law making it illegal for state schools to punish an athlete for profiting from his or her name, image or likeness.  The law is due to take effect in 2023.

Understandably, Emmert is looking for the cover of Congress to avoid the pitfalls of a patchwork of state NIL policies. He would like to avoid the consequences that could result from fueling a wild west college athlete endorsement market.

But the NCAA has lost its credibility. It no longer stands up for student-athletes. As a nonprofit organization associated with educational institutions, the NCAA should be supporting players as students, not professionals, but also recognizing their value. Academic integrity should be at the core of any model of intercollegiate competition.

So should fair play for women and upholding laws against sex discrimination.

This is where the NCAA has an even bigger black eye.  As Emmert faces lawmakers on Capitol Hill and confronts questions of fairness for college athletes, Concerned Women for America has this question for him:  Why is the NCAA not standing up for fair play in women’s sports and protecting the name, image and likeness of female athletics?

Three aspiring female track athletes recently sued their local high schools and the Connecticut Interscholastic Athletic Conference (CIAC) for depriving them of fair competition, the chance to advance and be seen by college coaches, and win the state championships they deserved, because CIAC schools allow males who identify as girls to compete in girls’ sports.  It’s clear from the starting blocks who has the advantage. These high school girls would rather focus on excelling in their sport than face the glare of the national spotlight. Filing the lawsuit was a last resort to seek what should be a Title IX protection against sex discrimination.

Heading to college next year won’t help their case, or fair play for any female athlete, as the NCAA condones the same injustice.

Last May, for the first time in history, an NCAA national title in women’s track and field was awarded to a male athlete from Franklin Pierce University. The athlete was undeniably male in biology and physiology but identifying as a woman and taking cross-sex hormones to transform outward appearance. In previous years, he had competed on the Franklin Pierce men’s team.

College female track athletes throughout the season were sidelined in final heats, pushed off the podium, and awarded lower place medals. NCAA’s Northeast-10 Conference celebrated the hurdler “Women’s Track Athlete of the Week” for excelling against female competition. Franklin Pierce today proudly displays a trophy on the shelf for winning a national title in women’s sports…with a male athlete. In October, NCAA’s Big Sky Conference awarded University of Montana “Female Athlete of the Week” honors to a male cross-country runner who’d been a standout on the men’s team for three years.

How can having male athletes compete in women’s sports ever be fair for women and girls? It can’t. Expert studies of the effects of cross-sex hormones for men prove what we know instinctively and scientifically as true:  male and female physiology is fundamentally distinct and will always give physical advantage to male athletes. But that hasn’t stopped the NCAA from sanctioning, honoring and awarding national titles to male athletes in what should be Title IX-protected women’s sports.

For #GirlDads, their daughters, and all girls in America who hope to excel as athletes, the NCAA has spoken: your college dreams don’t matter. Women’s sports are no longer just for women. Any school allowing male athletes to compete on women’s teams are welcome in NCAA women’s competition and celebrated as champions.

Women and girls deserve fair competition and a level playing field in sports based on our unique and distinct ability. The NCAA, setting the rules for national intercollegiate competition, should be the first to acknowledge this fact and stand up for women athletes. Today, the integrity of women's sports is on the line in name, image and likeness. We’d like to hear what Mark Emmert has to say.

Doreen Denny is Vice President of Government Relations for Concerned Women for America and the proud mother of a current NCAA college student-athlete.