Rewriting the Constitution With the Stroke of His Pen

Donald Lambro
|
Posted: Nov 02, 2018 12:01 AM
Share   Tweet
The opinions expressed by columnists are their own and do not necessarily represent the views of Townhall.com. 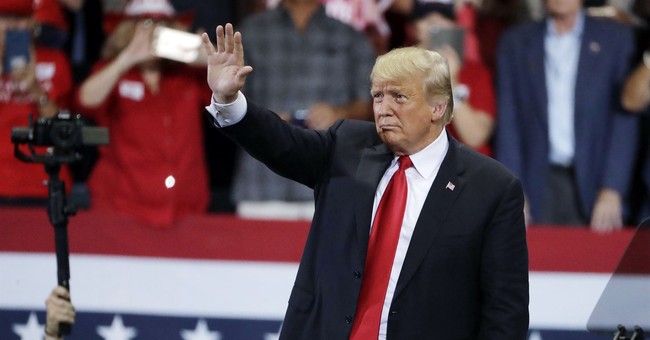 WASHINGTON - Less than a week before the midterm elections, President Trump is betting that one issue above all others will decide whether Republicans keep control of Congress: immigration.

That was Trump’s dominant issue in 2016 and he is playing the immigration card again to bring out his political base, threatening to sign a dubious executive order to curtail birth-right citizenship, sending 5,200 more troops to the Mexican border, and other politically-honed actions to deal with a caravan of Central American migrants heading toward the U.S.

Using inflammatory language to describe the situation, Trump is calling it an “invasion,” defining these migrants as prospective “illegals” who are planning to cross over our border, bringing with them criminals and worse.

But the truth is these migrants do not intend to sneak across the border under cover of darkness, but plan to present themselves to U.S. border officials, pleading U.S. asylum from crime, oppression and violence.

Their numbers are made up to a substantial degree of women and children, and by law their petitions for asylum in the U.S. are supposed to be heard by U.S. judicial officials.

Then, on Tuesday, Trump threw another political bomb into the midterm elections, suggesting that he could with the stroke of a pen sign an executive order that would nullify the 14th amendment to the Constitution allowing birth-right citizenship.

Where did he get such an idea? Well, he said in an interview on Axios that was released Tuesday as part of a new HBO series, “It was always told to me that you needed a constitutional amendment. Guess what? You don’t,” Trump said.

When told that his view is widely disputed, the president insisted, “You can definitely do it with an act of Congress. But now they’re saying I can do it with an executive order.”

But Constitutional experts and other legal analysts said the president has no such powers to change the nation’s founding document.

“Legal experts have debated for years how to interpret the citizenship clause of the Constitution’s 14th Amendment, but the consensus is one-sided: Most agree with the long-held tradition that it grants citizenship to those born on U.S. soil,” writes Robert Barnes, chief Supreme Court correspondent for the Washington Post.

Despite Trump’s belief that he has the power on his own to rewrite the Constitution, all of the leaders in Congress agree that he does not, including those who are favorable to Trump, like House Speaker Paul D. Ryan of Wisconsin, Sen. Lindsey O. Graham of South Carolina.

Even conservative legal analysts favored by Trump say that the 14th Amendment’s “grant of citizenship was beyond dispute,” Barnes writes.

James C. Ho, “a conservative recently nominated by Trump and confirmed to the U.S. Court of Appeals for the 5th Circuit, is among them,” he says.

In a 2006 essay, Ho wrote that “Birthright citizenship is guaranteed by the 14th Amendment… That birthright is protected no less for children of undocumented persons than for descendants of Mayflower passengers.”

Trump is widely known for playing fast and loose with the facts, and making things up as he goes along.

But in the Axios interview, he let loose with a walloping falsehood, declaring that the United States is the only country that offers birthright citizenship.

NumbersUSA, which conducts polls on immigration issues, says that at least 33 countries grant citizenship to anyone born in their country. The list includes Canada, Mexico, Brazil, Argentina and other countries in Central and South America.

Why Trump is spearheading this birthright issue is a mystery, because polls show that changing the 14th Amendment is very unpopular.

I don’t know who’s advising Trump on this issue, but he’d better get rid of them. They’re feeding him fake news.