Donald Lambro
|
Posted: Jan 12, 2018 12:01 AM
Share   Tweet
The opinions expressed by columnists are their own and do not necessarily represent the views of Townhall.com. 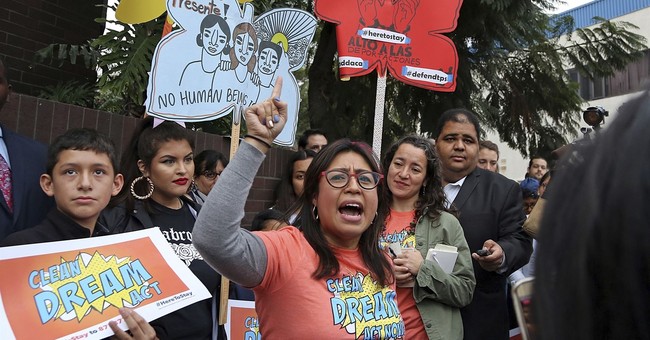 WASHINGTON - President Trump continued to soften a few of his hardcore positions on immigration Tuesday at an extraordinary, bipartisan, deal-cutting meeting with lawmakers at the White House.

Attempting to broker a compromise for the $18 billion wall he wants to build on the U.S.-Mexican border, Trump seemed to be willing to sign a “clean” stand alone bill that would let most of the undocumented immigrants — who were brought here as children — to remain in the country.

“I will take all of the heat you want to give me,” Trump told the House and Senate leaders, acknowledging that any move to retain the Obama administration’s Deferred Action for Childhood Arrivals (DACA) program would infuriate his political base.

The clean bill idea didn’t originate with Trump, but with Democratic Sen. Dianne Feinstein of California, who said the idea was part of the price for breaking the budgetary logjam to pay for the wall.

But at a key point in the televised legislative strategy meeting, Trump appeared to suggest that he could support legislation, as he put it, for a “clean DACA bill.”

And at another point, said he was willing to let Congress handle the details and would sign the bill they sent him.

Trump was not only ready to compromise on DACA , but on the length of the wall as well, and possibly the cost. It didn’t need to be built along the entire 2,000-mile border, but far less than that, he said.

“There’s lot’s of places where you don’t need a wall because of nature. You’ve got a mountain and rivers, you got a violent river,” Trump said, adding that he would “like to build [it] under budget, ahead of schedule.”

Arizona Sen. Jeff Flake, one of the president’s harshest critics, called his remarks on the reduced length of the wall “the best part” of the meeting.

In fact, with border security surveillance measures, the actual wall would only cover 316 miles.

The tone of the discussion, and Trump’s eagerness to strike a deal, triggered warm responses from some of his sharpest critics in both parties.

Former Florida governor Jeb Bush tweeted that he was “encouraged” by Trump’s bipartisan outreach to both sides of the aisle.

The president seemed fully cognizant of the dangerous political territory he was entering, and repeatedly said in the meeting that he planned to push for a “comprehensive” immigration reform bill after reaching a deal on DACA.

But maybe Trump wasn’t acting out of the goodness of his heart to save the dreamers from mass deportation.

A federal judge in San Francisco sent a little message to the administration Tuesday, in the form of a nationwide preliminary injunction preventing the Trump government from abolishing the DACA program.

U.S. District Judge William Alsup said the DACA work protections will remain untouched for the 690,000 immigrants as long as the case continues to wind its way through the courts.

The judge has not only ruled on the merits of the case, but made it clear to the Trump administration that he is not to harm them in any way until a final decision is reached.

“Plaintiffs have clearly demonstrated that they are likely to suffer serious irreparable harm absent on injunction,” Alsup wrote.

“Before DACA, Individual Plaintiffs, brought to America as children, faced a tough set of life and career choices turning on the comparative probabilities of being deported versus remaining here. DACA gave them a more tolerable set of choices, including joining the mainstream workforce.”

The lawsuit was brought by California’s Attorney General Xavier Becerra, along with the attorney generals of Maine, Maryland and Minnesota, the University of California, and DACA recipients, among others.

In their lawsuit, the plaintiffs said the administration had failed to follow the law in its decision to end the program.

Last year on September 5, Attorney General Jeff Sessions announced that the DACA program would be terminated and no further applications would be accepted.

But Judge Alsup intervened, ruling that while the case was being heard, those already approved for DACA protections and work permits can renew them before they expire.

Now Trump appears to have had a sudden change of heart. Why?

Near the end of last year, polls showed 73 percent of voters supported legislation to protect dreamers from deportation, according to a Politico Morning Consult poll. And 54 percent wanted to give them a path to citizenship.

And that’s when Trump switched his position on Obama’s DACA program in a New York minute.