Donald Lambro
|
Posted: Dec 02, 2016 12:01 AM
Share   Tweet
The opinions expressed by columnists are their own and do not necessarily represent the views of Townhall.com. 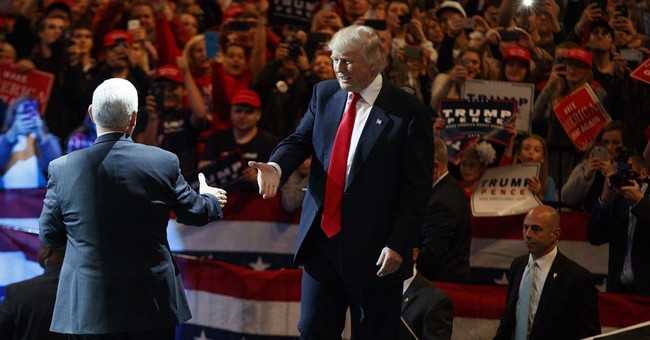 WASHINGTON -- President-elect Donald Trump and his Cabinet nominees won't be in office until next month, but the stock market is already showing bullish signs of better days ahead under his pro-growth, tax reform agenda.

On Wall Street, they're calling it "the Trump rally," which has sent the Dow soaring into record territory solely on the expectations that his presidency is going to break the tax-and-spend shackles the Democrats have slapped on the U.S. economy.

It's not the kind of administration his most fervent fans may have expected, filled as it is by Wall Street billionaires and nominees straight out of the GOP's establishment.

His top picks to date have shown us what his highest priority is: dismantling President Obama's failed economic policies and replacing them with lower tax rates and the kind of economic deregulation that will get America moving again.

It's already being hailed as the largest tax cut since Ronald Reagan, who ushered in an economic expansion that gave us 4, 5, 6, 7 and 8 percent quarterly GDP growth rates and ended a severe recession in just two years.

Corporate tax rates -- the highest in the industrialized world -- will be sharply reduced, spurring increased capital investment for business expansion and new start-up enterprises, which have been notoriously weak under the Obama administration.

Democratic leaders, whose leftist agenda was spurned by the voters, lost no time in attempting to resurrect their false claims that Trump's tax cuts will favor only the rich.

Both men repeatedly said during the interview that the U.S. economy will be Trump's highest priority after taking office, as it will in the Republican House and Senate, where the GOP's ambitious tax reform bill will be ready to hit the ground running on day one.

But if Trump's die-hard, grassroots supporters believed that he would break the big-business establishment mold in staffing his team, they were in for a rude awakening.

Indeed, Trump "is putting together what will be the wealthiest administration in modern American history," The Washington Post reported Thursday -- including at least two billionaires and several multimillionaires.

Mnuchin has been a Wall Street veteran for decades, working at high-level executive posts at Goldman Sachs for 20 years until he left to build a successful hedge fund, Dune Capital, and a very successful career in the banking industry.

Ross is reported to have amassed a $2.5 billion fortune as an industrialist. His likely deputy at Commerce is Todd Rickets, son of a multibillionaire and the co-owner of the Chicago Cubs.

To date, the rest of Trump's nominating list reads like a Who's Who of the rich and famous.

Heading up the Education Department will be Betsy DeVos, a Michigan billionaire and the daughter of Richard DeVos, co-founder of Amway.

Meantime, you can't get much cozier with the GOP's establishment than Trump's nomination for transportation secretary: Elaine Chao, daughter of a shipping magnate and the wife of Senate Majority Leader Mitch McConnell.

But what matters in all this is not how wealthy they are or their long connections to the GOP's establishment, but their experience and their ability to move Trump's agenda on Capitol Hill.

In their CNBC interview Wednesday on the business network's morning program, Mnuchin and Ross went to great lengths to emphasize that they would work together with GOP House and Senate leaders on a tax reform bill that Trump hopes will be the first bill he signs into law.

Both men said the administration's goal will be to boost annual economic growth by 3 to 4 percent, a level that Obama never achieved over his eight years in office.

But there are major differences between Trump's tax reform plan and the bill Republican leaders have crafted, which would cut taxes across the board, but not as much as Trump's intention to make deeper cuts for lower- and middle-income Americans.

There are also issues being negotiated over reducing or eliminating certain tax breaks and loopholes for business, to make the tax changes as revenue-neutral as possible.

House Speaker Paul Ryan signaled this week that he was confident that a compromise bill can be achieved early next year. "I am excited to get to work with this strong team to fix our broken tax code, ease the regulatory burden on American businesses and grow our economy," he said.

"They understand that modernizing our outdated, anti-competitive tax system will be the most effective way to produce the economic growth that puts more people to work in good jobs," Engler said.

Throughout his bombastic campaign, Trump played fast and loose with his histrionic, incendiary rhetoric that made a lot of promises he could not and cannot keep.

But the campaign's over, and now it's time to negotiate with the governing institution he rarely mentioned in his off-the-cuff speeches: Congress.

It says a lot about the real Donald Trump that he is now turning to heavyweight establishment figures to close the deal.