Trump is Vindictive, Insulting -- And May Need A Shrink

Donald Lambro
|
Posted: Mar 02, 2016 12:01 AM
Share   Tweet
The opinions expressed by columnists are their own and do not necessarily represent the views of Townhall.com. 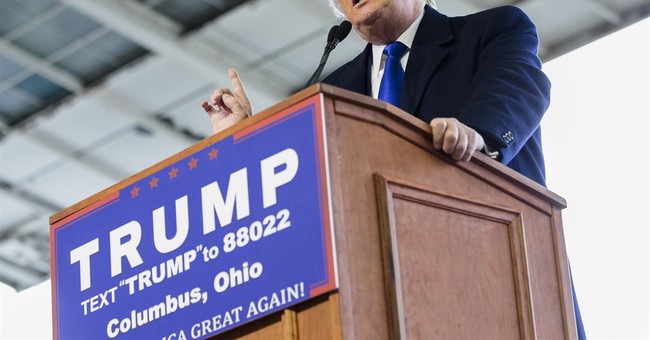 WASHINGTON -- Donald Trump talks in simplistic, egocentric, combative terms about how he will govern if he wins the presidency, but he never mentions Congress.

Go through all of the boastful promises that he's made at his rallies and the debates, which he says are "a waste of time. He seemingly suggests that he will do these things alone:

Slash the budget, cut taxes, beef up the military, erect a 2,000-mile concrete wall costing tens of billions of dollars along our southwestern border with Mexico, and create a nationwide police force to round up and deport 11 million undocumented Hispanic migrants.

Apparently, Trump skipped his classes in Government 101, the ones dealing with the three co-equal branches of government that were set forth by the Founding Fathers in the U.S. Constitution.

The last time I looked, Congress controlled the purse strings of the government. No revenue can be spent, reduced or rescinded without the written approval of a majority of 535 members of Congress.

Don't get me wrong: I'm all for not just cutting, but getting rid of wasteful, outmoded, inefficient agencies. I've written books detailing where we can do that, saving more than $200 billion -- including "Fat City: How Washington Wastes Your Taxes," which President Ronald Reagan passed out at his very first Cabinet meeting. (His budget director, David Stockman, sought to eliminate or cut back some of those agencies, with limited success.)

But getting a majority of Congress isn't easy, and would likely be harder, if not almost impossible, for someone with Trump's insulting temperament.

Republicans control both houses of Congress and will likely hold on to them in November, but Trump is obviously not popular among GOP lawmakers. In fact, he's downright unpopular, even among rank-and-file conservatives.

At this point in his campaign, you could fit the number of GOP lawmakers who've endorsed him in a telephone booth.

There are a lot of things Trump is proposing to do that are deeply disturbing and should frighten Americans who believe in the First Amendment. You know, the one where our Founding Fathers declared that "Congress shall make no law ... abridging the freedom of speech, or of the press ..."

Trump is well known as a litigious bully who threatens critics with legal action simply for criticizing him, which is their right under the Constitution. Over the course of his campaign, he has angrily hurled threats of a "big lawsuit" when someone says or writes something that displeases him.

Last Friday, during rambling remarks at a campaign appearance in Fort Worth, Texas, Trump said he would "open up our libel laws" to make it easier to bring lawsuits against people who say or write "negative" things about him.

"One of the things I'm going to do if I win, I'm going to open up our libel law so when they write purposely negative and horrible and false articles we can sue them and win lots of money," he said, according to a dispatch by the Reuters news service.

Trump specifically singled out The New York Times and The Washington Post as his main targets, adding, "With me they're not protected. We're going to have people sue like you've never been sued before."

That is meant "to intimidate and punish" his many critics who come after him, writes fellow columnist George Will. "It is not news that he has neither respect for nor knowledge of the Constitution. ... His obvious aim is to chill free speech, for the comfort of the political class."

Trump's anti-free speech threats remind historians of the Alien and Sedition Acts passed by Congress in 1798 and signed into law by the thin-skinned President John Adams. They contained four laws, one of which made it a federal crime to publish false, scandalous and malicious articles against the government or its officials.

The acts were bitterly attacked at the time as an attempt to stifle criticism of the Adams administration, and were opposed by Thomas Jefferson and James Madison as an assault on free speech. They expired in 1801.

What kind of president would want to copy the intent of 18th-century laws that punish free speech? Someone who is vengeful and would attempt to use the power of Big Government and the police state to threaten and silence his critics.

Consider one example of what a President Trump has in store for any American who would dare oppose him. When the former reality television celebrity learned that Thomas S. Ricketts, one of the owners of a baseball team and a major GOP donor, was opposing him, he threatened him with legal retaliation.

"I hear the (Ricketts) family," Trump tweeted, "who own the Chicago Cubs, are secretly spending $'s against me. They better be careful, they have a lot to hide!"

Trump is putting the country on notice that if he becomes president, with all the power and prerogatives that comes with that office, he's coming after anyone who has the temerity to criticize him.

In one of his latest threats to the news media and to The Washington Post in particular, Trump said, "If I become president, oh, do they have problems. They're going to have such problems."

These are the kind of malevolent, get-even, Nixonian practices Trump would bring to his presidency, declaring war on anyone who opposes him.

At 6:30 a.m. one day, Trump tweeted a quote from the Italian fascist dictator Benito Mussolini, which said that "It is better to live one day as a lion than 100 years as a sheep."

When someone questioned its origin, Trump replied, "What difference does it make if it was Mussolini or somebody else? It's a very good quote."

Maybe he's telling us, "I've got very sharp claws, so don't anger me."

Somebody call in a shrink.