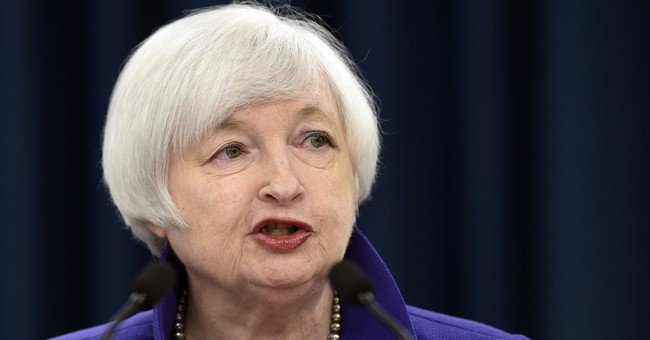 The fragile Obama economy remains in intensive care, still hooked up to the Federal Reserve's life support system but with a drop less medicine.

After seven, long painful years of a subpar, low wage, slow growth economy, the Fed finally decided this week that it was safe to raise interest rates by an infinitesimal, teeny-tiny quarter of a percentage point.

It's not exactly clear why Fed Chairman Janet Yellen summoned the courage to leave the safety of virtually zero interest rates. It's not as if the economy was running at full throttle.

Industrial output fell by 0.6 percent for the third straight month in November, retail sales haven't been striking any records, and sales of previously owned homes are rising only marginally.

The Institute for Supply Management in Chicago said its business barometer declined 7.5 percent last month in the face of tumbling orders. And many other weak economic signs are pointing to modest growth in the fourth quarter.

"It suggests there is no obvious uplift for growth in the near term," said Millan Mulraine, deputy chief economist at TD Securities in New York.

Seven years in an economic ICU is certainly a record, one that's likely to continue into 2016 and beyond if Hillary Clinton follows Obama into the White House.

She has already announced that her economic agenda will be a carbon copy of Obama's failed policies: billions of dollars more on infrastructure spending, and higher taxes on the wealthy, i.e. investors, businesses and employers.

Remember how that turned out in Obama's dismal first term and continued through his second?
But Yellen has been postponing an interest rate increase for so long it has became an embarrassment for her, the Fed and the Obama administration.

But this time, Yellen's back was against the wall. She had said once too many times that the economy is getting stronger, only to see yet another disappointing decline in the quarterly gross domestic product rate.
She knew that raising rates at this point could backfire on her, and her reputation was on the line. So this time, even facing a pile of weak economic data, she went for the "Hail Mary" pass.

"The underlying health of the U.S. economy, I consider to be quite sound," she said at a new conference. Really?

Yet there's widespread speculation across the business community that even a minimal hike in the Fed's rates will probably mean higher mortgage rates when home sales are anemic.

In 2006, the last time the Fed raised interest rates, the pace of housing starts were nearly 2 million. In the Obama economy they were barely at 1.06 million.

Let's face it, the Fed's zero interest rate was not all it was cracked up to be, even in the best of circumstances.

That should be obvious to anyone who has followed the weak GDP rate since the economy plunged into a steep recession in 2007. Yes, things are better, but they're not that better.

Obama's 5 percent unemployment rate is a shameful charade, with much of its decline due to long-unemployed, uncounted job-seekers dropping out of the workforce until the job-picture improves. For many, it hasn't.

Moreover, a very large part of the U.S. employment rate is made up of part-time, low-paying jobs among millions of people who need and want full-time work.

Lately, the national news media has been reporting that terrorism has replaced the economy as the most important problems facing our country.

"About one in six Americans, 16%, now identify terrorism as the most important U.S. problem, up from just 3% in early November," says the Gallup Poll.

But its pollsters say the economy is still a big problem for many Americans, only they mention different aspects of it during the survey.

"In December, 9 percent of Americans listed the economy in general terms as the most important problem, the lowest percentage to mention the issue since the end of 2007, before the depths of the recession took hold," Gallup said this week.

However, while "mentions of the economy have dropped since then, it has remained one of the most frequently named issues," they said.

"This significant drop in December does not suggest a dramatic shift in the way Americans are viewing the economy, but instead indicates that terrorism concerns have, at least temporarily, occupied more space in Americans' minds when they are asked to name the top problem facing the U.S.," Gallup explained.

It is understandable that when radical Islamic terrorists are waging war in distant lands, it is not front and center in our minds. But when they're attacking us in our homeland, and neighborhoods, as they did in San Bernardino, Calif., we are all in danger.

Meantime, Obama is still getting very high disapproval marks on both the economy and terrorism.
Fifty-one percent of Americans polled by the Washington Post and ABC News this week disapprove of the overall job he is doing as president. Forty-five percent approve.

They're split on how he has handled the economy, 48 disapprove and 48 percent approve.

Nearly 60 percent disapprove of how he is dealing with the Islamic State, far and away his worst score on national security issues. Only 35 percent said they approve of the job he's doing.