Clinton Could Learn From Her Husband's DLC History 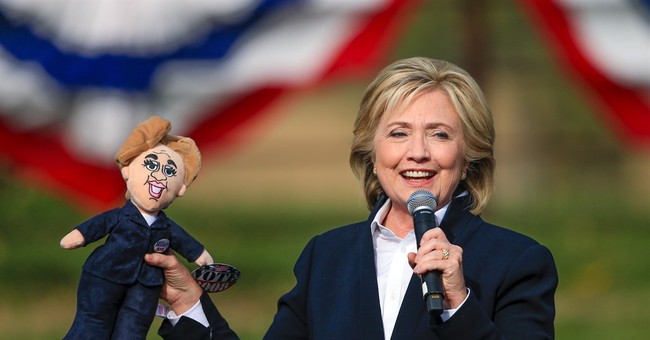 WASHINGTON -- Hillary Clinton flip-flopped this week on the Pacific Rim trade deal she once embraced, now opposing it under political pressure from her party's extreme left wing.

Not too long ago, she praised the 12-nation pact to sell a lot more U.S.-made goods abroad as the "gold standard" of trade agreements. But once she saw her socialist rivals gaining on her, she turned against it.

Is there any policy or principle Clinton truly believes in and won't switch sides under political pressure? Is that the kind of president we want running America -- changing her mind when it suits her politically, regardless of what's good for our economy and the American people?

Faced with a beating in the Democratic presidential primaries, and fearing union bosses and other special interests, she caved in a New York minute.

"As of today, I am not in favor of what I have learned about it," Clinton said. What has she learned about it, and from whom? The text of the deal just came out Monday. Her polling numbers have been declining for weeks, and her numbers have been shrinking as Vermont Sen. Bernie Sanders, a self-described socialist, has been making the trade agreement a central issue in his campaign.

Understandably, her fellow Democrats and others are accusing her of shameful political expediency.

"Wow, that's a reversal," said former Democratic Gov. Martin O'Malley, who taxed Maryland into the ground and wants to do the same thing to the country. "I was against the Trans-Pacific Partnership months and months ago."

Republicans pounced on her, too. "Hillary Clinton's painful waffling on TPP has been a case study in political expediency and is precisely why an overwhelming majority of Americans don't trust her," said Republican National Committee Chairman Reince Priebus.

"I'm glad she reached that conclusion," Sanders said, but added, "I'll let the American people determine who has credibility or not."

A thorough search of her record on the issue will find precious little of that.

It was Clinton, as secretary of state, who laid out the administration's "pivot to Asia" strategy to expand trade with Pacific Rim nations in a cover essay in Foreign Policy magazine in October 2011.

"Our hope is that a TPP agreement with high standards can serve as a benchmark for future agreements -- and grow to serve as a platform for broader regional interaction and eventually a free trade area of the Asia-Pacific," she wrote.

But President Obama was shocked to learn that she had begun to waffle on the issue, after the White House asked Congress to pass "fast track" authority on the trade deal.

Then, in June, she broke with the administration on that issue, saying she was standing with House Democrats who were opposing Obama's trade agenda. With Minority Leader Nancy Pelosi and her rank and file in rebellion against any trade deal, Obama won only 28 out of his party's 188 House Democrats.

It was not only a sharp break with the White House, it was a flat-out rejection of her husband's support for free trade pacts.

President Reagan started the ball rolling by enacting part one of the North American Free Trade Agreement with Canada, our largest trading partner.

Then Bill Clinton got the rest of the trade pact with Mexico through Congress in 1993, calling it a major plank in his economic growth agenda.

Labor union leaders and Democratic lawmakers said it would steal jobs from Americans and hurt our economy. In fact, just the opposite happened: In his second term, after Bill Clinton signed a GOP-passed capital gains tax cut, the unemployment rate plunged to around 4 percent and the economy soared.

None of this happened by accident. In the mid-1980s, a nationwide organization was begun by a group of pro-business, pro-trade Democrats headed by Al From and Will Marshall. They called themselves the Democratic Leadership Council, hired a crew of policy specialists, and held annual conventions to hear from like-minded lawmakers like Georgia Sen. Sam Nunn -- and an up-and-coming governor from Arkansas, Bill Clinton, who became its chairman.

They churned out scholarly papers championing free trade and other pro-investment, pro-job, pro-new business creation. It lit a fire among party moderates, businesses, entrepreneurs and free-market activists who had rejected the Democrats' socialist-leaning ideas.

Bill Clinton toured the country on their behalf, promoted their ideas and rode the DLC's pro-growth agenda all the way to the White House.

But there was one person in the White House at that time who didn't like the DLC's agenda: first lady Hillary Clinton.

"She didn't like our positions on business, trade and other policies," a top DLC official told me. "We considered her the 'enemy in the White House' who was opposed to everything we were trying to do."

Sadly, the DLC no longer exists, driven into extinction by a growing mob of ultra-leftist, tax-us-into-oblivion demagogues.

Democratic audiences around the country are cheering Bernie Sanders, whose entire economic agenda calls for getting rid of billionaires and millionaires, and anyone else with too much money.

John F. Kennedy's across-the-board tax cuts are viewed with disdain by a later generation, as is his 1960 campaign declaration that "a rising tide lifts all boats."

Just suggest cutting taxes at a Democratic gathering nowadays to "get America moving again," and you'll get booed, or worse.