From "Dead Broke" To Making Millions, With A Little Help From Bill And Hillary's Global Friends 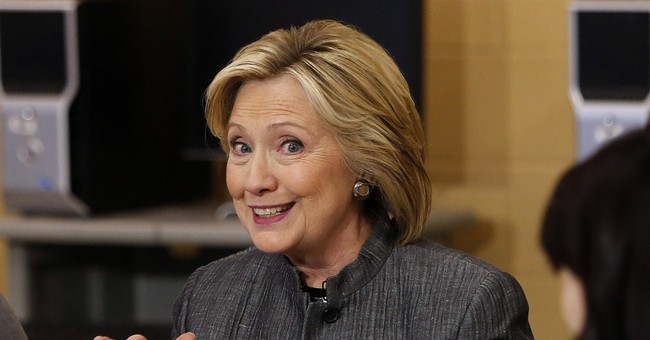 As the clear front-runner for her party's nomination, she is hampered by President Obama's unpopularity and a sour mood among a large majority of Americans about the direction of the country.

Getting elected president is hard enough, but following an inept administration, in which she was a central figure with her own set of scandals, is a high hurdle indeed.

Clinton's role in the administration, and questions about what if anything she accomplished in that job, are already being raised by Republican contenders in preparation for the 2016 campaign.

A preview of the GOP's attack strategy came Sunday when Florida Sen. Marco Rubio, who has announced his candidacy, told CBS's Face the Nation:

"I believe a Clinton presidency would basically be another four years of Barack Obama," adding that "We cannot ignore that she was secretary of state during the first four years of the Obama presidency and has virtually no meaningful achievements to show for it."

For a long time now, Obama's job approval polls have been stuck in the mid 40 percent range, with 51 percent of Americans disapproving of the job he is doing, according to the Gallup Poll.

Equally challenging for Clinton is the voters' sour mood about the country's direction under Obama's policies.

This week, based on nearly half a dozen major polls, Real Clear Politics reported that more than 60 percent of Americans say America was on the wrong track. Just 30 percent say it is moving in the right direction.

Clinton faces further challenges on yet another pivotal measurement: the deep financial hardships Americans are experiencing under Obama's presidency.

"Americans' Money Worries Unchanged From 2014," said the headline over a Gallup story Monday, reporting that, "Half of Americans have substantial financial anxiety," and "Lacking money for retirement remains top financial worry."

In an uneven, below-par, still-anemic economy where incomes remained flat, it's not surprising that "60 percent of Americans say they are 'very' or 'moderately' worried about" having enough to live on when they can no longer work.

"Not being able to afford medical costs associated with a serious illness or accident also ranks high at 55 percent," Gallup said.

Nearly half "worry about maintaining their standard of living or paying for normal healthcare," the survey found.

Close to "four in 10 U.S. adults worry about not having enough to pay their normal monthly bills, or being able to pay their rent or mortgage."

While, 46 percent of Americans polled described their finances as "excellent" or "good," Gallup said that figure "falls below the 51 percent to 57 percent range" during the pre-recession years under President George W. Bush.

As for all the apologists we see on the network news shows who say the president has pulled the economy out of the recession, the survey reveals that many Americans have been left way behind.

"Americans' current levels of worry about seven fundamental indicators of financial health suggest they have still not fully recovered from the recession," Gallup said.

Its latest survey shows that "Americans remain more worried than they were in the years preceding" the Great Recession.

What are Clinton's solutions to the economic troubles that worry many millions of Americans? So far she hasn't given us a clue.

Poll show the economy and jobs remain the biggest concerns among many Americans. But this past weekend Clinton was in Iowa talking about campaign finance which she called a "dysfunctional political system."

She also talked vaguely about dealing with regulations that stand in the way of new small business creation. But that is a problem caused by excessive taxation and weak capital investment, issues that she refuses to touch.

Meantime, a new book that's coming out next month suggests there could be yet another scandal lurking in Bill and Hillary Clinton's global foundation.

The salacious details are contained in "Clinton Cash: The Untold Story of How and Why Foreign Governments and Businesses Helped Make Bill and Hillary Rich," by Peter Schweizer.

The New York Times, which obtained an advance copy, reported Sunday that the book "asserts that foreign entities who made payments to the Clinton Foundation and to Mr. Clinton through high speaking fees received favors from Mrs. Clinton's State Department in return."

"We will see a pattern of financial transactions involving the Clintons that occurred contemporaneous with favorable U.S. policy decisions benefiting those providing the funds." Schweizer writes.

Its many disclosures include "more than $1 million in payments to Mr. Clinton by a Canadian bank and major shareholder in the Keystone XL oil pipeline around the time the project was being debated in the State Department," the Times reported.

Mrs. Clinton said that when they left the White House, the couple was "dead broke," but Schweizer writes, "From 2001 to 2012, the Clintons' income was at least $136.5 million," the Times reported.

The Clinton gang hopes to dismiss this book as another trashy "hit job." But it is being issued by a respected New York publisher, HarperCollins, and will be "potentially more unsettling, both because of its focused reporting" and because major news organizations have agreements "to pursue the story lines found in the book," the Times said.

Is this the political scandal that will bring down Hillary Clinton? Stay tuned.