Pulling Back From The Nuclear Brink 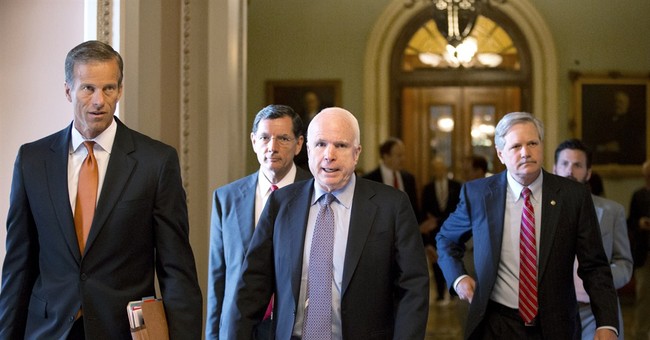 Senate Majority Leader Harry Reid, sounding like a whining kid on a playground who can't get his way, said "the Senate is broken and needs to be fixed."

By "fixed," Reid really meant rigged in favor of his party.

The Nevada Democrat, whose state (with 9.5 percent unemployment) represents the epitome President Obama's failed economic policies, proposed changing the rules of the game this week so he and his cohorts will be able to run roughshod over the democratic rights of the minority whenever they wanted.

Reid's threatened rules change is known as the "nuclear option," that Republican leaders said was the equivalent of telling their party to "sit down and shut up."

Senate Minority Leader Mitch McConnell of Kentucky, always protective of his party's rights under the chamber's long-held parliamentary rules, said that if Reid ever got his way, it would be "a sad, sad day for the United States. And if we don't pull back from the brink here, my friend, the majority leader, is going to be remembered as the worst leader in the Senate ever."

Well, it was, shall we say, a testy exchange between the two leaders over an issue that pops up every now and then in the Senate, only to pull back from the brink in the end. And that's what happened Tuesday.

Both sides were in negotiations, led by Arizona John McCain, to find a way around the impasse, after a closed door meeting of nearly all 100 senators in the Old Senate Chamber used in the 1800s.

At issue were seven of Obama's nominees whose nominations were either being held up by GOP senators or constitutionally challenged because they were recess appointments. Among them:

-- Richard Cordray to head the Consumer Financial Protection Bureau, the new federal bureaucracy that Republicans want to change or abolish. An appeals court ruled in January that Obama's appointments of Cordray and two members at the National Labor Relations Board were unconstitutional because the Senate was technically not in recess. The Supreme Court will review the cases this fall.

-- Fred Hochberg, picked to head the Export-Import Bank, was being blocked by GOP senators who oppose his nomination because they object to the agency that funnels huge subsidies to some of the richest Fortune 500 corporations in the nation.

-- Gina McCarthy, who was nominated in March to head the Environmental Protection Agency, was being blocked by some Republicans who oppose many of EPA's policies and her positions on them.

Unlike the House, where the leadership decides what legislation will be brought to the floor and the rules under which it will be considered, the Senate operates by and large on unanimous consent. One or more members can block legislation or nominations by a filibuster which takes 60 votes to overcome.

Under increasing pressure from the White House, Reid threatened to change the rules to allow a simple majority vote to act on all Presidential nominations. With a 54-to-46 Democrat majority, the rights of the minority for extended debate and examination of a nominee's background and positions would be lost.

But that change, if it were made, could come back to bite the Democrats in future Congresses.

"I think there's enough recognition on both sides that the shoe can be on the other foot rather quickly and that people in the majority today will be in the minority tomorrow, and vice versa." said Texas Sen. John Cornyn, the GOP's second-ranking Republican.

The Constitution that governs the way Congress works merely says the President "shall have power, by and with the advice and consent of the Senate" to nominate officials in the government. It can offer it or withhold it.

It also gives each house of Congress the sole power "to determine the rules of its proceedings..." We are governed by majority rule, but also with the proviso that the minority in Congress has certain rights to guard against the tyranny of the majority.

There's a long history of political battles over the rules that govern the minority's rights in Congress, but the news media sometimes exaggerates the tenor and tone of these disputes.

"The U.S. Senate, once considered the most exclusive and chummy club in America, has in recent years been transformed into an ideological war zone, where comity and compromise have lost their allure," the Post said.

In fact, the fights being waged today are nothing like the legislative donnybrooks that took place in the old days when there were fist fights, duels and worse.

In Doris Kearns Goodwin's brilliant book Team of Rivals, about Abraham Lincoln's presidency during the Civil War, she tells of Delaware Sen. Willard Saulbury's gun-wielding "liquor-fueled harangue" against Lincoln, calling him "an imbecile," among other things.

"Called to order by Vice President Hamlin, he refused to take his seat. When the sergeant at arms approached to take Saulsbury into custody, he pulled out his revolver. 'Damn you,' he said, pointing the pistol at the sergeant's head, 'if you touch me I'll shoot you dead." The wild scene continued for some time before Saulsbury was removed from the Senate floor."

That was mild compared to the day South Carolina Rep. Preston Brooks walked into the Senate with a heavy cane and savagely bludgeoned Massachusetts Sen. Charles Sumner over his anti-slavery speech, nearly killing him.

Despite all of Congress's institutional failings and its inability to come to grips with the overwhelming economic and social ills that afflict our country, Capitol Hill is a far more civil place than in years long past.

It remains polarized because of deep ideological beliefs on both sides of the aisle, a chief executive who is in over his head and cannot lead, and a divided electorate -- one that wants a lot more government and the other that wants a lot less.

This week, however, the two sides came together in a compromise that avoided the nuclear trigger. No one got everything they wanted, but everyone lived to fight another day.