Obama's Fiscal Task Force Has Too Much to Handle 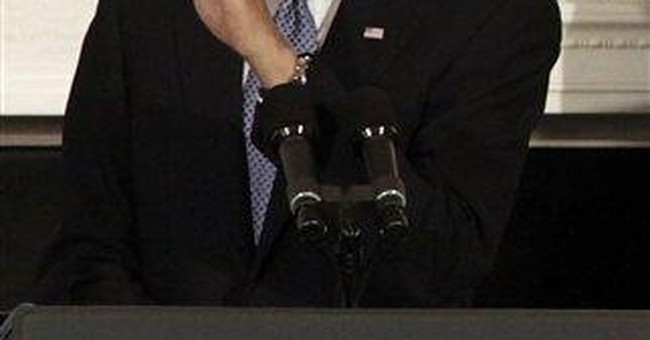 WASHINGTON -- When presidents can't make the tough decisions on the vexing problems that confront government, they pass the buck by appointing a commission to come up with some answers.

That's what President Obama did with his executive order to create a bipartisan task force to cut the budget deficit, which is expected to hit $1.6 trillion this year and can only be expected to rise under his spending policies.

The president is essentially admitting he can't stop his spending addiction and needs counseling from one of those debt-resolution services people use when they have maxed out their credit cards. His task force is doomed to fail for a number of reasons.

First and foremost, Congress is under no obligation to accept any of its proposals and probably won't. Democrats pushed legislation to set up a similar congressionally mandated commission, but the bill failed to draw necessary support when a group of Republican senators turned against it, discovering that the panel would attempt to cut the deficit by raising taxes on what remains an anemic economy still struggling to recover. That was a nonstarter.

Polls show that a majority of American people are deeply troubled by the massive pileup in debts by this administration and this Congress, and want deficit reduction to be a major priority. But the Democratic majority is seemingly incapable of saying no to more spending. The pending health care bill, tipping the scales at $1 trillion, is the latest manifestation of this.

Second, the Constitution gives Congress sole power over the federal government's spending levels. No outside, unelected body is going to be able to step into the breach to do what the president and the majority party in Congress refuse to do: slow down the growth in federal spending while the economy gets back on its feet and tax revenues begin rising again as a result of sustained increases in the nation's economic growth.

When Obama's proposed task force plan foundered on Capitol Hill for lack of support, he set up one of his own. It was a stunning admission of his own inabilities to exert executive leadership over the federal budget. And it didn't exactly win rave reviews.

"President Obama's budget deficit task force is clever politics but poor leadership. Instead of drafting a responsible budget, he seeks to force Republicans to endorse wasteful spending and higher taxes, or be cast as obstructionists," writes University of Maryland economist Peter Morici in a recent critique of Obama's budgetary shell game.

It's worth noting that the deficit under former President Bush, who Morici notes was "no model of austerity," fell in fiscal 2007 to a mere $161 billion from over $400 billion, just before federal tax revenues plunged as a result of the Great Recession.

When he unveiled his fiscal 2011 budget, the news media made much of his proposed freeze on non-defense discretionary spending. But it was delayed until next year at the earliest and in the end, wouldn't make even a dent in the deficit -- maybe $25 billion -- if Congress accepts his proposals.

Obama isn't into budget cutting. He's into budget growing, and he's made this clear many times when he tells Americans that this or that big spending plan is "paid for." What he means is that he will raise taxes to bring in more revenue to spend and eventually that means higher taxes on the middle class.

That's what he expects from this presidential commission, and he emphasized it earlier this month in an interview with Bloomberg BusinessWeek.

"The whole point of it is to make sure that all ideas are on the table" and that every option is considered, including tax increases, he said.

In the end, whatever Obama's task force comes up with, it's going to run into a fiscal brick wall called weak economic growth, which means lower tax revenue receipts, which in turn means higher deficits than are presently forecast.

The administration assumes GDP growth of about 3 percent this year and 4 percent after that in its projections of slightly lower deficits by mid-decade. But the Congressional Budget Office projects very tepid growth rates of less than 2 percent. "Most economists believe Obama's growth economic assumptions are too optimistic and deficits will be bigger than projected," Morici says.

They will indeed, until we curb spending and give the U.S. economy a permanent transfusion of lower tax rates to fuel business expansion and new job growth. That will restore solvency to the government and needed long-term growth to our economy.