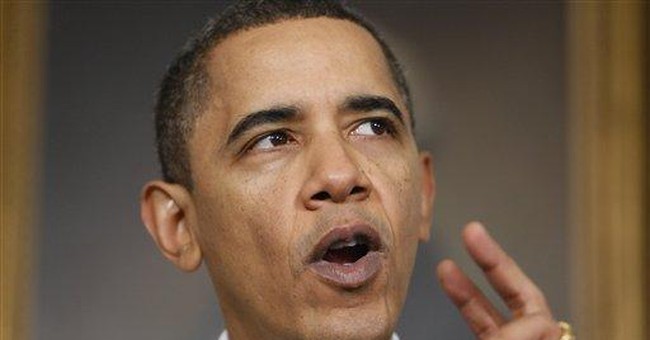 The talking points coming out of the White House said that the spending binge, whose real cost is now about $900 billion (counting interest on the debt it incurred), saved the economy from a depression and that it was responsible for creating or preserving 2 million jobs. The preservation part is largely concentrated in state and local government programs that say they would have laid off workers if not for the federal money they received.

But many economic analysts and groups who have been monitoring all of this spending for waste, fraud or abuse either question the veracity of these numbers or maintain that there is no truly objective way to verify how many jobs have been truly saved.

The nightly news reports tended to give the White House's claims the benefit of the doubt and expressed little if any skepticism about Obama's claim that all of this spending, much of it in large part for non-job-creation safety-net programs, somehow averted a depression and turned the U.S. economy around. That's more credit than they deserve.

For one thing, the Great Recession officially began near the end of 2007, and the economy is said to have begun expanding last summer, several months or so after the spending stimulus was enacted and just getting started. It's hard to believe the Obama stimulus, which by that time had pumped relatively little money into the economy's pipeline, had much if any stimulative effect at all.

Something else was helping the economy get back on its feet, and most economic analysts think that was the Federal Reserve's near-zero interest rates and other heavy-duty actions to shore up the economy and stop the financial system's hemorrhaging.

The economy has lost 8.4 million jobs since December 2007 when the national unemployment rate was a low 5 percent. As of last month, it was losing another 20,000 more jobs. The annualized jobless rate fell to 9.7 percent only because thousands of discouraged, jobless Americans stopped looking for work and were not counted as unemployed. Add them into the equation, plus millions only working part time, and the rate of unemployment is 17 percent or more.

In other words, in the most fundamental measurement of whether the stimulus plan is actually jump-starting the American Jobs Machine, the numbers suggest that at best job growth this year has been tepid and will remain so for several years or more.

Who says so? This month's annual Economic Report of the President. In its review of the report's forecasts, The Washington Post reported: "The economy is projected to add jobs this year at a pace too sluggish to make much of a dent in unemployment," adding that Obama's economic advisers "expect the jobless problem to be a fact of life throughout his term."

For some reason, this report never found its way into any of last week's nightly news reports about all the credit the White House thinks it deserved for its stimulus program.

The president's report said the economy would add an average of 95,000 jobs a month this year. That is a rate of job creation that would not even keep up with population growth.

To put this anemic monthly jobs estimate in sharper perspective, the economy was creating 200,000 to 300,000 jobs or more per month in the last half of the 1980s when the country was barreling out of a deep, two-year recession thanks to the pro-growth, across-the-board tax cuts implemented under President Reagan. There was a referendum on those stimulus policies in 1984, and Reagan carried 49 states.

If there were a re-election referendum on Obama's economic policies today, he would lose. A recent Washington Post-ABC News poll finds that only 45 percent of Americans agree that the economy is recovering.

There are a number of macroeconomic problems with Obama's pump-priming economic-stimulus spending plan that didn't create many full-time, permanent private-sector jobs last year and, according to the White House own forecasts, won't be making much of a dent in this year's jobs picture, either.

The biggest problem is that its spending plans are unsustainable. The spending (money taken out of a weak economy) will dwindle by the end of the year, and the funding for those state and local government jobs will end. Trillion-dollar-plus deficits will make more spending problematic at best.

What the economy's anemic, capital-starved circulatory system needs is a self-sustaining intravenous feeding of lower tax rates for all businesses. Until we do that, the economy is in for a long, painfully slow rate of mediocre growth and persistently high unemployment for as far as the eye can see.