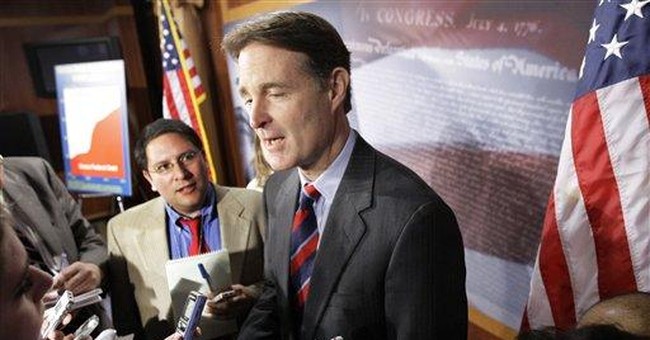 WASHINGTON -- If you want further evidence of how deep Democratic losses may be in the fall midterm elections, Indiana Sen. Evan Bayh's suddenly shaky bid for a third term is exhibit A.

A few months ago, Bayh was considered a shoo-in for re-election in the Hoosier State, but top election handicappers have now moved his chances from "safe" to "endangered."

Within hours of former Indiana Sen. Dan Coats' announcement Wednesday that he is considering challenging Bayh in November, the political dynamics of the race changed dramatically. The conservative Republican's "likely entry into the Indiana Senate race puts another seat into play" for the GOP, said election forecaster Stuart Rothenberg.

"Move from Currently Safe to Narrow Advantage for the Incumbent Party," he said in his widely read Rothenberg Political Report this week.

But the senator's "narrow advantage" may be precarious at best, according to recent polls that show growing disapproval of the two-term senator who once had presidential ambitions.

Despite Bayh's once carefully cultivated image as a party moderate, he has lurched left under the rhetorical spell of Barack Obama's presidency and the pressures of a largely liberal Democratic caucus in the Senate.

He voted for the $2.5 trillion Obamacare bill, despite strong opposition back home where polls showed 60 percent opposition to the healthcare plan. He backed Obama's $800 billion-plus economic-stimulus bill that has failed to create the 3.5 million jobs he promised. He supported Obama's unpopular move to remove terrorist prisoners from Guantanamo Bay and try them in civilian courts because the American Civil Liberties Union said they should be afforded the constitutional rights available to all American citizens.

This was not the sensible moderate Evan Bayh, who once chaired the centrist-leaning Democratic Leadership Council that had declared war on the liberal wing of his party. He was breaking with his state's right-of-center political traditions, and Indiana voters are now breaking away from him.

A Rasmussen statewide poll of likely voters released Jan. 25 showed him trailing Rep. Mike Pence, the House Republican Conference chairman, by 47 percent to 44 percent. Pence, however, has decided to remain in his leadership post. A matchup with GOP Rep. John Hostettler was a virtual dead heat.

More troubling, Rasmussen found that only 23 percent of likely Indiana voters had a "very favorable" impression of Bayh, while more than 40 percent had either a very or somewhat unfavorable view or were unsure.

But the political wake-up call, apparently, didn't hit him until Republican Scott Brown won Ted Kennedy's seat in Massachusetts with a campaign agenda of lower taxes, reduced spending and a "no" vote on Obamacare.

Suddenly, Bayh was issuing fire-breathing denunciations of his party's left wing, calling on Democrats to reset their agenda and backing away from some of his previous positions.

Democrats had pushed their agenda too far to the left, driving away independents and moderate voters, Bayh said. "Whenever you have just the furthest left elements of the Democratic Party attempting to impose their will on the rest of the country, that's not going to work too well."

The lesson to be learned from Massachusetts is that independents and middle-of-the-roaders "just don't believe the answers we are currently proposing are solving their problems. That's something that has to be corrected," the shaken Indiana senator told ABC News.

Now Bayh is attempting to politically rehabilitate himself, even to the point of trying to scrub his own leftist votes from his record.

To wit, there he was on "Fox News Sunday," telling Chris Wallace that he no longer would support trying terrorists in federal courts.

"So you would not support $200 million to cities for civilian trials in federal court?" Wallace asked him.

Bayh: "No. If there's somewhere we can try them without spending that money, why spend the money? We've got a lot of other fiscal problems."

But last November, he voted with his Democratic colleagues against a bill that would have prohibited any federal funds being used to prosecute anyone involved in the terrorist attacks on Sept. 11, 2001, in federal civilian courtrooms.

"No amount of political posturing can change the fact that Bayh voted for his party's foolish attempt to try terrorist killers in American cities -- a terribly misguided plan that was overwhelmingly rejected by voters in Scott Brown's recent victory in Massachusetts," the National Republican Senatorial Committee said in a campaign broadside this week.

Coats' presumed entry into the race is another big recruiting victory for NRSC Chairman John Cornyn, who now has a lot more reasons to think that a bigger political wave is building against the Democrats and rapidly expanding his list of potential upsets.

Coats, a four-term congressman, former senator and an ambassador to Germany, "is a credible alternative for voters who are dissatisfied with the direction of the country and the party in power," Rothenberg said.

But he is starting late, has yet to get his fundraising going, and faces an incumbent with $13 million in the bank who has won many statewide races, including two terms as governor.

On the other hand, Bayh also has a long voting record that supported Harry Reid and Barack Obama, and that in the end may be more than enough to beat him.