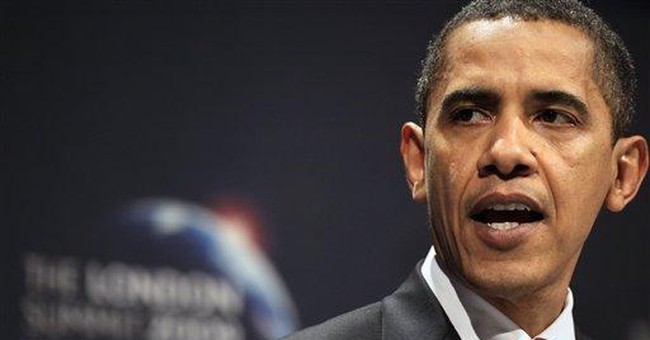 WASHINGTON -- I recently predicted that President Obama's cap-and-trade energy taxes would be the first casualty of his ambitious legislative agenda.

A bipartisan group of Senate Democrats and Republicans drove the first nail into its coffin by adding an amendment to the pending budget resolution. The amendment will deny carbon-emissions-tax supporters the use of a fast-track budget reconciliation rule to limit debate and pass their tax scheme by a simple majority, skirting the tougher 60-vote hurdle to end debate and quickly move to consideration of the measure.

Senate Democratic leaders do not have the 60 votes to bring cap-and-trade to an up-or-down vote. And even if they had 60 members of their party in the Senate, they would lose many, if not most, Midwestern and Gulf State Democrats who fear that Al Gore's so-called climate-change tax scheme on all carbon emissions would be the death knell of their states' oil- and gas-powered economies.

Wednesday's vote on an amendment by Nebraska Republican Sen. Mike Johanns was a major setback for the White House and top Democratic leaders in Congress. Twenty-six Democrats joined 41 Republicans in the 67-31 vote to insert the amendment into the budget resolution.

"It is gradually dawning on Washington that cap-and-trade legislation won't pass anytime soon -- certainly not this year, and probably not next year either," Galston wrote in a blog last month that was widely read on Capitol Hill and in the White House.

But cap-and-trade is still alive and breathing in the House, where liberal Democratic Reps. Henry Waxman of California and Edward Markey of Massachusetts unveiled their 648-page bill last week for rationing energy use in the United States.

Lawmakers in both parties were aghast when they read the bill's fine print. "The Democrats' ruse of an energy plan is nothing more than a regressive tax being offered when families, small businesses and farmers ... can least afford it," said GOP Rep. Roy Blunt of Missouri.

"Their proposal will cost any family that turns on a light switch, drives a car, plugs in an appliance, or purchases an American-made item an extra $3,100 a year," he said.

The Waxman-Markey bill would be especially damaging to Blunt's home state where, he said, "almost 90 percent of electricity is coal-generated."

A Massachusetts Institute of Technology analysis of a less-intrusive cap-and-trade plan estimated it would cost about $3,128 per household nationally.

"Waxman and Markey blithely set targets for reducing greenhouse-gas emissions without any serious analysis or even awareness of the colossal costs of energy rationing to American consumers, workers and industry," said Myron Ebell, director of energy and global-warming policy at the Competitive Enterprise Institute (CEI).

"Beyond these enormous economic costs, Waxman-Markey would put big government in charge of how much energy people can use. It would be the biggest government intervention in people's lives since the Second World War, which was the last time people had to have rationing coupons in order to buy a gallon of gas," Ebell wrote in a CEI analysis of the bill.

But the deep damage Obama's cap-and-trade plan would inflict on our economy goes beyond its draconian carbon taxes. Now we learn that the plan could likely start a trade war.

"The bill as drafted clears the way for carbon protectionism," said CEI senior fellow Iain Murray. "It envisages 'rebates' to companies that have to pay higher costs than their international competitors, which amounts to illegal state aid under World Trade Organization rules."

Last month, Energy Secretary Steven Chu told a House panel that the United States would likely have to raise trade tariffs on carbon-intensive imports as a "weapon" to protect American businesses to "level the playing field" with countries that do not impose similar greenhouse-gas restrictions that the Obama administration envisions here.

"If other countries don't impose a cost on carbon, then we will be at a disadvantage ... (and) we would look at considering perhaps duties that would offset that cost," Chu testified.

That provoked an immediate counter-threat from Li Gao, a top Chinese trade official, who told the Dow Jones news service that a carbon tariff would be a "disaster" that would lead to a trade war.

Obama already appears to have precipitated a trade war with Mexico, which announced it is raising tariffs on $2.4 billion of our exports to their country in retaliation to the administration's latest restrictions on Mexican trucking access to U.S. roads.

"Taken together, these provisions (in the cap-and-trade bill) represent the first shot in what is likely to prove a disastrous carbon trade war," CEI's Murray said.

Meanwhile, if the Johanns amendment survives in the budget resolution, which must be reconciled with the House version, cap-and-trade is all but dead in the Senate. Stay tuned.