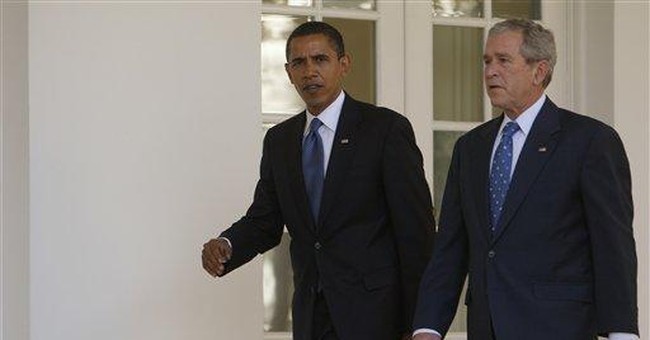 Ronald Reagan's legacy is being kept very much alive here at a time when Republicans have lost their way and are looking for a new voice to lead them out of the political wilderness.

The richly detailed testament Reagan left behind in his archives and writings, much of it still unknown to the public at large, is being uncovered, re-examined, recorded, studied and preserved at the Hoover Institution, the venerable think tank where many Reaganites of that age continue to work, breathing new life into his legacy for future generations. Much of that work is being done in the lofty Hoover Tower that stands in the middle of Stanford University's sprawling, bucolic campus, where former Reagan adviser Martin Anderson and his wife, Annelise, have been the faithful chroniclers in chief of the late president's life and times.

Their detective work began with the extraordinary discovery of boxes full of hundreds of legal-pad pages of radio commentaries handwritten by Reagan in the 1970s that dealt with everything from nuclear arms to farm subsidies to the free-enterprise system.

"In His Own Hand" revealed the former president's well-stocked mind and intellectual curiosity -- far from the media-mythology that portrayed him as a dunce who didn't know much. A map of the country in Anderson's suite of offices has colored pins all over it, showing the hundreds of radio stations that regularly broadcast Reagan's five-day-a-week, five-minute commentaries that made him a well-known radio voice across the country long before the Washington media elite caught on to what was about to change the face of American politics.

Then came "A Life in Letters," a fascinating documentation of his highly disciplined habit of writing thousands of letters over his career, detailing his views on a wealth of issues and ideas through a copious exchange of correspondence with the high and the mighty and the ordinary John Q. Citizen. The Reagan letters that have since surfaced now stand at about 10,000 and counting.

That was followed by the publication of Reagan's White House diaries, which he penned meticulously at the end of each day, recording his daily thoughts, triumphs, defeats, crises and disappointments, seasoned liberally with his undiminished good humor.

Now word is seeping out that the Andersons will be coming out with yet another blockbuster book on Reagan's presidency sometime early next year, this one dealing with his handling of the nation's foreign policy during the Cold War that eventually led to the dismantlement of the Evil Empire.

Mr. Anderson, who has been working on the book for seven years, declined to talk about what their meticulous research discovered. But the buzz in knowledgeable circles is that it will reveal how the Gipper shaped and steered the nation's national security apparatus throughout the eight years of his presidency.

It has been two decades since Reagan left the White House at the peak of his popularity, but his influence is still very much with us today.

Early in his campaign for the presidency, Barack Obama gave a speech in which he talked of political figures he most admired. One of them, he said, was Reagan. He called him a "transformational" leader who had appealed to the nation's hopes instead of its fears, and lifted up a dispirited nation with his optimism for the future. Last week, pollster Scott Rasmussen wrote an op-ed in the Wall Street Journal titled "The Polls Show That Reaganism Is Not Dead."

"Barack Obama won the White House by campaigning against an unpopular incumbent in a time of economic anxiety and lingering foreign policy concerns," Rasmussen wrote. "He offered voters an upbeat message, praised the nation as a land of opportunity, promised tax cuts to just about everyone, and overcame doubts about his experience with a strong performance in the presidential debates."

"Does this sound familiar? It should. Mr. Obama followed the approach that worked for Ronald Reagan," he said. Well, up to a point. Unlike Obama, Reagan would never propose raising taxes on anyone in a recession when the nation needs all the economy's cylinders running at full throttle. And at his very first 1980 general election campaign event near the Statue of Liberty, he outlined his vision for what became the North American Free Trade Agreement -- a pact Obama wants to dismantle.

But like the former president he so admires, Obama exuded a sense of self-confidence and optimism in his campaign and talked often about his belief in America's can-do spirit and enduring goodness.

One of the polling questions Rasmussen asked voters on Oct. 2 found that 59 percent still agreed with the belief expressed by Reagan in his first inaugural address: "Government is not the solution to our problem; government is the problem."

Notably, his poll also found that 44 percent of Obama's supporters "agree with Reagan's assessment." Now Reagan's party is leaderless and in disarray, looking for someone to rekindle that same spirit of optimism and transformational leadership. So far, there seems to be no one like that in sight.