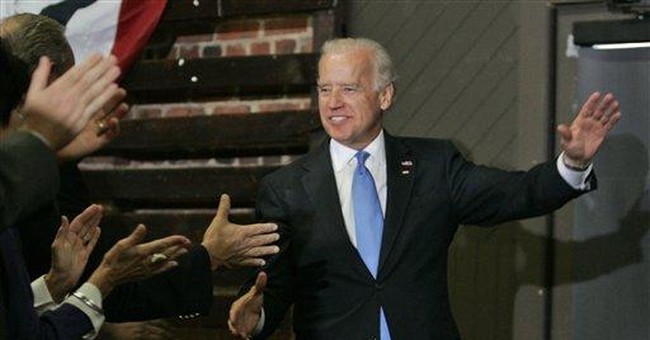 WASHINGTON -- The Democratic nominee for vice president uttered a rare bit of campaign candor the other day when he told us what we should expect in the first six months of Barack Obama's presidency -- an international crisis.

Specifically, Biden seemed to suggest, this crisis will be born out of how Obama will likely be perceived by our enemies abroad: as an untested and sorely inexperienced freshman lawmaker who has made strategic errors in judgment in foreign-policy crises before.

It's hard to conceive that the Delaware Democrat, famous for putting his foot in his mouth, meant it the way it came out. It's harder, still, to think that Obama was thrilled with what his running mate was suggesting -- that his tissue-thin experience in international statecraft would result in serious unintended consequences for our country and our allies.

"Mark my words," Biden said at a Seattle, Wash., fundraiser. "It will not be six months before the world tests Barack Obama like they did John Kennedy. The world is looking. We're about to elect a brilliant 47-year-old senator president of the United States of America.

"Remember I said it standing here, if you don't remember anything else I said. Watch, we're going to have an international crisis, a generated crisis, to test the mettle of this guy," Biden said.

Just about every chief executive in one way or another is tested by an event or crisis during his presidency, some more than others. But what exactly did Biden have in mind when he said that the world would test Obama "like they did John Kennedy"? To those who remember their history, it is not necessarily a flattering comparison.

Clearly, Biden was talking about Nikita Khrushchev's impression of Kennedy as a lightweight who was not ready to engage in the rough-and-tumble world of dictators and despots, someone who would back down if, for example, the Soviet Union put nuclear weapons in Cuba.

The test came after a deeply humiliating confrontation Kennedy had with Khrushchev at the 1961 Vienna summit -- not unlike the summit meetings Obama has said he would willingly attend with some of the world's most brutal dictators.

As author Richard J. Whalen recounted in his definitive biography of "The Founding Father: The Story of Joseph P. Kennedy," "Before the Vienna summit, (Kennedy's only face-to-face meeting with Khrushchev), Kennedy told an aide: 'I have to show him I can be just as tough as he is.' He failed.

"According to his aide, Fyodor Burlatsky, Khrushchev thought Kennedy 'had more the look of an adviser, not a political decision-maker or a president.'"

Khrushchev, "determined to intimidate an adversary whose nerve he doubted, upped the stakes." He gave the East Germans the go-ahead to build the Berlin Wall, then -- after Kennedy did nothing -- he upped the ante again by introducing strategic nuclear missiles 90 miles from our shores, believing Kennedy would back down -- something he never would have dared to do with Dwight Eisenhower, who built the nuclear arsenal that kept the Soviets at bay. Ike didn't need testing.

In the end, of course, Kennedy didn't back down, but he brought the United States to the brink of nuclear war -- all because he was seen as someone who could be pushed around and who didn't lay down clear foreign-policy markers until the missiles had been installed.

Kennedy, wrote historian Michael Beschloss, "had not warned against them until it was too late."

This is the kind of crisis scenario that Biden seemed to be referring to when he told the Democratic fundraiser that Barack Obama would be tested just as Kennedy was tested. It was a chilling comparison fraught with high-risk implications for an Obama presidency.

National-security and foreign-policy issues have taken a back seat in this election as the economy's crisis unfolds, and that has worked in Obama's favor and against John McCain.

But we've seen disturbing examples of Obama's abysmal judgment on foreign-policy issues both before and throughout this campaign.

He condemned the U.S. military surge in Iraq, predicted it would fail and would even make the situation "worse." It succeeded and led to the start of U.S. military withdrawals from Iraq.

When Russia invaded neighboring Georgia, sending warplanes and tanks deep into its sovereign territory, he called on Putin and his gang of Cold War warriors to show "restraint."

When he was challenged in debate with Hillary Clinton about how we should respond to dangerous rogue countries like Iran and North Korea, he said he would talk face to face with their leaders without preconditions. Clinton condemned his position as irresponsible and naive.

We are about to elect a president who will be the most inexperienced chief executive in modern history. Never mind what McCain says about this, listen to Biden who says ominously that Obama will be tested in the first six months in office with a serious international crisis that may endanger our national security, just as Kennedy was. Think about that before you vote.