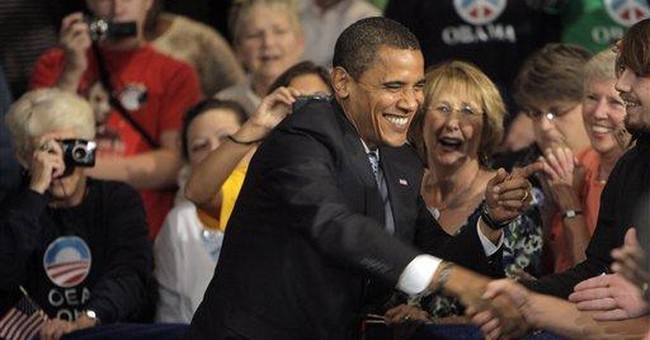 WASHINGTON -- Barack Obama has a disturbing habit of saying things that are not true, such as no one who makes less than $250,000 will pay higher taxes under his tax plans.

He is running saturation ads around the country saying this, but the fact is that lots of people will be paying higher taxes beneath that income level (which will raise the top marginal tax rate from 35 percent to nearly 40 percent). In fact, millions of Americans who now pay no income taxes will get "refundable" checks from the government under his plan (but more on that in a minute).

The liberal senator would raise capital-gains tax rates on the sale of stocks or other assets on the gain in their value when they're sold. That would mean higher taxes on millions of American families preparing for their retirement.

He'd raise taxes on dividends, too, that would impose higher taxes on Americans whose income depends on those hard-earned dividends.

If you run a small business that earns $250,000 or more and you pay taxes on its earnings as an individual taxpayer (though you pay yourself less than that), you will be hit by his higher income tax.

His plan proposes to get rid of a lot of corporate tax "loopholes," which would mean higher taxes that would be passed on to their customers who make a lot less than $250,000.

But the most disingenuous part of his tax plan is his claim that he will give 95 percent of all American workers a "tax cut," because he does not mention that it will mean sending checks to millions of tax filers who pay no personal income taxes.

Critics say that looks "suspiciously like welfare" or income redistribution from wealthier taxpayers to lower-income Americans. But it also raises the question, How can he call it a "tax cut" when its recipients pay no income taxes?

But because he makes it "refundable," he will pay the equivalent amount to those who have no income-tax liability after taking the usual tax credits and deductions in the tax code. Those checks would come from taxes to be paid by higher-income Americans.

The Internal Revenue Service says nearly 46 million tax filers -- one-third of all filers -- had no tax liability in 2006, so you can hardly call this a tax cut because they pay no taxes.

"What he's really talking about doing is mailing a check and, to me, that looks more like a welfare program than the kind of real tax relief that would encourage work, savings and investments," said Phil Kerpen, policy director at Americans for Prosperity, a free-market advocacy group.

Obama claims that almost all workers (95 percent) will benefit from his "tax cuts." But Investor's Business Daily points out that Obama's "'working families' does not include all households. Throw in singles, retirees, students and the unemployed, and the share getting some tax-related benefit is a good deal less."

The Tax Policy Center, a nonpartisan tax-analysis group established by the liberal Urban Institute and the Brookings Institution, dismisses his 95 percent figure, saying that about 80 percent of households would receive a tax cut. Throw in the tens of millions of tax filers who owe no taxes, and the percentage of taxpayers getting real tax cuts falls a lot lower.

The Obama campaign's chief economist Jason Furman told me in an e-mail that "the tens of millions of families working hard and paying payroll taxes do not think that tax cuts are a form of 'welfare' or 'redistribution' -- they think it is only fair to reward work."

Roberton Williams of the Tax Policy Center said "one can argue" that workers who don't pay income taxes "are paying Social Security payroll taxes, and this is a tax cut against that."

But is this just another clever way for Obama to redistribute the nation's income, taking from high-income taxpayers who pay the lion's share of all income taxes and giving it to lower-income workers who pay none?

Williams doesn't dispute this. "You could view it that way because both (tax) proposals are in the same tax plan," he said. "There's no question that's one way to perceive the tax plan." Exactly.

So this is what's at the core of Obama's economic policies -- taking more money from one group of taxpayers and directly transferring it to those in the lower- to middle-income tax brackets who pay little or no income taxes to begin with.

Instead of cutting everyone's taxes to encourage work, investment and savings by enlarging the economic pie, Obama would redivide the pie into smaller slices and redistribute it through the tax system.

This is the Europeanization of the economy that awaits us under an Obama presidency.