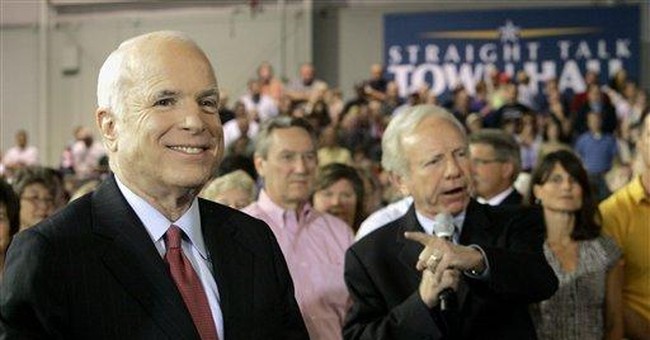 WASHINGTON -- When President Bush first met Russian President Vladimir Putin, he looked into his eyes and said he could trust him.

About the same time, John McCain said, "When I look into his eyes, I see a K, a G and a B" -- the acronym of the Soviet Union's Stalinist secret police for whom torture and murder was a form of recreation.

McCain never trusted Putin. He believed the former KGB agent neither supported nor accepted the independence movement that swept across Eastern Europe when the Evil Empire fell apart and ended up on the ash heap of history. When others were supporting Putin's bid for membership in the exclusive G-8 club of economic powers, McCain opposed it.

Events have proven McCain right from the beginning. Putin has crushed dissent in Russia, dismantled a free press, thrown corporate executives in prison on trumped-up state charges, took control of the country's oil and gas industry, and eliminated anyone who got in his way. Now he appears to be bent on reconstructing the old Soviet Union through military might.

Last week, he sent troops, tanks and bombers into neighboring Georgia (an ancient country seized by the Red Army in 1922) on the preposterous pretext of saving Ossetia, a breakaway province where Georgia's army was attempting to quell a separatist uprising.

Before the weekend was over, Putin had sent Russian forces, bearing the old Soviet Union flag, into the Abkhazia region and then deeper into Georgia, bombing cities and towns (2,000 were killed in South Ossetia alone) and instituting a naval blockade on Georgia's Black Sea coastline.

By Tuesday, Georgian officials feared the Russian army was moving toward Tbilisi, its capital, threatening to topple the government. Then, in a deal being negotiated by French President Nicolas Sarkozy, both sides agreed to pull back their troops, leaving the Russians occupying the two disputed provinces as so-called "peacekeepers" -- an untenable situation that gives Russia de-facto control over sovereign Georgian territory.

There is little doubt now -- if there ever was -- who is running Russia, and it isn't the figurehead President Dmitry Medvedev. Prime Minister Putin has taken control of the military invasion as its commander in chief.

Eastern European countries were left wondering whether they were Russia's next targets. European leaders faced their deadliest crisis since the Cold War. President Bush harshly condemned the attack on the pro-American nation, while administration officials said it marked a return to the days of Soviet-style aggression.

But here at home, all eyes were on McCain and Barack Obama to see how they would respond to the first major foreign-policy crisis of the 2008 presidential election. This was a test of their judgment and foreign-policy acumen. This was the equivalent of the hypothetical 3 a.m. White House phone call that Hillary Clinton raised when she attacked the freshman senator's inexperience.

In the early hours of the crisis, the contrast between how the two men responded couldn't have been sharper.

McCain laid out a preliminary response on Saturday, supporting the United States, European Union and NATO "acting together by sending a delegation to the region to broker a cease-fire." He backed a declaration by Poland, Estonia, Latvia and Lithuania, saying that "aggression against a small country in Europe will not be passed over in silence or with meaningless statements equating the victims with the victimizers."

On Monday, he provided a much more detailed response:

-- NATO's North Atlantic Council should "convene in emergency session to demand a cease-fire" and begin discussions on an international peacekeeping force in South Ossetia.

-- The U.S. Secretary of State should begin high-level talks in Europe for a common Euro-Atlantic posture, plus an emergency meeting with the G-7 foreign ministers.

-- Immediate consultations with Ukraine and other countries in the region to take steps to "secure their continued independence."

Obama, vacationing in Hawaii, was slow on the uptake, issuing a perfunctory statement that sent a signal of impotency in the face of a high-stakes foreign-policy crisis in which two countries were at war with one another in Europe.

"I strongly condemn the outbreak of violence in Georgia and urge an immediate end to armed conflict," he said in a statement. He urged Georgia and Russia "to show restraint" and "avoid an escalation to full-scale war."

But Russia had already taken considerable territory. Events had moved beyond Obama's initial statement during the weekend.

Defense and political analysts expressed disappointment with Obama's slowness to grasp the full range of the crisis, but praised McCain, who had made numerous trips to Georgia, for his understanding of the crisis.

"The Obama campaign has had zero policy prescriptions for dealing with the most serious global crisis since the Iraq war," said Ariel Cohen, senior research fellow in Russian and Eurasian Studies at the Heritage Foundation.

"It made (Obama) look like a deer caught in the headlights. The McCain campaign was way ahead of him by advocating a serious and multilayered global diplomatic response," Cohen told me.

"McCain certainly impresses me with the way he has handled it," said Michael O'Hanlon, a senior defense and foreign-policy analyst at the Brookings Institution.

"It vindicates the somewhat tougher line toward the Russians that he has advocated. McCain is the one who has distinguished himself here," he told me.

If this was the first real foreign-policy test of the presidential campaign, McCain has scored all the points.