Battlegrounds Shift for Obama and McCain 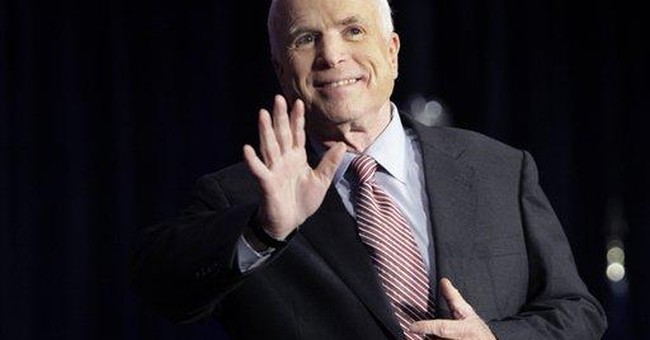 WASHINGTON -- It is always dangerous to make any forecasts about presidential elections based on national polls because we do not choose our chief executives by popular vote.

This week's ABC News/Washington Post poll of 1,125 adult Americans shows a close race between Sen. Barack Obama and Sen. John McCain, 48 percent to 42 percent, and other polls show it closer. But at this point four years ago, Sen. John Kerry led President Bush by the same margin, and we know how that turned out.

So the only prudent way to measure this race is to follow how the two candidates are doing in the states, especially the battlegrounds, keeping a tabulation of the "safe" states and the tossups that will decide who gets 270 electoral votes that will put him over the top.

Right now, it seems that the shape of the electoral map will undergo a few switches from previous elections, but veteran campaign analysts do not expect any sweeping changes in its past composition.

The electoral map's color patterns have become predictably familiar. The GOP's electoral lock, broken only five times in the past 14 elections, can be seen in the large swash of red running from the Canadian border to the Rio Grande in the West's mountain and plains states, across the South and into a handful of Midwestern swing states.

Democrats of late have swept the West Coast, carried the industrial giants in the Midwest and virtually all the Northeast.

This time, though, Obama and McCain strategists talk boldly of making inroads in the other's territory, and both have laundry lists targeting more than a dozen battleground states that could go either way.

"There will be changes, but don't expect the 2008 presidential map to look wildly different from those of 2000 and 2004," said savvy elections analyst Stuart Rothenberg. Barring a McCain meltdown, he wrote in his Roll Call analysis, "only a handful of states are prime candidates to swing from their traditional partisan bent in recent presidential elections."

There are many electoral counts being kept at this early juncture. Some show Obama with a lead, while others show McCain with a narrow edge.

Earlier this month, longtime elections analyst Michael Barone, editor of the Almanac of American Politics, offered a count based on polls and past state performances that showed "McCain leading Obama by 281 to 257 electoral votes." But it came with a cautious proviso that "many states are exceedingly close, including some that were not target states in 2000 or 2004."

Obama strategists think he can pry a number of red states from the GOP column, including New Mexico (5), Colorado (9) and Nevada (5) in the West; Virginia (13), North Carolina (15) and Georgia (15) in the South; and Iowa (7) and Ohio (20) in the Midwest. That would give him an added 89 electoral votes, but he may need only one or two of these states to win the election.

Bush defeated Kerry in 2004 by 286 to 251 electoral votes. If Obama can take the same states as Kerry, he would need only Ohio to win the White House.

But McCain's high command told me that they liked their chances in several states in the Democratic column, where their own polls show the race is either very close or the Arizonan holds a slight lead.

McCain has the edge in Democratic Michigan (17), where the economy is in a recession and Democratic Gov. Jennifer Granholm's Obama-like tax increase is unpopular. He leads in New Hampshire (4), which Kerry carried by a thin 1.3 percent, and is competitive in Pennsylvania (21) that Bush lost by 2 points and where Obama performed poorly in his party's primary.

Polls showing that McCain "holds a lead in states Bush lost in 2004 suggests that the November contest will be competitive," said longtime campaign analyst Amy Walter.

The ABC/Post poll, its first since the end of the primaries, contains a number of intriguing findings that suggest, with all of the head winds John McCain faces, Obama has many troubles of his own. Among them:

-- Party unity. While nearly nine in 10 Republicans are backing McCain, "not quite eight in 10 said they support Obama," the Post reported. Almost one-quarter of those "who said they favored (Hillary) Clinton over Obama" now say they will vote for McCain, "virtually unchanged from polls taken before Clinton suspended her campaign."

-- Experience. Obama "gained no ground on the question of whether he has the experience needed" to be president. Just 50 percent say "he has the necessary experience, almost the same as in early March."

-- Terrorism and Iraq. McCain has a 14-point lead on who can best deal with terrorism, the edge on foreign affairs and runs even on handling the war in Iraq, Obama's core issue.

Last week, Democratic national chairman Howard Dean said his party was still divided over its prospective nominee and that some Democrats were "reluctant" to support Obama.

Translation: This isn't shaping up to be the slam-dunk election many of us thought it would be.