Tax-and-Spend Democrats Just Don't Get It 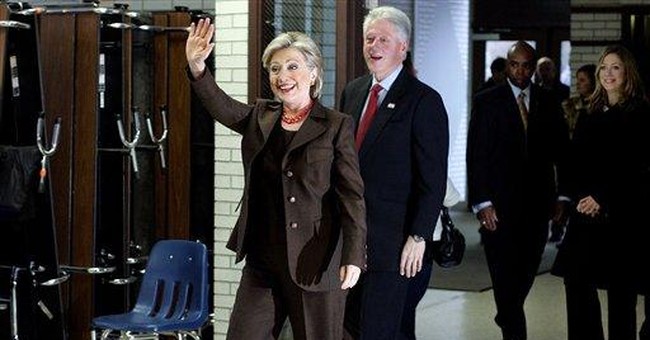 WASHINGTON -- Hillary Clinton has vowed throughout her presidential campaign to raise taxes on the richest Americans, but now the New York senator says she will postpone the tax hikes until the economy recovers.

Clinton's temporary retreat from her long-sought plan to raise taxes on the wealthiest taxpayers is surprising in and of itself. That she is basing her decision on the belief that higher income tax rates would further undermine a weakening economy is an unexpected bow to pro-growth, supply-side economics and the underlying rationale for President Bush's across-the-board tax cuts.

"She would let the two top rates go back up to their previous levels under President Clinton, though she's not for doing that now," said Gene Sperling, senior economic adviser to Clinton's campaign.

I asked Sperling why the former first lady, who has made bashing Bush's tax cuts the centerpiece of her presidential campaign, is she backing away from them now, even if only temporarily?

"She just thinks that we are at a point where we are bordering on a recession, and you want to do everything you can to inject demand into the economy right now," he replied.

Sperling, who was President Clinton's White House economic adviser, says something else that is equally revealing: Hillary Clinton has no intention of repealing any of the other Bush income tax cuts.

How many times have we heard Democratic leaders denounce the Bush tax cuts in toto as if they all were unnecessary? You never hear them say, we don't like the top rate cut, but cuts for taxpayers in all of the other tax brackets are needed and we'd keep them.

"The senator is for extending the (Bush) tax cuts for families making under $250,000," Sperling told me.

All of this begs the question: If cutting taxes across every income level, including the top two brackets, helps strengthen the economy when it is weak and skirting a recession, then wouldn't their retention continue to do that?

If, as Sperling said, Clinton wants to keep the lower tax rates in force throughout the economy's downturn to help it recover and grow stronger, why not make them permanent? Why take them away? Healthy economies always need plenty of consumer spending, savings and investment.

The only reason, of course, is that Clinton needs this money to pay for all of the programs she intends to establish to expand government's nanny role in every nook and cranny of our daily lives.

A nearly 40 percent tax rate on the top income earners can rake in a lot of revenue, but what will that do to the economy's long-term growth?

It will redirect and redistribute incomes away from business-expanding, job-creating capital investment, rechanneling more private sector income into bigger government that creates no new wealth and no new capital investment.

Barack Obama, Clinton's chief rival for the Democratic presidential nomination, talks a lot about "investment" but not in the way that it is used in the real world.

Obama would also raise the top tax rate on the wealthiest Americans to nearly 40 percent from 35 percent and boost taxes on corporations, capital gains and dividends.

"He doesn't favor giving special tax incentives for oil companies and for other corporations," said Austan Goolsbee, an Obama economic adviser at the University of Chicago.

Instead, he would "invest" this money in long-term growth, Goolsbee told me. "He is for programs that are about investing in science and technology, improving work skills, investing in alternative energy and transition from school to work programs."

This raises the question about who is the better investor. Who can peer into the future and know what are the technological innovations that will create new and as yet unseen markets and produce tomorrow's jobs -- Obama or the free market?

The Illinois senator has no background in investment, and no experience or record in the picking the technological advances that have made U.S. firms like Intel, Apple and Microsoft the most successful high-tech corporations on the planet.

The free market provided the venture capital that turned these and other successful start-up businesses into major job-creating machines, making the United States the richest and most successful economy in the world.

And who provided the capital investment that built them? That's right, the millions of investors that Clinton and Obama want to tax more so that they and a bunch of bureaucrats will be the ones to decide how that money should be spent instead of invested.

Not too long ago, Clinton said, "I've got a lot of ideas" how to grow the government. So does Obama. One of the first things he would do as president is to raise the federal minimum wage each year, every year. What he doesn't understand is that he would be pricing entry-level jobs out of existence as businesses find less labor-intensive ways to deliver the same product or service at a lower cost.

Go to a local supermarket and look at all those self-service checkout registers and you'll see what I mean.