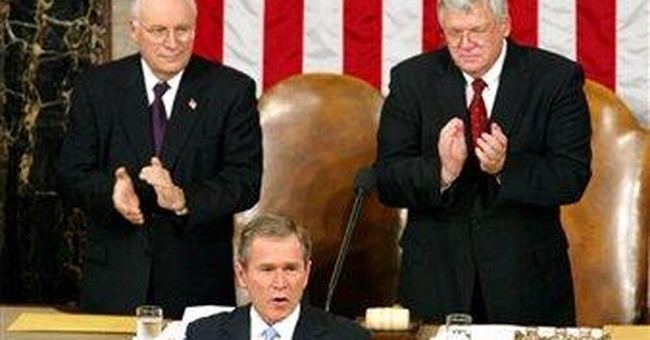 Two leftist organizations have released a study that claims that the Bush administration lied about Iraq. Somehow I think we've heard that one before. Well, the two groups--the Center for Public Integrity and the Fund for Independence in Journalism--managed to secure major media attention by making the claim that the Bush administration released 935 false statements. Clearly no one was in the mood to read all 935, so the leftist groups boiled them down to 532. We hear that on 532 occasions the Bush administration claimed that Iraq possessed weapons of mass destruction. So the claim is not that Bush told 532 lies, but that he told the same lie 532 times.

But consider this: If Bush actually knew that Iraq didn't possess weapons of mass destruction, and yet repeatedly told the American people that Iraq had them, didn't Bush expect that following the Iraq invasion his deception would be found out? When I raise this point with liberals on campus, they typically say, "Well, we're not saying that Bush knew for sure that there were no such weapons. We are saying that his administration stacked the data." But this is another way of saying that Bush actually believed that there were those weapons, and he mobilized whatever evidence he could muster to make his case. This may reflect prejudice against Saddam Hussein's motives or even imprudent decision making but it is hardly proof of lying.

Consider a similar decision made by President Roosevelt. In the period leading up to World War II, a group of refugee German scientists warned Albert Einstein that the Germans were building an atomic bomb. The project was headed by that country's greatest scientist, Werner Heisenberg. Acutely aware of the dangers of Hitler getting such a weapon, Einstein took this information in the fall of 1939 to President Roosevelt, who commissioned the Manhattan Project. America built the bomb, and later dropped two of them on Japan.

Many years later, Americans discovered that the Germans were nowhere close to building an atomic bomb. Their project was on the wrong track, and it seems to have stalled in its infancy. Some historians believe Heisenberg was trying to thwart the project from the inside. Be that as it may, in retrospect we now know that the intelligence that led to the Manhattan Project was wrong. But no one goes around saying, "Einstein lied" or "FDR lied." They didn't lie. They used the information they had to make a tough decision in a very dangerous situation.

The same is true of Bush. As a statesman, he had to act in the moving current of events. He didn't have the luxury of hindsight. To those leftist pundits who say, "Knowing what we know now, President Bush, why did you do what you did then?" Bush's answer is, "Obviously I didn't know what we know now." Acting against the somber backdrop of 9/11, Bush made a hard call based on an assessment of the intelligence provided to him.

He may have acted in haste, and he may have acted in error. But even this is not so clear. Do you recall recent reports from the CIA that Iran stopped working on its nuclear program in 2003? The reports were interpreted as a reversal for the Bush administration, because Bush has allegedly been trying to raise public concerns about Iran’s nuclear program. But many people forgot to ask why Iran’s mullahs decided to suspend their nuclear program in 2003. That happens to be the time that America invaded Iraq. So it’s quite possible that the Iranian mullahs were deterred from their nuclear ambitions because of the fear that the U.S. military might call on them next.

Whatever you think of this analysis, there is no evidence that Bush made his decision about the Iraq war in bad faith. Therefore the claim that Bush lied is itself a lie.