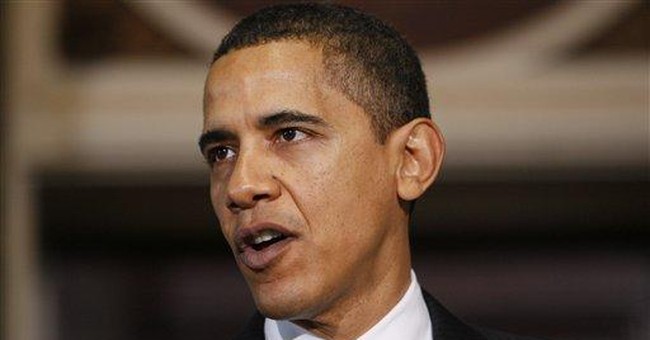 In one of the most eloquent presidential addresses to Congress, with strains of FDR and JFK and a touch of Winston Churchill thrown in, President Obama has clearly staked his presidency on the outcome of the economic crisis.

Whether you agree or not with his prescription for recovery -- I don't -- it is clear that he is not hedging his bets. If it works, his place in history is assured. If it fails, so is his early retirement.

The speech made it apparent that Obama's Administration's response to this crisis will either go down in the history of political science as a success Americans will admire for decades or become a case study in economic failure students and scholars will study and pick apart for generations.

The speech began where it needed to begin -- with a bold affirmation of faith in the rebuilding and recovery of America. Then the president listed some of the more popular parts of his spending-stimulus program. The specific items he recalled from the package were attractive.

But Americans know, by now, that much of the program, largely unmentioned by the president, is a mountain of pork, money spent for the sake of spending it to spur recovery, not to achieve particularly important ends.

Obama did not seek to justify the spending for the specific purposes to which it is dedicated. Courageously, he said that he passed it because it will work. For his sake, it better. But I doubt it.

Then the president spoke unconvincingly about his bank rescue plan. Promising to punish and regulate bankers even as he stressed the need to restore their confidence, he reminded me of the facetious sign posted in a friend's workplace, "The beatings will continue until morale improves."

How he plans to restore the nerve and confidence of our bankers as he castigates them was unclear. But so is his program for financial rescue. One suspects that he knows full well that he will nationalize the banks. But even that step says that politicians can do what bankers cannot -- act quickly, ruthlessly and honestly -- never a notable attribute of elected officials.

Halfway through the speech, the president got to the minefields of Social Security and health care reform. He avoided any specifics, but it is clear that he plans to salvage the former by increases in the payroll tax and implement the latter by government rationing of health care. If you like your HMO, you will love Obama's health plan.

And then, Obama affirmed that he will support big tax increases on the richest 2 percent of American families. Disregarding the fact that these households already pay upward of half of the income taxes, while earning only a quarter of the national income, he singled out the entrepreneurs, professionals, innovators and businesspeople of America for taxation. But he won't raise taxes until he's had a few years to stimulate the economy. He makes one feel like one of the huge hogs in the Chicago stockyards, being fattened up to slaughter the next year.

Can all this work? Can Obama get banks to lend even as he terrorizes them? Can he get the engines of our economy back to work even as he announces that he will take away more of their earnings? Can he persuade the American people to accept bureaucrats deciding their health care choices? And can his economic stimulus survive a huge increase in the payroll tax on the most productive citizens?

Probably not. Obama will likely not succeed. This speech will be viewed as his high water mark, the time before we came to realize how flawed is his understanding of economics and how supreme is his commitment to expanded spending. It will be seen as a sort of age of innocence before we realized what he had in mind. But it was a great speech ... while it lasted.