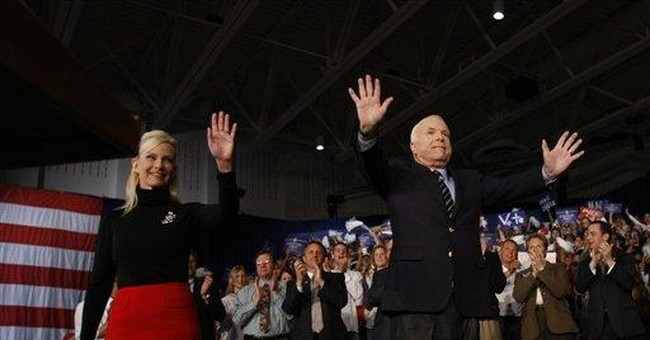 For McCain to win this election (which he still can) the furor over the stock market will have to calm down so that popular attention can focus on Barack Obama. For all of the deluge of media that has engulfed the American people, they can only keep one subject on their mind. All media has only one focus at a time. And, if you are in the spotlight, you are almost certain to self-destruct.

Follow this election cycle. Between the summer of 2007 and the end of February of 2008, all focus was on Hillary Clinton's ups and downs. And Obama defeated her decisively. Then in March and April of 2008, Obama was in the focus and Rev Wright and the surrounding controversy propelled Hillary to victory. Then during the summer of 2008, all eyes were on Obama and he gained. In September, McCain was on the griddle. At first his selection of Sarah Palin let him move ahead. But then his "suspension" of his campaign and subsequent complicity in the bailout package cost him his lead and moved Obama to an advantage just short of double digits.

Now the attention should logically shift to Obama. He is way ahead and McCain is nowhere to be seen. Few give McCain any chance and the debate is over whether the race is over already. This is, of course, the ideal environment for a McCain surge. All attention would normally focus on the Democrat. But it isn't. Every American checks the market before they check the polls. The ongoing anxiety over the stock market is not only giving more and more people reason to hate the Republicans of Wall Street and their allies in Washington, but it is keeping us from focusing on Obama.

If ever the market stabilizes, Americans will be fascinated by the Ayers-Obama ties and the relationship between Farrakhan and the Democratic nominee. The increasing evidence that ACORN is committing voter fraud, registering people over and over again in anticipation of stuffing the ballot box on election day. As ACORN gets raided by the FBI, it will hurt Obama. He was general counsel to its Illinois affiliate and Obama channeled millions to the radical group when he got control over the money William Ayers got from the Annenberg Foundation.

All of these ties are damning for Obama and will reinforce the doubts that Rev. Wright first put in our minds. They will lead people to question Obama's values and his fitness for the presidency. A man whose spiritual advisor is Rev Wright, whose financial backer is Rezco, and whose first major employer was William Ayers might not be a good choice for president. But for these associations to loom large enough in our consciousness to impact our vote, the market has to settle down so we can hear the campaign over its din.