Magic Words: "I Love This Country" 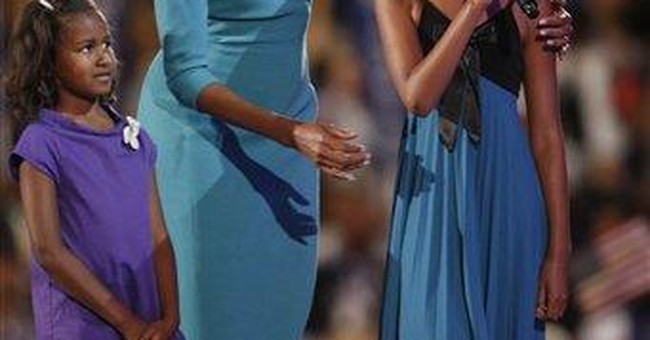 'I love this country": Those are the magic words that Michelle Obama said at the Democratic National Convention last night.

They're the words we've wanted to hear from her ever since we saw her say that she was proud of her country "for the first time in my adult life" now that her husband was winning primaries en route to the White House.

Did she buy into the American dream? Was she part of our national aspiration - or part of the Rev. Jeremiah Wright's twisted view of us? Those were the questions we wanted answered. Last night, she answered - loud and clear.

But this year we saw an eloquent, sincere woman speaking of her dreams and aspirations. She gave a speech that sounded real with anecdotes that seemed genuine.

Michelle Obama last night became a political plus, not a problem.

We worried that Barack was an elitist. But her speech made it clear that she wasn't born as part of the elite and that he wasn't either. Her genuine working-class stories transcended race and rang true with Americans.

By bringing her husband down to earth, Michelle reassured us. But when she began reeling off the stories, we couldn't help wondering if it wasn't too much. OK, we found ourselves saying, You didn't grow up as elitists. You can reach back for the stories and the memories. But what about now? What about the future? You started off poor, but have you gone Ivy League on us?

Listening to her, we couldn't help feeling that we've heard it all before from Barack Obama himself. Couldn't help wondering if there was more than just the rhetoric and the emotion, no matter how sincerely and obviously felt.

Michelle, essentially, gave Barack's standard speech for him. Now it's up to Barack to put meat on the skeleton and flesh out his agenda - to go beyond her words and emotions and give us programs, concrete ideas and commitments. The generalities have worked before but, to quote Sen. Obama, "not this time."