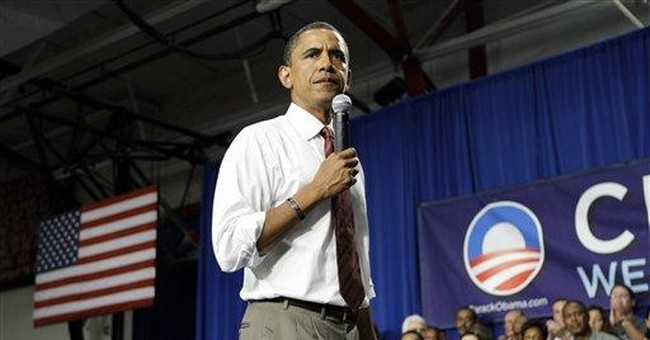 Last week raised important questions about whether Barack Obama is strong enough to be president. On the domestic political front, he showed incredible weakness in dealing with the Clintons, while on foreign and defense questions, he betrayed a lack of strength and resolve in standing up to Russia's invasion of Georgia.

This two-dimensional portrait of weakness underscores fears that Obama might, indeed, be a latter-day Jimmy Carter.

Consider first the domestic and political. Bill and Hillary Clinton have no leverage over Obama. Hillary can't win the nomination. She doesn't control any committees. If she or her supporters tried to disrupt the convention or demonstrate outside, she would pay a huge price among the party faithful. If Obama lost - after Hillary made a fuss at the convention - they would blame her for all eternity (just like Democrats blame Ted Kennedy for Carter's defeat).

But, without having any leverage or a decent hand to play, the Clintons bluffed Obama into amazing concessions. Hillary will speak on Tuesday night in prime time. Chelsea will introduce her. She will get to play a film extolling her virtues produced by Harry Bloodworth Thomason. Bill will speak on Wednesday night. Hillary's name will be placed into nomination. She will get to have nominating and seconding speeches on her behalf. And, on Thursday night, the last night of the convention, the roll call will show how narrowly Obama prevailed.

If Obama can't stand up to the Clintons, after they have been defeated, how can he measure up to a resurgent Putin who has just achieved a military victory? When the Georgia invasion first began, Obama appealed for "restraint" on both sides. He treated the aggressive lion and the victimized lamb even-handedly. His performance was reminiscent of the worst of appeasement at Munich, where another dictator got away with seizing another breakaway province of another small neighboring country, leading to World War II.

After two days, Obama corrected himself, spoke of Russian aggression and condemned it. But his initial willingness to see things from the other point of view and to buy the line that Georgia provoked the invasion by occupying a part of its own country betrayed a world view characterized by undue deference to aggressors.

We know so little about Obama. His experience is so thin that it's hard to tell what kind of a president he'd be. While he nominally has been in the Senate for four years, he really only served the first two and consumed the rest of his tenure running for president and disregarding his Senate duties.

So we have no choice but to scrutinize his current transactions and statements for some clue as to who he is and what he'd do. In that context, his reaction to the first real-time foreign-policy crisis he faced as a nominee leaves his strength in doubt. So does his palsied response to the Clintons' attempt to make Denver a Clinton convention.

Is Obama an over-intellectualizing Hamlet who is incapable of decisive, strong action? With Iran on the verge of acquiring nuclear weapons and Russia resurgent, there isn't much room for on-the-job learning.