Dick Morris and Eileen McGann  |  Mar 27, 2008
The opinions expressed by columnists are their own and do not necessarily represent the views of Townhall.com.
Top Columns
Trending on Townhall Media 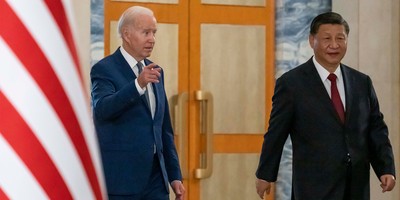 The USA Today/Gallup survey clearly explains why Sen. Hillary Rodham Clinton (D-N.Y.) is losing. Asked whether the candidates were “honest and trustworthy,” Sen. John McCain (R-Ariz.) won with 67 percent, with Sen. Barack Obama (D-Ill.) right behind him at 63. Hillary scored only 44 percent, the lowest rating for any candidate for any attribute in the poll.

• Hillary was named after Sir Edmund Hillary. (She admitted she was wrong. He climbed Mt. Everest five years after her birth.)

• She was under sniper fire in Bosnia. (A girl presented her with flowers at the foot of the ramp.)

• She learned in The Wall Street Journal how to make a killing in the futures market. (It didn't cover the market back then.)

Whoppers She Won't Confess To

• She didn't know about the FALN pardons.

• She didn't know that her brothers were being paid to get pardons that Clinton granted.

• Taking the White House gifts was a clerical error.

• She didn't know that her staff would fire the travel office staff after she told them to do so.

• She opposed NAFTA at the time.

• She was instrumental in the Irish peace process.

• She urged Bill to intervene in Rwanda.

• She played a role in the '90s economic recovery.

• The billing records showed up on their own.

• She thought Bill was innocent when the Monica scandal broke.

• She was always a Yankees fan.

• She had nothing to do with the New Square Hasidic pardons (after they voted for her 1,400-12 and she attended a meeting at the White House about the pardons).

• She negotiated for the release of refugees in Macedonia (who were released the day before she got there).

With a record like that, is it any wonder that we suspect her of being less than honest and straightforward?

Why has McCain jumped out to a nine-point lead over Obama and a seven-point lead over Hillary in the latest Rasmussen poll? OK, Obama has had the Rev. Wright mess on his hands. And Hillary has come in for her share of negatives, like the Richardson endorsement of Obama and the denouement of her latest lie — that she endured sniper fire d uring a trip to Bosnia. But why has McCain gained so much in so short a period of time? Most polls had the general election tied two weeks ago.

McCain's virtues require a contrast in order to stand out. His strength, integrity, solidity and dependability all are essentially passive virtues, which shine only by contrast with others. Now that Obama and Hillary are offering images that are much weaker, less honest, and less solid and dependable, good old John McCain looks that much better as he tours Iraq and Israel while the Democrats rip one another apart.

It took Nixon for us to appreciate Jimmy Carter's simple honesty. It took Clinton and Monica for us to value George W. Bush's personal character. And it takes the unseemly battle among the Democrats for us to give John McCain his due.

When Obama faces McCain in the general election (not if but when) the legacy of the Wright scandal will not be to question Obama's patriotism or love of America. It wil l be to ask if he has the right stuff (pardon the pun).

The largest gap between McCain and Obama in the most recent USA Today/Gallup Poll was on the trait of leadership. Asked if each man was a “strong, decisive leader,” 69 percent felt that the description fit McCain while only 56 percent thought it would apply to Obama. (61 percent said it of Hillary.) Obama has looked weak handling the Rev. Wright controversy. His labored explanation of why he attacks the sin but loves the sinner comes across as elegant but, at the same time, feeble. Obama's reluctance to trade punches with his opponents makes us wonder if he could trade them with bin Laden or Ahmadinejad. We have no doubt that McCain would gladly come to blows and would represent us well, but about Obama we are not so sure.