Why Hillary Will Lose 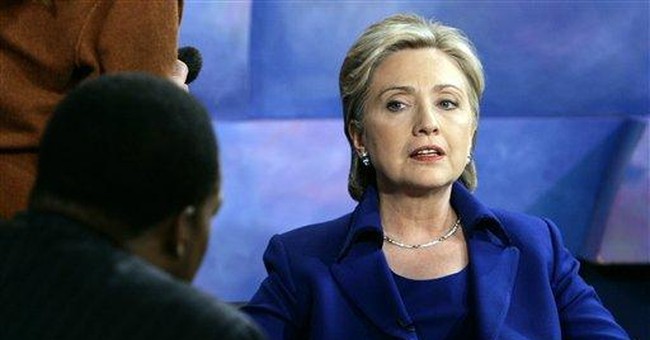 Hillary Clinton has blown an almost sure shot at the Democratic presidential nomination. Having surrendered the lead to Obama, she is not likely ever to regain it. It is a fantasy that the Ohio and Texas primaries will be a “firewall” to contain the flames of enthusiasm for Obama and reverse her defeats of February. Just as with Giuliani’s supposed Florida firewall, Hillary’s will crumble as Obama’s momentum carries him forward to the nomination.

Before Hillary lost her first primary or caucus, she lost the dialogue with the Obama campaign vis-à-vis the totally misguided decision to focus her message on experience, surrendering the ground of change to her opponent.

The more she tried to emphasize Obama’s inexperience, the more she seemed to fence herself into the status quo. That it was the status quo ante of the Clinton years, not the status quo of the Bush administration, made less and less difference as the campaign progressed.

She ran on a message perfect for a Republican primary — experience — and abandoned the key to winning a Democratic primary — the message of change — to Obama.

Her decision to rely on special interest political action committee and lobbyist contributions and to seed her war chest with the checks of maxed-out donors gave substance to Obama’s contrast of the status quo vs. change. With her chief strategist a lobbyist and her top campaign team all in the business, she was awash in associations that crippled her ability to fight for change.

Obama became the attraction in th e race while Hillary recited her laundry list of proposals with a deadening monotony.

She could have waged a grassroots, small-donor, Internet campaign of change based on being the first woman running for president with a serious chance of victory. The charisma could have been hers, the excitement hers and the novelty hers. But by embracing experience and pretending to be safe and tested, she deadened the excitement her candidacy could have generated.

She got a reprieve by winning in New York/New Jersey and in California/ Arizona largely on the strength of Latino and immigrant voters. Their concentration in five key states (75 percent live in California, New York, Illinois, Florida and Texas) gave her a draw on Super Tuesday. But too many of her votes come from Hispanics who fear blacks and from older whites who harbor residual racial feelings. Her and Bill’s heavy-handed attempts to polarize the election racially d ied on Super Tuesday in an avalanche of votes from white states like Utah, Idaho, Colorado, Kansas, North Dakota and the like.

As the election turned from Super Tuesday to the heartland, where there are few Hispanics or new immigrants, Hillary’s campaign has lost its momentum and its prospects of victory. Obama’s victories in Maine, Nebraska, Louisiana and Washington state, and his probable wins in Virginia, D.C. and Maryland, show how complete is his mastery of states without immigrants blinded by the Clinton name to sustain it. Hillary’s hopes for victory in Wisconsin, Ohio, Pennsylvania, Indiana and North Carolina are a fantasy. The Latino population in those states is well below 10 percent and not enough to carry her to victory.

The super-delegates will not be enough to reverse Obama’s primary and caucus victories and they will run for cover and join the Obama bandwagon anyway.

Besides losing the rhetorical battle, Hillary will have nowhere near the money that Obama will have. Her preparations for a short war based on maxed-out donors and old politics were disastrously shortsighted, while Obama wisely cultivated online contributors who can regenerate with the click of a mouse.

When Barack Obama beat Al Gore to the punch and jumped into the presidential race while the former vice president was still deciding what to do, it seemed that Hillary had virtually wrapped up the nomination. While Gore could have beaten Mrs. Clinton, it seemed unlikely that a senator with two years’ service under his belt could do so.

But the mistakes and strategic errors of the Clinton campaign gave Obama an opening that he exploited masterfully. It is Obama’s charisma that is winning this election, but it was Clinton’s mistakes that opened the door.