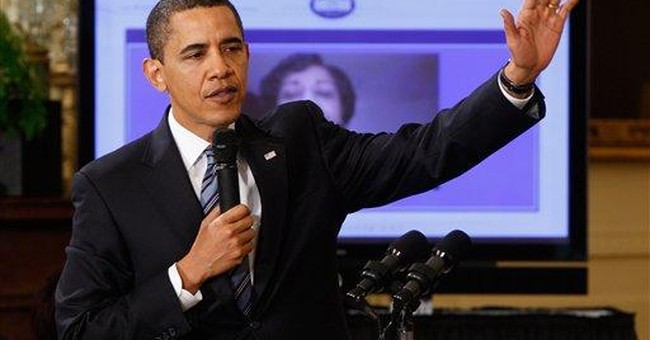 The following takes place in an unseen episode of "24."

Tony Almeda, glowering, is watching the President live on a television in a coffee shop across the street from the White House.

The President (on screen): "In particular, I would like to speak directly to the people and leaders of the Islamic Republic of Iran. Nowruz is just one part of your great and celebrated culture...."

Without taking his eyes off the screen, Tony punches in a number on his cell.

Jack Bauer answers. "Yeah," he breathes, also watching the president on a mirror server uploaded to his monitor.

The President: "Over many centuries, your art, your music, literature and innovation have made the world a better and more beautiful place...."

Tony: "Are you watching the President?"

Jack, making his way to his car as he downloads a frame grab to his PDA: "Copy."

Tony, walking toward the White House: "What's he talking about, 'innovation'? Does he mean the high-tech armor-piercing roadside bombs Iran "innovated" to kill and maim hundreds of U.S. troops in Iraq?"

Jack, now speeding across the 14th Street Bridge into downtown Washington: "Copy. And notice the specific reference to 'the leaders of the Islamic Republic of Iran.' The president is directly addressing A-jad and the mullahs, and thus in some unprecedented way America is now legitimizing the 1979 Khomeini revolution."

Tony: "Copy that, too. Are you thinking what I'm thinking?"

Jack: "Copy. No American president would ever, could ever, lower himself and our nation to grovel like this to that vicious Islamic regime. Unless -- Tony, someone's gotten to the president. He's in trouble."

Tony, eyes narrowing as he peers at the White House: "Copy."

The President (on Jack's car radio): "We know that you are a great civilization and your accomplishments have earned the respect of the United States and the world...."

Jack parks near the White House and joins Tony by the fence.

Jack: "Someone must be forcing the president to make this broadcast, Tony, forcing him to grovel to the mullah-ocracy. We need weapons, surveillance equipment, thumbtacks, quick." Punches in a number on his cell."

The President: "We seek instead engagement that is honest and grounded in mutual respect...."

Jack: "The president is being coerced into surrendering to Iran."

Chloe: "I know. I'm watching. How else could he talk about 'mutual respect' with a regime obsessed with Holocaust denial, nuking Israel and destroying America?"

Chloe: "Jack, who could be making the president do this?!"

Jack: "We don't find out for a few more episodes, Chloe. You know that."

Chloe: "OK. Listen, I just accessed encrypted Secret Service bandwidths to confirm the President's children are at school, but what about the First Lady? Do we have a visual?"

Tony, urgent: "Jack, I think I see the First Lady being held by weird-looking hostiles in white coats in that untamed thicket over there."

Jack, looking up: "No, that's just the First Lady with her chefs in the new White House organic vegetable garden. Chloe, I need the most current CIRG logs and recognition codes for entry in the Oval Office."

From a duct over the Oval Office, Jack and Tony hear the President wrapping up as Jack noiselessly drills an eyehole in the plaster wall.

The President: "With the coming of a new season, we're reminded of this precious humanity that we all share."

Jack, under his breath: "Precious humanity we share? What about the regime's hanging of homosexuals and stoning-to-death of adulterers? Tony, just recently a 25-year-old Iranian blogger named Omidreza Mirsayafi died during his two-year prison term for 'insulting' Ayatollah Khomeini and criticizing the government."

Tony: "The President must be under incredible duress. We've got to save him."

The President, concluding: "Thank you and Eid-eh Shoma Mobarak."

An Aide: "OK. All clear. Thank you, Mr. President. We'll get you up on YouTube within the hour."

The President: "I want it out on Al Jazeera, too."

Surreptitiously, Jack peers into the room.

The President: "Thank you all. That was great. I've been wanting to do that for a long time. Now, when is the Islamic Republic of Iran's actual Independence Day -- or whatever they call it? Maybe we can send them a cake, or pie, or something."

Tony: "How many hostiles, Jack?"

Jack is still surveying the apparently peaceful scene when the First Lady enters.

Jack: "No hostiles, Tony. Or maybe all hostiles." Punches in a number on his cell. "Chloe, download the reverse quadralinear coordinates to my PDA so we can get out of here. The President of the United States just groveled to Iran because he wanted to. And that makes this whole thing one lost episode."