Derek Hunter
|
Posted: May 23, 2021 12:01 AM
Share   Tweet
The opinions expressed by columnists are their own and do not necessarily represent the views of Townhall.com. 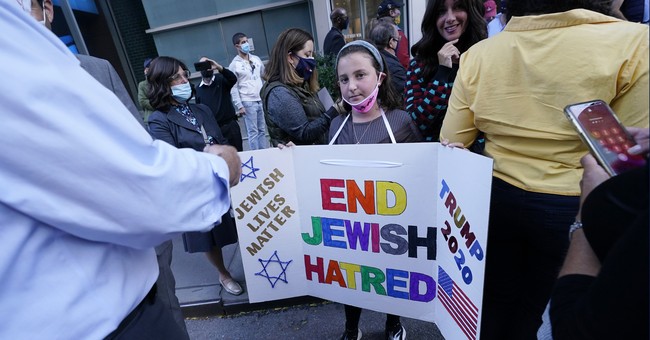 Everyone knows hate is the exclusive domain of the right, right? I mean, I’ve seen MSNBC, and truth-teller Joy Reid would never lie, nor would the gang at Morning Joe. I’ve also watched CNN, where Chris Cuomo and Don Lemon have assured me the only lies in media come from conservatives. That means it must be true, because they’ve won journalism awards, and they don’t give those out to just anyone…only to just about everyone.

Of course, these people not only lie, it’s the main thing they do for a living. When not lying, they are ignoring, sweeping stories that don’t jibe with what they want their audiences to know. The main reason the left-wing media industrial complex despises conservative journalism and commentary is not that they hate the competition, though they do, it’s because we show the world what the left used to be able to hide.

For all its faults, and there are plenty, the Internet allowed conservatives to show the world what used to be left on the cutting room floor. The left absolutely hates that.

They used to be the arbiters of what is and isn’t “newsworthy.” If they ignored a story, it wasn’t news. If the three broadcast networks and your city’s newspaper didn’t cover a story, people didn’t know about. The power to ignore was nearly absolute. A couple of weekly or monthly magazines and Rush Limbaugh were the only alternatives to their power.

Now everything is out there. Blogs, websites, Facebook and Twitter have all been weaponized to show the raw, unfiltered stories the left does not want people to know. The “share” and “retweet” buttons, though created by leftists for fun and profit, have been successfully weaponized to diminish their power in ways they haven’t yet accepted.

This power was on full display this week as roving gangs of Democrats attacked Jews on both coasts. Bastions of “tolerance” saw people physically attacked by leftists for the crime of existing wrong; being the “wrong” kind of person.

The media did their best to ignore it, elected Democrats did completely. The President, Vice President, Speaker of the House, and Senate Majority Leader collectively didn’t say a damn thing. Establishment news outlets barely covered it. It’s so pathetic that the New York Times has written more stories about attacks on Jews in Los Angeles (2) than they have about attacks on Jews in New York City (0).

Honestly, terrorist supporters have beaten the hell out of New Yorkers for being Jewish, in full daylight on the streets, and threw an explosive device at them all in full view of camera phones and police, and the hometown paper of the city wrote 2 stories about an attack 3,000 miles way. Not that the disgusting attack in LA wasn’t newsworthy, but you’d think attacks in New York might make the New York paper.

These stories don’t rate for very specific reasons – the perpetrators are unhelpful to the liberal cause.

It’s a sick repeat of the 20 minutes leftists pretended to care about anti-Asian hate crimes until all the footage surfaced showing almost all of the attacks were perpetrated by African-Americans. As if with Jedi efficiency, “These are not the Trump supporters you are looking for” and – poof – the story was gone.

The perpetrators of the attacks on Jews are by Palestinian-Americans and left-wing college students, encouraged by Members of Congress. How can the media report on the hate led by the people they’ve portrayed as heroes? People, who in many respects, they helped create.

Without the puff-pieces and propping up, Alexandria Ocasio-Cortez would be would just another vapid narcissist with an inflated sense of self; an American Prince Harry with boobs rather than being one. Ayanna Pressley wouldn’t be known at all, because what’s so special about a left-wing lunatic from Massachusetts? Ilhan Omar would be that Member of Congress who married her brother and laundered a fortune through her campaign to her current husband in a perfectly legal scam. And Rashida Tlaib would be the squealing weirdo from Michigan who lasted only long enough to remind voters why the emotionally unstable need professional help, not elected power.

Without hate, there is little that unifies the left. Without that common bond, without a common enemy, the Democrat coalition is a bunch of disparate groups ready to turn on one another for supremacy. I have to admit, I’d like to see that – a fatal dose of their own medicine as each group of Americans subdivided and conditioned to view themselves as victims scramble for the top of the pile.

But I’d rather just beat them, because they deserve it more than any political, power-mad group of people has ever deserved it. Maybe that’s hate, I don’t know. But I also know I don’t care. They deserve it.