Derek Hunter
|
Posted: Feb 16, 2020 12:01 AM
Share   Tweet
The opinions expressed by columnists are their own and do not necessarily represent the views of Townhall.com. 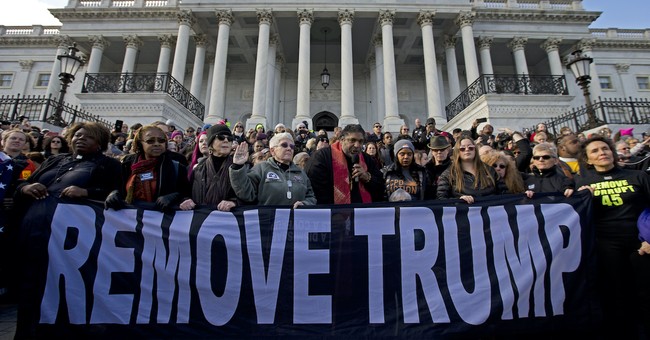 Whatever it is, whatever might be wrong in your life, it’s all Donald Trump’s fault. You probably didn’t know that, you likely thought it was something you did, some bad choice you made in the course of your life that resulted in your being in whatever situation you might find yourself, but you’re wrong – it’s Trump.

At least that is the message you’re currently being bombarded with if you consume any media whatsoever.

Have your health insurance premiums increased? It’s not the fault of Democrats and their Obamacare mess, it’s Trump’s refusal to “fix” the problem. Of course, when Obama was still president and Republicans attempted to point out obvious flaws in the law, even before it was implemented, they were denounced as racists. When they tried to change any part of it, they were told they couldn’t because it was “settled law.”

Now every Democrat running for president has a plan to “fix our broken health care system,” and none are met with a similar reaction. They claim it’s all Trump’s fault, and they’re the ones to make it better (who better to fix something than the people who broke it?).

The Justice Department seeks to put a non-violent, first-time offender away for the better part of a decade for misleading Congress, which the president rightly thinks is a bit harsh. Suddenly, there is a crisis of confidence in the justice system and outrage ensues. “How dare the president try to pervert justice?!?!” they cried. Perhaps they would have preferred Donald Trump simply said prosecutors “acted stupidly,” or if he’s had an elderly son he’d look like Roger Stone?

For having the same thought, the Washington Post declared the Attorney General to be the president’s “wingman” rather than someone interested in actual justice. Not mentioned: when Barack Obama’s AG literally called himself the president’s wingman. (Honestly, it’s like these journalists didn’t follow the news or history didn’t exist between 2009 and 2017.)

Trump, not only by not being convicted and removed from office, destroyed faith in the justice system, one tweet at a time. But fear not, Democrats have promised retribution for those 280-characters-at-a-time assaults on justice; they want to set up a commission to investigate anyone associated with the president and his supporters to see if they may have violated any laws, thereby restoring faith in the impartiality of the system. Or something.

You name the issue, whatever happens to be wrong with it is the fault of the president. It’s a neat trick.

Unemployment is near historic lows, there are more jobs than job-seekers, but that’s somehow a disaster Democrats will fix. Have large student loan debt you can’t pay off? It was Donald Trump who made you choose an overpriced out-of-state university rather than attend an affordable in-state college, not to mention how he pressured you into majoring in bi-sexual polar bear with a minor in interpretive social justice dance studies rather than something marketable.

If you have a problem, no matter how self-inflicted, there is a Democrat anxiously awaiting a chance to absolve you of responsibility for it, just as they absolve themselves. They aren’t running for president; they’re running for Pope. Absolution is only a wave of their hand, or the stroke of a magic pen, away. All you have to do is cede them your vote and a little piece of your dignity.

This election isn’t a “change election.” It’s a last-chance election. Democrats have blamed the president for everything, big and small, and are offering a government program to remove the last vestiges of personal responsibility and all it will cost is our individual liberty. “We will solve all of your problems, all you have to do is become a de facto ward of the state” is the siren call of tyranny.

Sadly, there are about 40 percent of American voters who will curse Donald Trump if their car battery is dead tomorrow morning, like the president swung by in the night and turned their lights on.

Absolution from responsibility for what’s wrong in their lives is appealing to some because the thought of the reflection in the mirror being to blame for their problems is something they’re not willing to accept. Democrats live in this area of denial; they’ve perfected their sales pitch to those hoping to outsource blame for their shortcomings. They’ve always blamed Republicans in general, to limited success. Now they’ve narrowed their focus, putting everything on the president. It’ll make everything easier for them come November, when they lose, they’ll know exactly who to blame.

Derek Hunter is the host of a free daily podcast (subscribe!), host of a daily radio show onWCBM in Maryland, and author of the book, Outrage, INC., which exposes how liberals use fear and hatred to manipulate the masses. Follow him on Twitter at @DerekAHunter.