Vaping Saves Lives, Whether Politicians Like It Or Not

Derek Hunter
|
Posted: Sep 17, 2019 12:01 AM
Share   Tweet
The opinions expressed by columnists are their own and do not necessarily represent the views of Townhall.com. 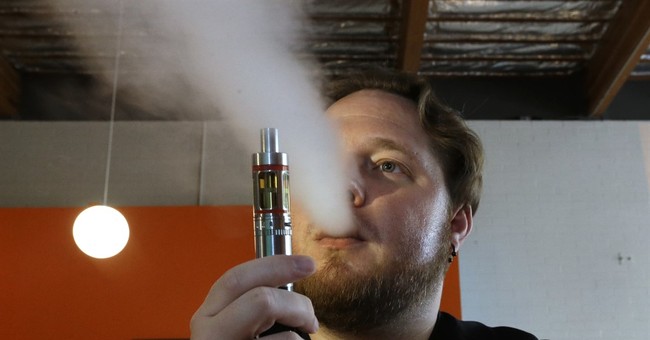 Growing up in Michigan, I fell into a habit many blue-collar Michiganders found themselves stepping into: smoking. For the better part of 20 years, I was pumping smoke into my body as a I commuted to college or hung out in any number of bars downtown. I tried everything short of hypnosis to quit, and failed every time. Until, that is, I saw a coworker vaping one day. Soon after, I was done. Vaping saved my life, and the lives of countless others. So imagine my disgust at seeing Michigan Governor Gretchen Whitmer, along with governors across the country, and even the president, push banning flavored e-cigarettes, the single most effective tool for quitting smoking.

The first week of September was the 4-year anniversary of my last cigarette, on the day I was married. On that day, I was done; liberated by an alternative that, unlike everything else I tried, worked.

How bad was I? While attending college in Detroit it wasn’t uncommon for me to collect bottles and cans to supplement my meager income. I’d get $10 in returnables, buy a pack of smokes at a gas station and, while handing over the bill, say, “And the rest on pump 7.”

After graduation and moving to Washington, DC, for my first job that required me to shower before work, I could afford my habit. So the days of paying with empty beer and pop cans were gone, but the habit remained.

Smoking was my priority, peaking with 2 packs per day, and sometimes as many as 3, if I’d gone out for drinks. Now I take a drag on my vape pen.

Gone is the smell, gone is the tar and the stained fingers, gone are cigarette hangovers only a heavy smoker understands. I can breathe again.

There was a time when I’d get winded walking up a hill. Not to the point that I couldn’t do it, but I’d definitely huff more than anyone my age should have.

So why ban this miracle?

Government officials says it’s for the children. How many abusive and failed government policies have used this sentiment as cover?

“Companies selling vaping products are using candy flavors to hook children on nicotine and misleading claims to promote the belief that these products are safe. That ends today,” Governor Whitmer said when announcing her ban.

This is an insane justification. Medical marijuana is legal in many states, including Michigan. And I’d be willing to say that children manage to get their hands on pot through family members with prescriptions and straw purchases. Are governors calling to close dispensaries? Of course not.

You can’t drive down 8 Mile Road in Detroit without seeing them, neon lights glowing all hours of the day. If Ms. Whitmer were really concerned about kids, this would bother her. The government makes too much money off them to care. Which is the same of cigarettes. The government makes a huge chunk of change off them, and they don’t enjoy seeing that gravy train derailed.

Yet, smoking, which costs all governments a fortune in medical and productivity costs, must be protected? Make no mistake about it, “big tobacco” and government are who benefits from these bans.

I’ve never been a candy or fruit flavored vape user, I stick to tobacco flavored. I didn’t smoke cotton candy or sticky buns, I smoked cigarettes. But I have friends who use all manner of flavors in their vape kits and pens. The flavor matters less than the fact that they’ve quit the cancer sticks.

There are no guarantees in life. Quitting smoking does not mean you’re in the clear. My father, a retired UAW worker, was a smoker until about 10 years ago. Cold turkey worked for him. He was recently diagnosed with lung cancer. They caught it very early, thankfully, and we’re hopeful we’ll find out in a few weeks that his treatment worked.

But quitting smoking is the next best thing you can do for your lungs after not starting in the first place. For many of us, for all manner of stupid reasons, not starting isn’t an option. Vaping, however, is. And despite what you’ve heard, despite the hysteria, it works.

Why limit options for people desperate to quit what we know will kill them because others will break the law and provide that product to kids? Children will always get their hands on things we don’t want them to have, it’s up to parents and society to make sure we stop them when they do.

Some vape companies like Juul are all in favor of regulations and bans, it makes it harder for new competitors to come into being. They don’t care about people looking to quit smoking any more than politicians do. If they did they’d offer a nicotine-free version of their product, since that’s what they say “hooks” the kids. Treat their product like a stop-smoking tool with step-downs nicotine levels to wean people off it. But like government when people quit, there’s no money in it. They’re either getting really bad advice or ignoring good advice by welcoming in government. If they truly dislike their product, perhaps they should stop making it?

Vaping saves lives. Bans are pure political posturing designed to make politicians look like leaders on a “flavor of the month” political issue. In a way, they are. By banning flavored e-cigarettes, they’re condemning smokers to keep smoking, and ultimately “leading” them to an early grave.